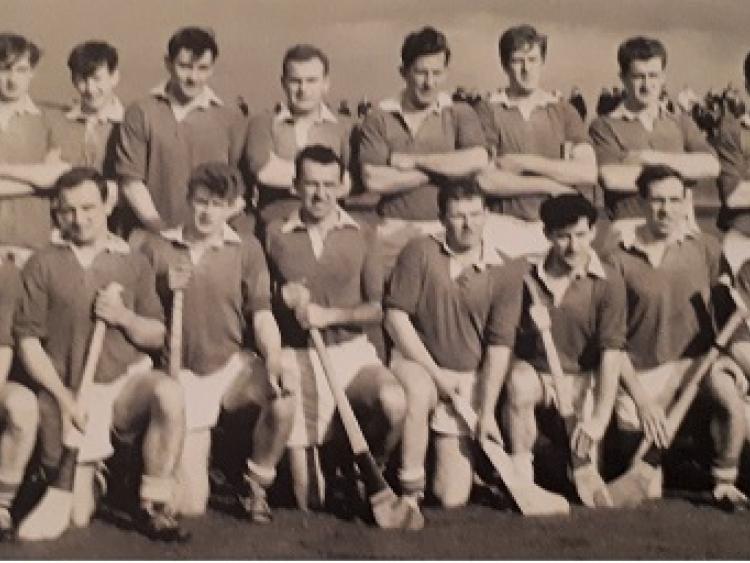 Roscrea is one of seven clubs to have three county senior hurling titles in a row in Tipperary.

In Tipperary, winning a county senior hurling title is a difficult thing. Competition is so stiff and there are so many potential banana skins that any slip-up can prove fatal.

Granted the round robin and backdoor systems which have been introduced at various times mean that the stronger teams can afford to have an off-day on some occasions. But, by and large, a defeat can have a major impact on the psyche of a team and can throw them out of kilter totally during the course of a championship.

So, if winning a championship is hard, retaining it is even harder. And, doing the treble even more difficult again. In fact, the number of clubs which have managed to win three county titles in succession in Tipperary remains quite low at seven, although some of them have achieved the feat on more than one occasion. 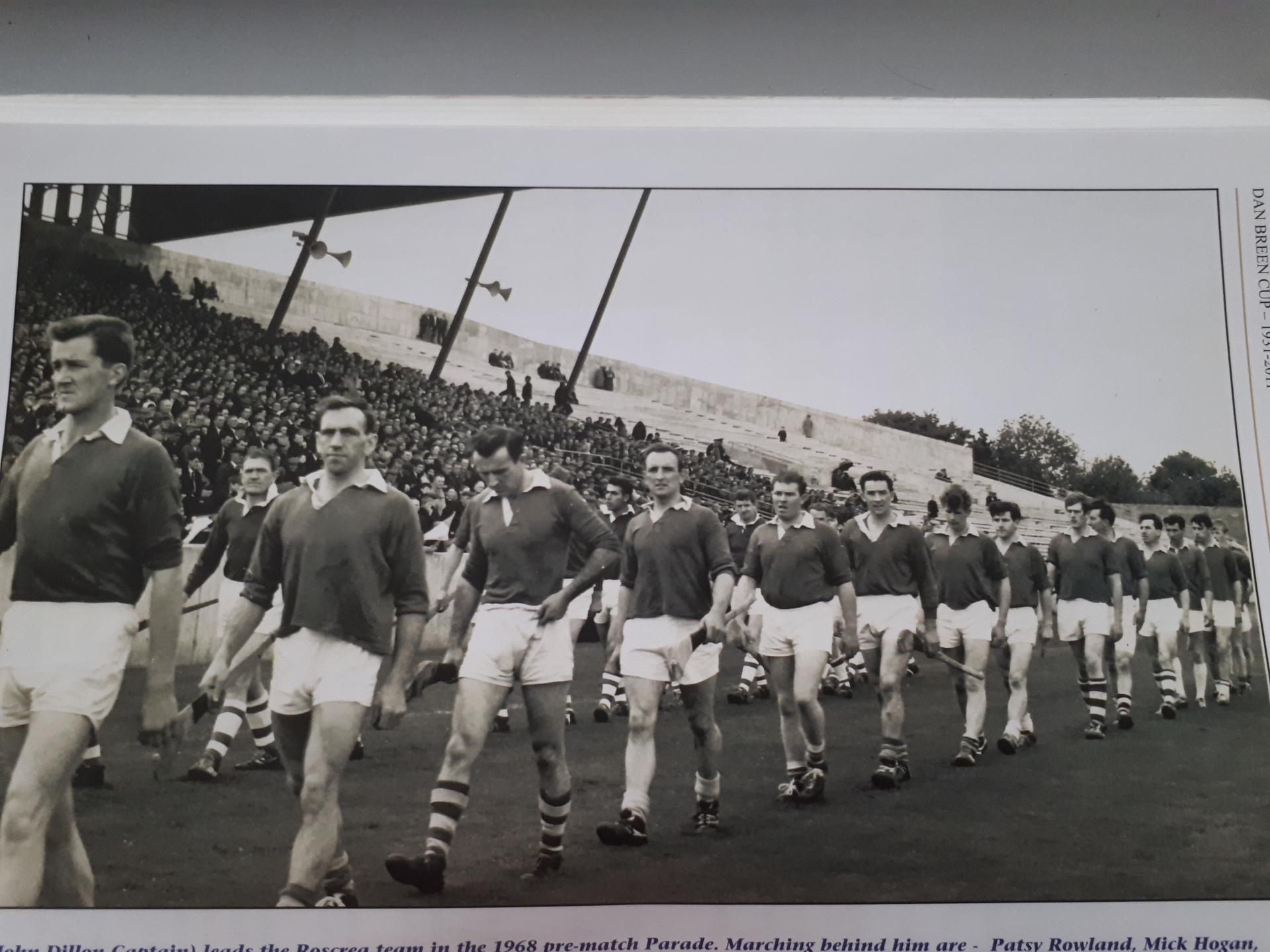 So, winning three-in-a-row is exactly what Roscrea did, and this year they celebrate the Golden Jubilee of that achievement with the third of their successes coming in 1970 when they defeated Thurles Sarsfields by 3-11 to 2-12 in front of 10,000 people with Patsy Rowland lifting the Dan Breen Cup.

What is even more remarkable is that the victory over Sarsfields again, in ’68, was a first ever county title for Roscrea – they won that game by 2-13 to 3-4 as Sarsfields sought their 28th crown. But, Roscrea were a coming force and they would be around for a long time. In fact they would win six county senior hurling titles between in 1968 and 1980, but they also lost eight finals between 1963 and 1985. Remarkably, the great Francis Loughnane played in all fourteen of those finals and was one of their main driving forces, as well as being one of Tipperary’s finest hurlers during the era.

What’s also remarkable, is that in the ’67 final against Carrick Davis, Roscrea goalkeeper Martin Loughnane was aged 50 and had played in the previous finals of 1954, 1945 and 1936 – a 31 year career in the red jersey which did not yield a county senior title. Tadhg Murphy took over in goals in ’68 and Roscrea were to win their first crown.

Roscrea had very successful minor teams in the early sixties and they were to win a remarkable four county titles between the years 1960-1963. What a platform this run of success provided for the north men in years to come and they made the most of it with the passing of time. They had also won u-14 and u-16 county finals and it quite clear from early that a team of real quality was on the way up. The question was, could they develop into something special? The answer, was yes, but it took time, as it always does. And, with the north championship a real hotbed of activity, it took a lot of hurling to get out into the county championship in the first place. Experience had to be gained and if it took a lot of heartbreak to gain that experience, it stood them in good stead when they eventually came to making the breakthrough.

Roscrea had also won two county u-21 titles proving that the club was building on it’s earlier minor successes. It doesn’t always happen that underage and minor success means major victories at u-21 and senior level, but in Roscrea’s case, they ensured that this would be the tale as they managed to bring the players along with them and progress them to being one of the most potent teams in the land.

Roscrea won the north final in 1963 but they lost out to Sarsfields in the county final by 4-10 to 2-10. On the morning of that final held in Nenagh on October 27th, the mother of Roscrea defender Owen Killoran passed away and the event had a profound effect on the team, who had lost the services of the stylish wing back as a result.

Roscrea also lost the ’67 final to Carrick Davins by 2-10 to 2-7, but they were building all the time and when they came to face Sarsfields in the final of ’68, at last the Roscrea men were to claim their first ever title on October 13th in Thurles when a crowd of 10,000 saw them victorious by 2-13 to 3-4.

Sarsfields were looking for their 28th title, but in winning their first, Roscrea showed greater speed and dash – at last the minor and u-21 success had paid off with the ultimate prize secured.
Francis Loughnane had the first score of the game and he was to bag 0-7 en-route to victory with the goals being scored by Joe Tynan and Harry Loughnane. Led by captain John Dillon, Roscrea celebrated wildly and who could blame them.
Retained Crown

The three-in-a-row was completed in 1970 against Sarsfields again by 3-11 to 2-12 in a game which really tested their mettle and confirmed for everyone that they were the undisputed kings of Tipperary hurling at the time.
Sarsfields fought back from an 11-point deficit in the last quarter to come within two points of the champions, but Roscrea showed all their wily gained in previous seasons to stave off the onslaught and to emerge by the skin of their teeth.
Jackie Hannon had a goal for them eight minutes into the second half and it looked as though Roscrea were on their way to victory – the score had been 2-8 to 0-4 at the break in favour of the north men.

Sarsfields though, buoyed by a Sean McLoughlin goal, fought back and the last five minutes of the game was tension filled with a Jimmy Doyle last gasp free whizzing over the bar – a goal would have levelled the game.
But, Roscrea held firm with Tipp colleagues Carey and McLoughlin having many a battle at the edge of the Roscrea square and other prominent Tipp men Jimmy Doyle, Paul Byrne and Paddy Doyle excelling for Thurles, while Tadhg O’Connor, Mick Minogue and Joe Tynan did likewise for Roscrea as captain Patsy Rowland lifted the Dan Breen Cup.

The three-in-a-row had been completed and Roscrea had carved out a unique piece of history for themselves. They would go on to win the Dan Breen Cup again in 1972 against Borris-Ileigh by 5-8 to 3-6; 1973 against north rivals Kilruane MacDonagh by 3-14 to 3-8; and 1980 against the same opposition by 3-11 to 2-13 when Francis Loughnane excelled scoring 1-7 in the victory. 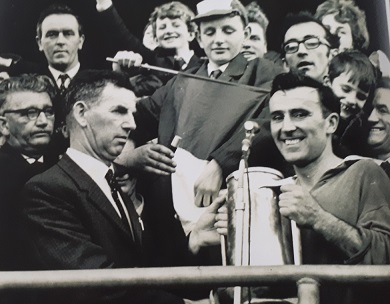 The Roscrea club, which actually hosted four All-Ireland semi finals in 1934, 1936, 1939 and 1941 with Galway contesting and losing all four, describes how it’s history is “shrouded in colour, controversy, hard luck stories, and everlasting glory. That it took until a glorious Sunday in October 1968 for a club of such immense talent, tradition and popularity to win its first ever county championship, is one that still raises questions, argument and debate in the traditional GAA watering holes around the old monastic town.

“Before ’68 some blamed our lack of senior county honours on the famous nine-year curse. In the period from 1936 to 1963 Roscrea contested four county finals and lost all four. What was interesting however was the nine-year sequence, which was a pattern only too evident in those heartbreaking defeats.

“The first was lost in 1936, the second in 1945, the third in 1954 and the fourth in 1963. However that momentous Sunday on October 13th 1968 which signalled the beginning of a golden era in the history of the club, changed the fortunes of the brave and banished forever the nemesis that was the nine-year curse.”
However 1971 did throw up one of the most famous, memorable and looking back on it now, one of the most honourable occasions in the club’s long and illustrious history.
On a biting cold December’s day 15 famous warriors took to a wind swept St Brendan’s Park Birr, to ensure that no matter what the future holds for Roscrea GAA Club the name and tradition of Roscrea hurling will be forever immortalised in the annals of GAA history and folklore.

For it was on this day that Roscrea became the first All-Ireland club champions, made all the sweeter for the town by beating St Rynagh’s, the 1970 county champions from Offaly by 4-5 to 2-5.
“One would have to be an inhabitant of the town to understand to bitter sweet rivalry that exists between the two cultures of Tipperary and Offaly that make up the bulk of Roscrea’s population, and hence, a win or loss for either tradition whether it be at club or county level is greeted with the greatest acclaim and applause possible,” the club website claims.

Due to fixture congestion the club final wasn’t played until the week before Christmas, a full year after the competition began. In the intervening period both Roscrea and St Rynagh’s had lost their respective county championship titles.
The match saw a number of inter-county stars shine including Tadhg O’Connor, Kieran Carey and Francis Loughnane while St Rynagh’s called on Offaly starts such as Damien Martin, PJ Whelehan and Paudge Mulhaire.
The match was played in deplorable conditions, but in spite of this, both sides played excellent hurling. The Tipperary champions, Roscrea, were at their brilliant best and had an interval lead of 2–4 to 0–1. St Rynagh’s had a very slow start and were held scoreless against the wind for 29 minutes.

An early goal by Barney Moylan held out prospects of a St Rynagh’s comeback early in the second half, however, a solo-run goal by Joe Tynan produced a goal that put Roscrea back in command. Roscrea were regarded as the fitter side.
Roscrea’s half-back line came in for praise in nullifying the St Rynagh’s attack.
It was a glorious occasion for Roscrea -a crown of which they are hugely proud, an achievement claimed in the trenches alongside neighbours and friends.