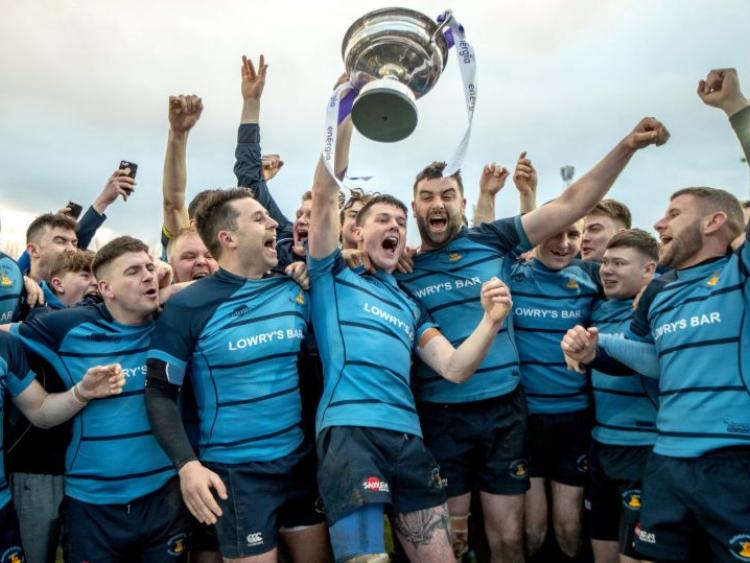 Celebrating with the silverware - Kilfeacle and District

This team has created history by winning the league title for only the second time in their history and, just for good measure, taking the All Ireland Junior Cup as well.

Buoyed by their magnificent Energia All-Ireland Junior Cup final triumph over Dromore RFC at Coolmine RFC in January, Kilfeacle & District went in search of an amazing double and had the elusive Munster Junior Rugby Division 1 title in their sights.

As the season progressed it seemed like no team could stop Kilfeacle and District on their inexorable march to glory as they swept aside all comers on the pitch. After Kilfeacle’s bonus point win, in their penultimate league game against Clonakilty on Sunday March 8 it was all but a foregone conclusion, as technically, all they would have to do was to fulfil their final fixture on the following week away to Richmond to be crowned champions.

Kilfeacle braced themselves for a historic occasion as messages of congratulations from far and wide flooded in. All Kilfeacle and District RFC had to do was show up for the final game and fulfill the fixture. One little technicality stood between them and their Holy Grail, what could possibly go wrong in the next week!

However, that week there was a turn of events that was unprecedented and one we are still being impacted by to this day. Nobody could have foreseen the impact that COVID 19 would have on every facet of life on a global scale. Nobody could have foreseen that it would take until Thursday June the 4 before Kilfeacle would finally and justifiably be officially declared Munster Junior Rugby Division 1 Champions. 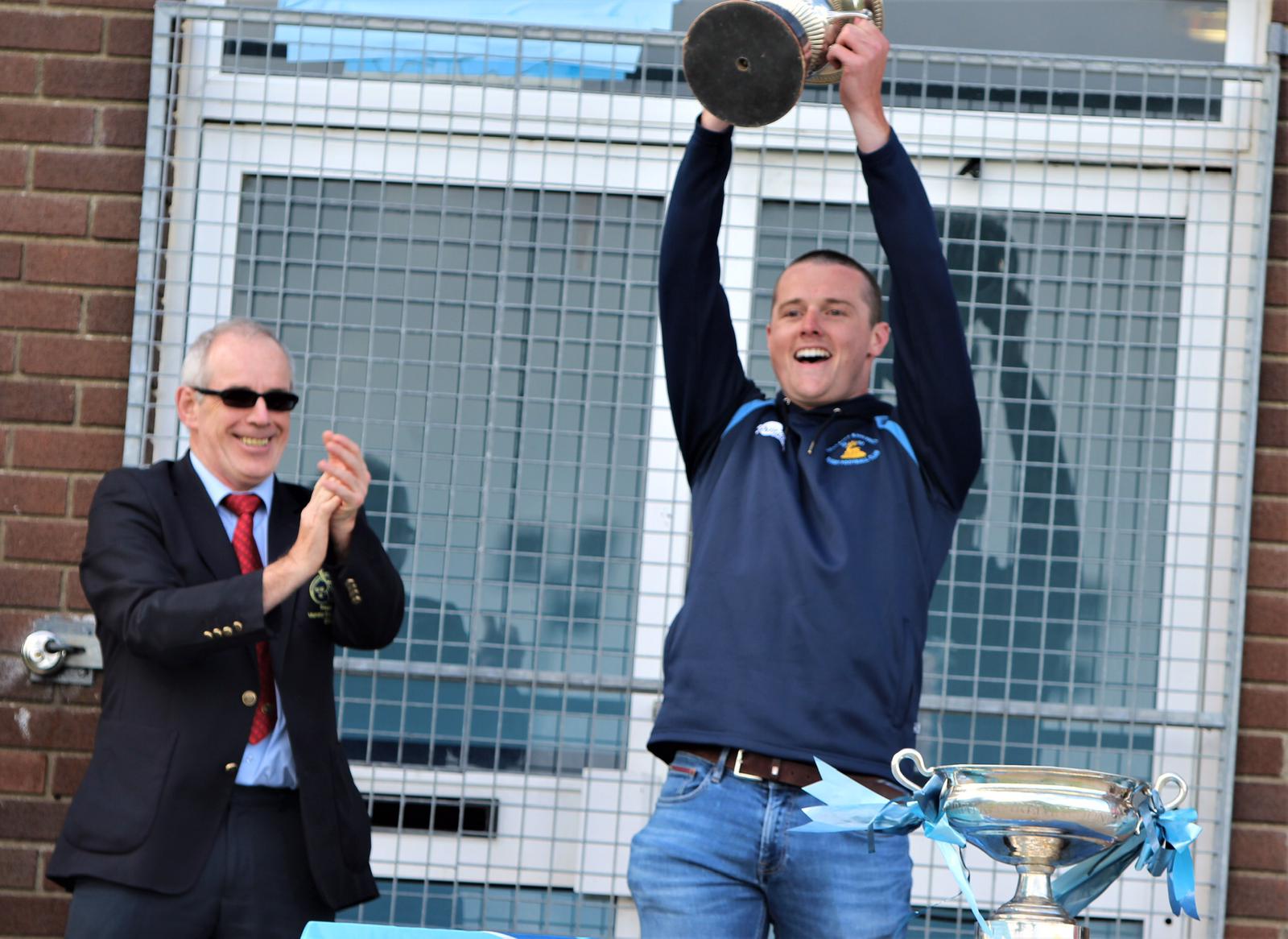 During the week before the shutdown, when it became obvious that all sport could be one of the first casualties of social distancing to restrict the spread of the COVID 19 virus, Kilfeacle and District RFC and Richmond RFC tried their best to fulfil the fixture but to no avail. The technicality suddenly came into play and even though all the clubs in the first division agreed that Kilfeacle and District and won the league the unthinkable was now a possibility!

This team has created history by winning the league title for only the second time in their history and, just for good measure, taking the All Ireland Junior Cup as well. It was an unbelievable achievement to win both trophies as they had to thwart the challenge of much bigger and more prestigious clubs. They won the All Ireland Junior Cup by beating the four-in-a-row seeking champions along the way. Kilfeacle and District have achieved some amazing feats before, in its short history and this season is now up there ranked amongst the best.

This year’s achievements haven’t happened by accident and came with high price tag for players such as Conor O’Sullivan, Cormac O’Donoghue, Michael Slattery and Shane Luby who all were long-term absentees with serious long-term injuries. These players may not have been able to continue their quest on the pitch but their contribution off the pitch was immeasurable.

The presence of so many local players within the first team squad showed that the raw material was there for a successful team. All the squad are within 10 or 15 kilometres of the club. They’ve all played underage up along and everyone has family ties to the club. Player / coach called himself the only blow-in, even though his family are steeped in Kilfeacle. All the lads started from underage and we’ve still got good young lads coming up through the underage as well. It’s a great platform for everyone in Kilfeacle to see that the senior team are doing well, keep bringing through three or four Under-18s every single year, and it has proved dividends this year with lads coming through.

Kilfeacle and District won the Munster Challenge Cup in 2017 but before that, it was a pretty dry spell. We’ve been competing a lot every single year, but to get a trophy meant an awful lot. Winning two competitions of this magnitude has been greeted with undiluted delight by young and old in Kilfeacle. The current bunch of players, have been with each other a while they give the hunger and the thirst to young players coming through.

This year has meant so much to the club, even the older heads in the committee, the Kilfeacle stalwarts that are there, it has meant so much on every level to win these trophies. The more you look back on it, you always count the trophies you’ve won.
These trophies don’t just belong to the players they belong to everyone from volunteers through parents, coaches, selectors, patrons and supporters. Special mention must go to all our coaches for their tireless, selfless work in developing the youngsters and the talent that permeates through the different teams that wear the Blue for the Little Club on the Hill. Everyone associated with Kilfeacle from Chairperson to tea lady, from first team captain to under six substitute are loyal supporters of Kilfeacle & District RFC and would follow them to the ends of the earth and even further to support the ‘Boys in Blue’. We are still a small club but in many ways that is our greatest asset. We are a community-based club and a tightly knit family. It is this sense of family and community, sense of belonging, sense of being an integral part of something, sense of loyalty that has kept this club in existence in the past and hopefully in the future. The enormity of these achievements are magnified when you take into consideration the players that make up the squad and their links to the club. Many are following in the footsteps of brothers, cousins, uncles and fathers by pulling on the navy and sky blue colours of Kilfeacle. Some are sons and grandsons of the club’s founding members. Many have family members actively working in the club. The large amount of people that travelled to cheer this squad on were not just supporters. They were family members, partners, friends and loved ones.

These supporters along with the players would be first to recognise the coaches and back room staff who have been crucial to all the achievements and successes. Behind the scenes is the tirelessly working committee and club members. This truly is a complete club achievement.

During these troubled times the one realisation that the club as a whole and this group of players in particular have realised is that winning this competition is an amazing achievement but pales in significance when compared to all the joy and pride they have provided and continue to provide every time they wear the navy and sky blue of the family of Kilfeacle and District RFC. In this COVID 19 environment and now more than ever, family means everything.