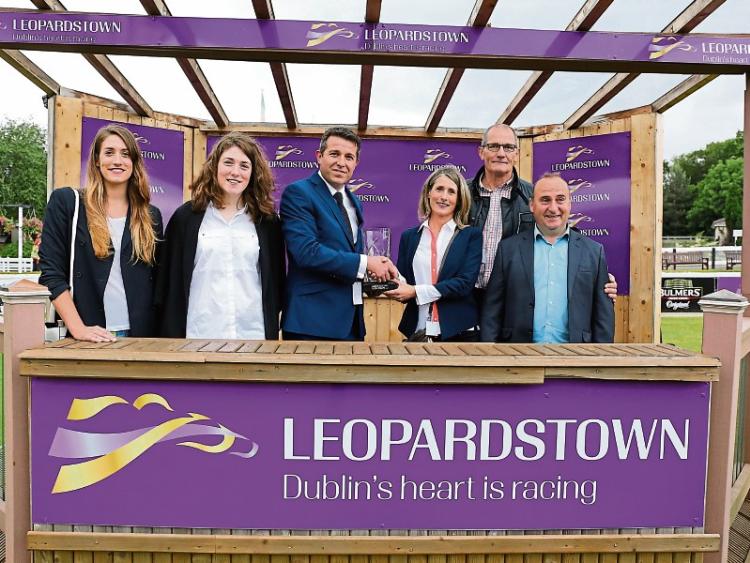 A GREAT DAY FOR THE DELPHI SIX SYNDICATE. Presentation by Dermot Grimes to John Hayes after Creggs Pipes won "The REA Grimes Fillies Maiden" at Leopardstown in June 2015.

Tipperary Town man John Hayes has enjoyed some horseracing success with his family syndicate ‘Delphi Six Syndicate’ especially with their horse Creggs Pipes. John’s love of horses is surpassed only by his love of music. However the only thing that sounds sweeter than that is Tipperary beating Kilkenny in an All-Ireland final or ultimately celebrating a winner in the company of his family...

What sparked your love of racing?

Winning a maiden in Leopardstown in 2015 with a filly I bred called Creggs Pipes. My first love is music and my second love is breeding thoroughbreds.

How long have you been involved in racehorse ownership?

Who is involved in this syndicate with you?

My wife Una and children Sile, Mary, Tom, and Alice.

Have your colours/racing silks any significance?

No, just a random choice by myself!!!! They were made in a rush when Creggs Pipes was entered for her first race and the colours were needed in a few days. Kathleen Kennedy on the Curragh turned them around for us really quickly.

How did you come up with the name for your syndicate?

How did you decide on the horse’s name?

I play piano or double bass in a trad band and Silver Spear is a beautiful traditional Irish reel. Creggs Pipes, suggested by my wife Una, is also a trad Irish reel which I was learning on the fiddle without great success. I name all my horses after Irish reels.

What has been the best horse you have been involved in?

Creggs Pipes, a miler whom I bred and raced. She won the Colm Quinn BMW Mile Handicap Galway Mile at the 2016 Galway Festival and the Group 2 Lanwades Stud Stakes at the Curragh in 2017.

What is your most memorable racing moment?

Who is your favourite horse of all time?

Use one word to describe watching your horse pass the line in front?

I have three words - Thank you Sophie! The dam of Silver Spear and Creggs Pipes.

Where is your favourite place to celebrate a winner?

Anywhere with my family.

If you could have one famous person own the horse with you who would it be?

Martin Hayes my favourite fiddler. He might compose a reel inspired by the horse.

Have you or the syndicate any race day superstitions?

What trait do you look for in a trainer?

Outside of racing, what is your favourite sporting moment?

What is your guilty pleasure?

A few pints and robust conversation on a Friday evening at 5.30pm with a group of my soul mates.

How are you occupying your time during the Covid-19 restrictions?

Working from home – it is business as usual for Hayes Higgins Partnership. I am also building a horse walker on my own which I have been at for the last two years!

What racing festival are you most looking forward to attending when the restrictions are lifted?