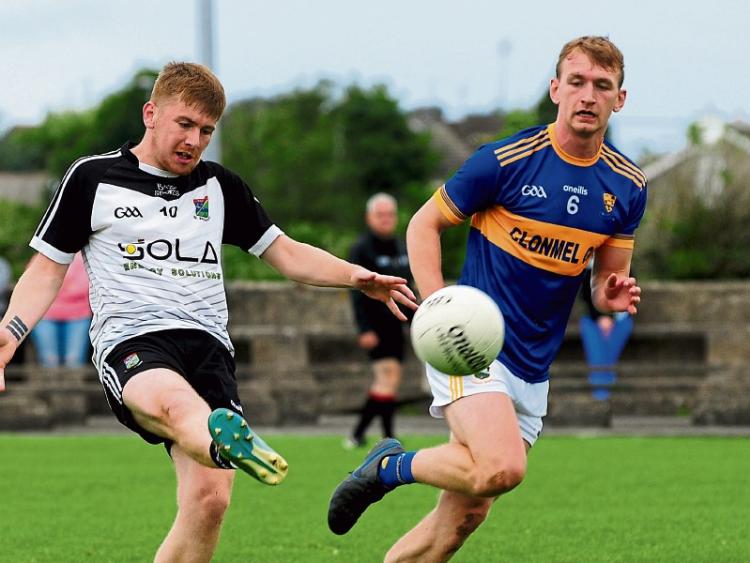 Tight margins were the order of the day between Kilsheelan/Kilcash and JK Brackens in the county senior football championship game played on Sunday last in Cashel.

The lead for either team never extended to more than a few points, as the sides were level on six occasions over the hour.

JK Brackens had the advantage of a strong breeze in the first half but Kilsheelan/Kilcash made light of that advantage in the first quarter and led by two points at the water break.

Brackens came more into it in the second quarter and scoring four points to Kilsheelan/Kilcash’s one they led by 0-7 to 0-6 at half time.

Evan Comerford opened the scoring for Kilsheelan/ Kilcash after three minutes with a point from a free but this was quickly followed by a JK Brackens attack that yielded a point by Shane Doyle.

Kilsheelan were exerting a lot of pressure on the JK Brackens defence and were rewarded with points by Mark Kehoe and Mark Stokes.

Shane Doyle, operating at full forward for Brackens, was causing some difficulty for the Kilsheelan/Kilcash defence and everytime he got possession there was a chance of a score. He tapped over two points to lift his side but Brendan Martin, a constant threat for Kilsheelan, kicked over two points on the trot to leave just two between the sides at the water break.

The game continued in the same pattern in the second quarter, with Kilsheelan scoring immediately after the restart with an Evan Comerford point from a free.

Brackens then began to take control and running at the Kilsheelan defence they broke through for a point from centrefield player Lorcan Roche.

In a rare attack in the second quarter Brendan Martin had a goal chance when his first-time shot off the ground brought a great save from the Brackens goalie Kuba Beban.

Brackens continued to dominate and two points from Shane Doyle and a point from a free by Dean Mc Enroe put them into a one point lead at half-time, 0-7 to 0-6.

The second half was a succession of wides and missed chances by both sides; Brackens particularly will rue the chances missed, especially  from frees.

Kilsheelan levelled the game one minute after the restart and this was followed by three wides from scoreable positions by Brackens. Brendan Martin put his side ahead ten minutes into the half, only for Shane Doyle to level again for Brackens.

Mark Kehoe stepped up to the plate for Kilsheelan  with a fine point but the leveller came again when Brackens were awarded a close-in free that Dean Mc Enroe pointed.

Kilsheelan introduced a number of subs at this stage to try to bring new energy to their game and the policy seemed to pay off, as Paul Maher sent over a fine point.

When Evan Comerford pointed a close-range free shortly after it looked like the victory was going south but Brackens were not to be outdone.

They did not drop their heads and realising at a late stage that they had an excellent freetaker in goalie Kuba Baben, he became the hero of the hour for them, first from a 45 and from another free 40 yards out he put the ball straight over the bar to secure a draw for his side just on the final whistle.

A draw was probably the fairest result when one considers the chances missed on both sides.