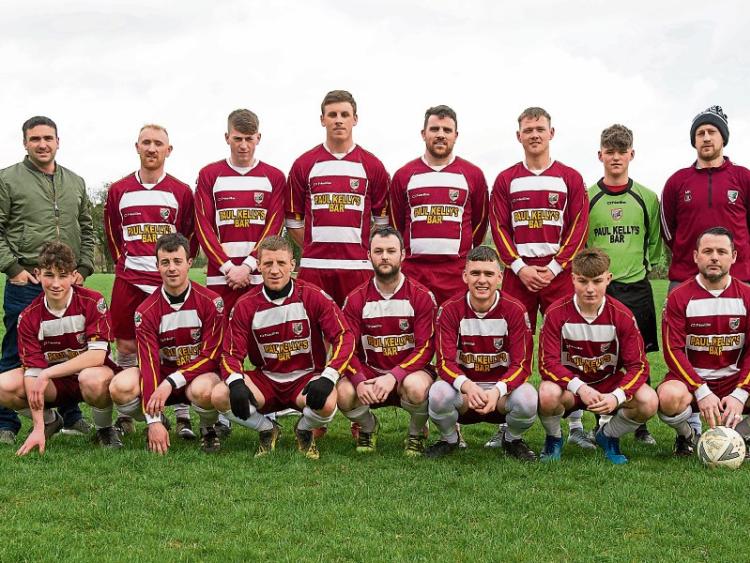 With both sides finishing on 28 points it took a winner- takes-all play off to decide who would emerge from this year’s Division Two as champions and that was decided after a penalty shoot out in a cold, wet Celtic Park in Bansha on Friday night.

Cullen started the better and thought they had grabbed the lead in the fifth minute when Tony O’Neill was played into a one-on-one situation with the Park ‘keeper, but the net minder made an excellent save to keep the game level. Minutes later at the other end a mix-up in the Cullen defence gave  Cahir a chance but Willie Dunne was unable to get a clean shot off and the defence cleared.

But it was only a momentary respite and in the 20th minute Cahir hit the front when Paddy “Wack” O’ Donnell was played in from the left and his shot took a deflection and flew past the Cullen keeper to nestle in the net.

O’Neill had another good chance to level the game again just after the half-hour mark but he saw his shot skim the crossbar and the Park took their slender lead to the break. Tony O’Neill was proving to be a constant threat and just after the restart he forced another great save from the Cahir ‘keeper after he had blocked down an attempted clearance from defence.

But in the 68th minute, Cullen finally got the reward their efforts deserved when a Diarmuid Looby strike from all of 25 yards out sailed into the top corner to put his side back in the game at 1-1.

They  were the better of the two sides from there on in, piling on the pressure but they could not add that little bit of quality to get a second goal.

For Cahir, a brace of free-kicks from O’Donnell went close, but the game finished like the league table at honours even. As befitted a game with so much on the line, extra-time was a nervy affair, with both sides starting to run out of steam and ideas, so it took the almost inevitable penalty shoot out to decide the destination of the title.

And in the shootout, Cullen’s hero turned out to be the youngest player on the pitch, 17 year-old ‘keeper Josh Moloney who saved three of the Cahir attempts and set up Timmy Heffernan, the west Tipperary side’s captain, to take the seventh and decisive penalty that won the game on a five goals to four scoreline.