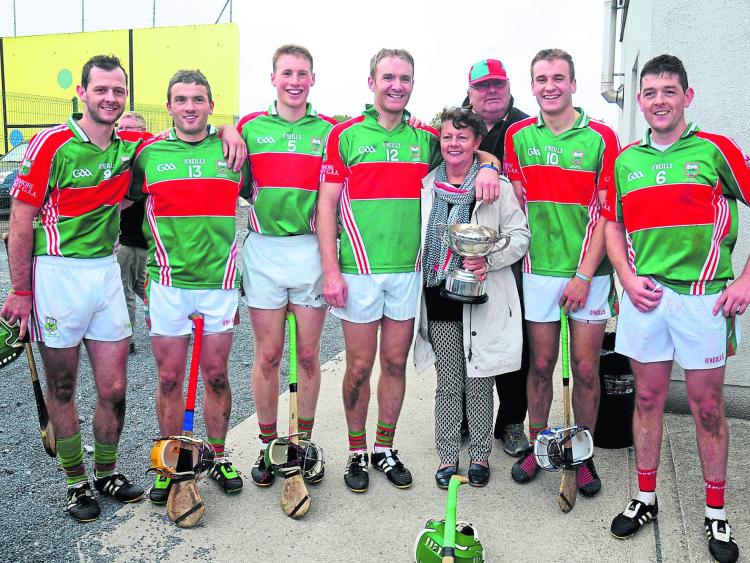 Late extra time victory came in the most dramatic of circumstances

Despite conceding three first half goals and hitting a total of 17 wides in this afternoons FBD Insurance Tipperary county senior hurling championship final, Kildangan were crowned champions following the most dramatic finale in this pulsating game of hurling when corner forward Bryan McLoughney blasted a goal two minutes into injury time of extra time, to break Loughmore Castleiney hearts.

A game for the ages, and one which will certainly be remembered, not just for the strange circumstances, but also for the magnificent spectacle it was on a brilliantly sunny day, the Kildangan lads were ecstatic after the final whistle and who could blame them. Because, not only was this their first ever title - it was their third final in three years - it also did not look likely that they would be victors with 22 minutes played as they had conceded three goals to a rampant Loughmore Castleiney team.

Those goals from Evan Sweeney (5th minute), Tomas McGrath (20th minute) and John McGrath (22nd minute) gave Loughmore Castleiney a 3-3- to 0-7 lead. However, five of the last six points of the half were plundered by Kildangan  with Paul Flynn, Sean Hayes and Billy Seymour being their key men.

Extra time then saw the mid men lead at the break with scores from John McGrath (2) and Liam Treacy, against Andy Loughnane  and Paul Flynn scores for Kildangan. And, Loughmore looked to have the edge when Tommy Maher put them ahead in injury time, only to see Bryan McLoughney level again. Then John McGrath pointed a 65 metre free for the lead once more and it looked as though that would be that. But, the ball was pucked out, the play developed and Bryan McLoughney got onto a last gasp effort to blast the ball to the Loughmore net for the winning score.

It was a dramatic finale - a magnificent way to win any county title, never mind a first. But, a horrible way to lose for the most unfortunate Loughmore Castleiney men, who will be back in Semple Stadium on Sunday next to try and make amends by winning the football title at the hands of holders Clonmel Commercials.

Kildangan are champions then and they will rightly celebrate a success which has been a long time in the making.

Congratulations to them on making history.