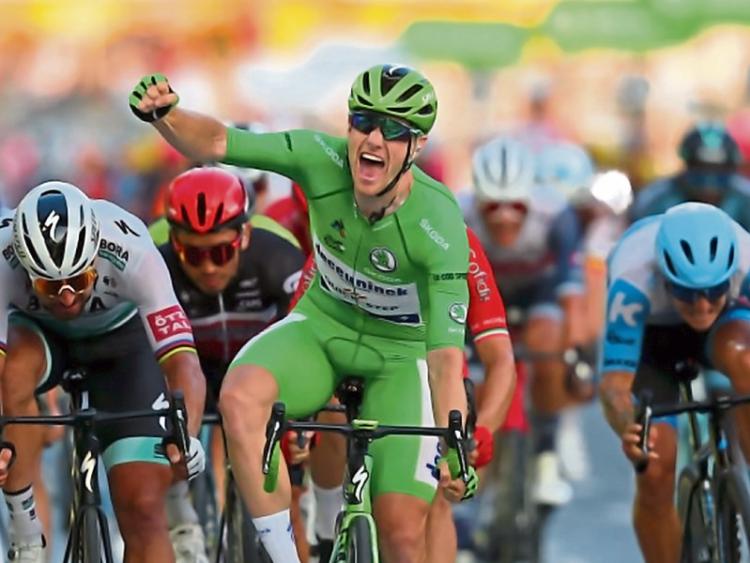 His success in the points classification of the Tour de France will give Sam Bennett the confidence to become a more consistent cyclist, according to the last Irish rider to secure the tour’s green jersey.

“This will really give him the confidence to go on and win classics such as Milan- San Remo or the world championship, if the circuit is right for him”, says Bennett’s fellow Carrick-on-Suir man and cycling legend Sean Kelly.

Tweeting after his glorious victory in the final stage on the Champs Élysées in Paris, Sam Bennett said that his success was “a dream come true”, adding that he couldn’t thank his Belgian team Deceuninck–Quick-Step enough.

After he had made the breakthrough by winning his first stage earlier this month, he thanked everyone that had been involved for giving him the opportunity to get there.

“I want to thank my wife (Tara), everyone around me. You dream of it, you never think it’ll happen”.

Winning the green jersey was described by Sean Kelly as “the icing on the cake” for Sam Bennett, after such a great tour.

“It was clear he had to get out of the Bora-Hansgrohe team to go to the Tour de France, which he needed.

“He should have been there for the last two years but at least he got there this year and did the business”, said Kelly.

He said that Ireland had enjoyed success in the tour, with Dan Martin winning stages, but to win the green jersey was “a major one”.

Sam Bennett sealed the title in some style, claiming his second stage win in the race finale on the Champs-Élysées. In doing so he pipped the Slovak rider Peter Sagan, the winner of seven green jerseys in the past eight years and his former Bora-Hansgrohe team mate.

Sean Kelly, the last Irish rider to win the points classification in the Tour de France (in 1989), said the green jersey was only behind the yellow jersey awarded to the race leader and overall winner.

“It’s of huge importance to the rider and the team”, he stated.

“With his new team and the form he was in, this was the year for Sam. Pretty much every day you have to be taking points in the intermediate sprints. That was a big ask for him but he managed it very well.

“He was put under pressure big-time by Sagan in the second week. But his confidence was growing and you could see he was winning the battle.

“It was great to see a guy from Ireland winning and the fact he’s from Carrick is better again”, said Kelly, who was pleased that Bennett had bounced back so strongly from his injury problems.