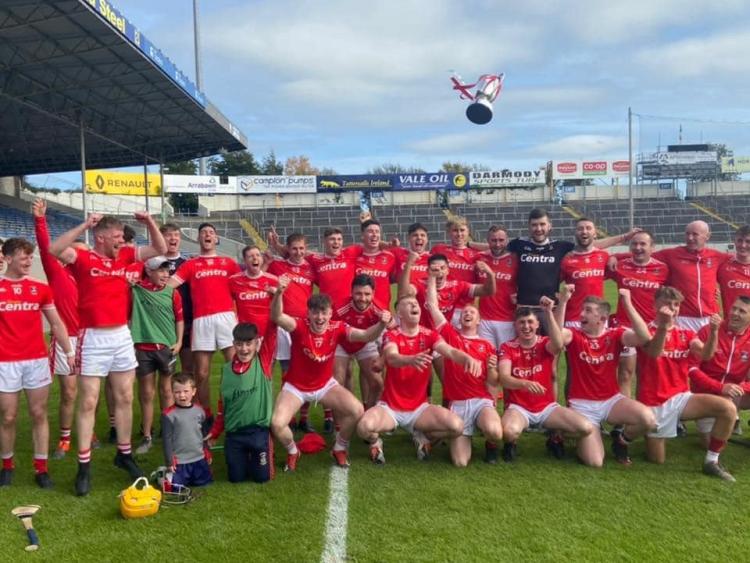 Moyne-Templetuohy 0-19
A massive day in the history of Gortnahoe Glengoole club unfolded on Sunday afternoon last at Semple Stadium as they bridged a thirty two year gap to win the FBD Insurance county intermediate hurling final with a two goal victory over near neighbours and great rivals Moyne Templetuohy.
It was a win made all the sweeter by virtue of the fact that Moyne-Templetuohy were most people’s fancy to lift the Jacksie Ryan Cup as they had done in 2014, and the “icing on the cake” for Gortnahoe-Glengoole is that this success qualifies them for the O Riain Cup county senior hurling championship next year.
The new champions may have been outsiders going into the game but no one can say they did not deserve to triumph. All through they had a greater edge to their game and when it mattered most they finished with a flourish, outscoring their rivals 1-5 to 0-2 in a hectic closing ten minutes.
Moyne Templetuohy disappointment was obvious and understandable, particularly in view of the fact that they did not play to anything like their best. Despite that, they were still right in the game with ten minutes to go but in those closing minutes as Gortnahoe were in full flight, Moyne were left to rue some wasted chances, finishing with a total of sixteen wides, ten in the first half, compared to Gortnahoe’s eleven.
While Gortnahoe Glengoole savour a very special occasion for them they will be toasting corner forward Keane Hayes whose scoring feats all through the campaign were so important to them. Good as he had been all through, he reserved his best for the big occasion contributing a whopping 1-14 of their tally, 1-4 of that from play. His goal, three minutes into injury time, sealed the win for his side and crowned a hugely impressive individual performance.
With a liberal sprinkling of players who have worn the county jersey at various levels, Moyne-Templetuohy went into the final with an unblemished record, winning all their five games en route and were tipped to repeat their last success at this level in 2014. It was apparent however, from an early stage that Gornhaoe Glengoole were showing more hunger for the fray and they forged a 0-6 to 0-3 lead by the water break, with both sides guilty of some slack shooting.
Though Gortnahoe had the first score on resuming, Moyne Templetuohy then hit a productive spell picking off four points without reply through Gearoid O Connor(3) and Diarmuid Fogarty. Just when things were getting a bit ropey for them Keane Hayes stepped up to steady the Gortnahoe ship with three points before half-time to give them a 0-10 to 0-8 advantage at the break.
Gortnahoe Glengoole had a slight breeze behind them in the first half but Moyne Templtuohy re-opened with all guns blazing, a brace of points from half-time sub Jason Bergin, and another from Gearoid O Connor nudging them ahead inside four minutes. Gornahoe were not giving up by any means and struck a decisive blow in the 42nd minute when, with the sides tied at 0-13 each, Kevin Slattery finished a slick four man move with a cracking goal to which Keane Hayes added a point for a 1-14 to 0-13 lead at the second water break.
The lead could have been greater but for a great save by Paul Maher in the Moyne goal off a Ronan Teehan effort but the momentum now lay with Gortnahoe entering the final phase. Now it was Moyne’s turn to show their mettle, points from O Connor(2) and Tom Meade had them breathing down Gortnahoe Glengoole necks but once more Keane Hayes steadied the ship for Gortnahoe with three points to Tomas Hamill’s effort for Moyne.
There was great intensity in those closing minutes as Moyne chased a levelling goal and Gortnahoe hung on grimly. Niall Russell had a goal chance for Moyne but his effort was closed down and a goal still separated the teams as the game drifted into injury time with a new referee in charge as Kieran Delaney was sidelined with what looked like a calf injury and was replaced by linesman Peter Carroll of Burgess.
Moyne were throwing everything into attack and Gortnahoe had their backs to the wall but in a break Keane Hayes was left unattended by the Moyne defence, and he raced through for the clinching second goal in the 63rd minute.
Gornahoe fans in the limited gathering gave their men a rousing reception at the final whistle and how richly they deserved it. They have been knocking on the door for some years but finally the break-through.