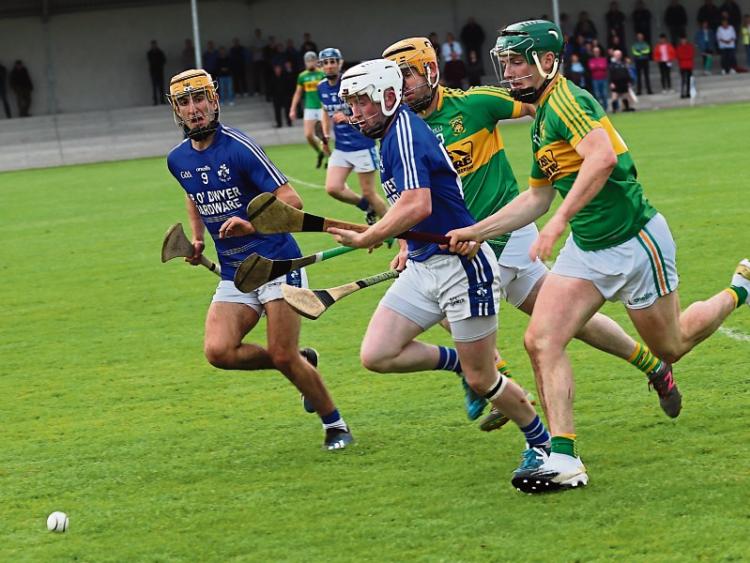 The first half had been a fairly even affair for the most part but Cathal Bourke’s well- taken goal just before half time was followed by a flurry of points from the defending champions, and this gave them a half-time cushion that they never looked like surrendering as the second half progressed.

While the game might not have had the knockout scenario of twelve months ago it was certainly an entertaining final.

It set a new record, becoming the highest scoring west final on record, which was previously held by the 2013 final between the same sides.

The early exchanges belonged to Eire Og. Aidan Griffin pointed from a placed ball and finished off a good Eire Og move to the net either side of a Cathal Bourke point, all inside the opening three minutes.

Kevin Fox, operating in the half forward line, was a threat going forward as he added Eire Og’s second point.

Clonoulty/Rossmore were coming far more into the game and creating a lot of space, especially with Timmy Hammersley ghosting out the field.

Points from Thomas Butler, Aidan White and Timmy Hammersley had Clonoulty three points to the good at the first water break, 0-8 to 1-2.

A goal from Donal O’Dwyer levelled the game for a fourth time in the 20th minute.

Following a ruck, Donal O’Dwyer emerged racing for goal, laying off to Tom Fox before receiving a pass back and hitting the sliothar low to the corner of Declan O’Dwyer’s net.

Clonoulty/Rossmore’s movement continued to cause problems, and with Timmy Hammersley on form from play and placed balls they went three points up. Points from Ronan O’Brien and Aidan Griffin (free) kept the minimum between the sides but it was as close as Eire Og would get.

The turning point of the game came just before half time. Thomas Butler caught Declan O’Dwyer’s puckout before laying off to Cathal Bourke and he sent an unstoppable shot past Jamie O’Dwyer.

The latter had earlier saved from Conor Hammersley but had no chance with Bourke’s effort.

While it looked as of the goal might be the difference at the break, Clonoulty/Rossmore had other ideas and added further points from Timmy Hammersley (2), Sean O’Connor and James Hammersley.

Aidan Griffin ended Eire Og’s drought with a pointed free before referee Fergal Horgan’s half-time whistle, with Clonoulty/Rossmore ahead at the break by 1-15 to 2-5.

Points from Thomas Butler and Timmy Hammersley (2) increased Clonoulty/Rossmore’s advantage on the resumption.

Josh Quinn made an impact on his introduction and added a point while Conor O’Brien pointed  a long- range free. A further Donal O’Dwyer point saw ten points between the sides at the water break, 1-22 to 2-9.

The substitutes continued to have an impact on both sides, with Jack Ryan opening his account while Cian Mooney goaled and Dinny Crosse pointed at the far side.

With nine points in it, Eire Og made something  of a comeback. Conor O’Brien saw his 21 yard free saved on the line but a minute later, when Donal O’Dwyer was fouled, Fergal Horgan signalled a penalty and  Tom Fox sent the sliothar past Declan O’Dwyer.

Cathal Bourke pointed but Eire Og continued to look for goals and were unlucky not to get in for another one.

When Donal O’Dwyer pointed a free as injury time approached there were six points between the sides, but Clonoulty/Rossmore added handsomely to the scoreboard to run out comfortable winners.

Clonoulty/Rossmore will be very happy with their performance, hitting 1-31, of which 1-26 came from play. The movement of their forwards caused problems for the Eire Og defence and they continually found space.

Their starting full forward line finished with 0-13, though Timmy Hammersley did drift further out the field on numerous occasions to win possession. Hammersley finished with 12 points, of which seven points came from play and he was instrumental in Clonoulty/Rossmore’s impressive  performance.

Their half forward line chipped in with 1-8, all from play, with five of their six forwards scoring.

Conor Hammersley and Michael Ryan W were well on top in midfield, with a lot of the ball going through Ryan in the second half. They finished with 0-6 from play.

Their defence was well on top, despite the concession of four goals, two of those coming late on. John O’Keeffe was solid at centre back, as was Sean O’Connor at wing back.

Eire Og started well but drifted out of the game, especially after the concession of the first goal when only four points behind and they went in at the break seven in arrears.

Their ability to get goals kept them in the game but it wasn’t enough, as Clonoulty/Rossmore’s scores came a lot easier. Conor O’Brien and Diarmuid Ryan worked very well in the full back line as did Paudi O’Dwyer at centre back.

Kevin Fox ran at the Clonoulty/Rossmore defence and caused problems. Tom Fox did well at centre forward while Donal O’Dwyer worked tirelessly and finished with 1-2. Their starting full forward line finished with 2-6 (2-2 from play).

Ronan O’Brien played well and got on a lot of ball. Their bench made a big impact with Dinny Crosse, Josh Quinn and Cian Mooney all scoring.