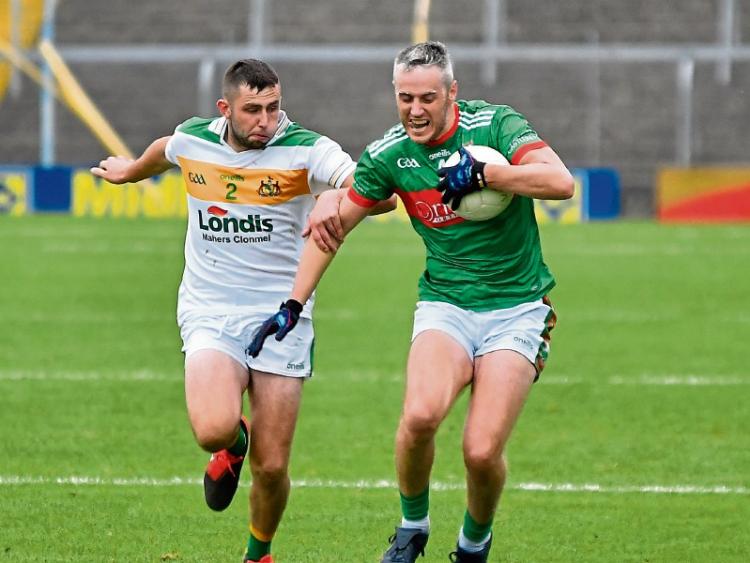 Loughmore’s Willie Eviston tries to hold off the challenge of Jamie Ahearne, Clonmel Commercials, in the county senior football final

“I think we’re getting there but it’s certainly not by domination,” he said following his team’s single-point victory over Loughmore/Castleiney in an exciting final at Semple Stadium on Sunday.

“Most counties will have three or four teams that are likely to get their name on the cup and at the minute that’s the situation here. We’ve been fortunate maybe to get our hands on the cup in three of the last four years.

“We always feel that the games we lost, to Moyle Rovers two years ago with the last kick of the game, a bit like today, and the one we lost to Loughmore in Boherlahan four years ago was the same thing, by a point.

“There’s no easy championship in Tipperary and the standard at the minute is what it should be.

“And it’s coming from the young players coming through. Look at the difference in Loughmore this year from last year - the two Conors (McGrath and Ryan) in the full forward line, and young Connolly have given them an impetus that they didn’t have before.

“They’re regenerating their team, which is what everybody has to do. They are a force that’s not going to go away. We are not going away and Moyle Rovers aren’t going to go away;  Kilsheelan and JK Brackens, none of those teams will go away because they have young players so I think that the standard is quite high at the minute.”

This year’s Covid-interrupted season means his team won’t have a chance to compete in the Munster championship, and Charlie McGeever said “we’d be well prepared to go onto the Munster championship because that’s as good a test... I think the test that Loughmore had against Moyle Rovers was a help to them. Whoever came out of that game was going to have a little bit of an advantage today.

“When the question was asked today we have to say at least we stood up and got over the line.