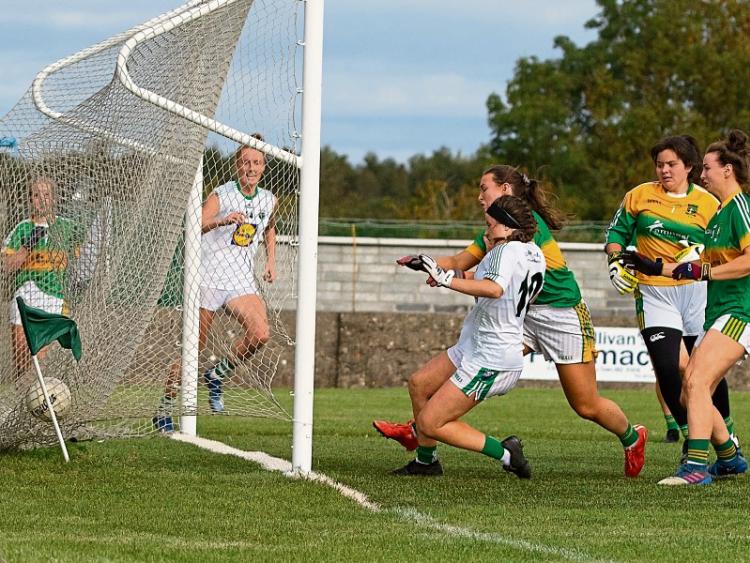 Cahir regained the ladies senior A county football championship title on Sunday last after a pulsating final against old foes Aherlow on an ideal afternoon for football at Sean Treacy Park in Tipperary.

Level after 60 minutes, Cahir produced a stunning performance in the first period of extra-time to pull away from last year’s champions. It was a devastating period of play from the south side in which they scored 2-6, with both goals coming from Roisin Howard.

Cahir now face Clare team Banner at 8pm this Friday in the Munster Club championship, with the venue to be confirmed.

Both teams deserve a huge amount of credit for serving up a superb final and on another day Aherlow may well have held on for victory. With 57 minutes played Anna Rose Kennedy fired over a beautiful point to edge her side in front, a lead they held three minutes into injury time.

But the hunting skills of Aisling McCarthy, a characteristic lauded by her Aussie Rules counterparts, saw her turn over possession in her own half and from there Cahir sprung their last attack to set up Roisin Howard for the equalising point.

Aherlow never seemed to recover from the setback and conceded 1-4 in extra time before they eventually cleared their heads.

Up until that stage it was end-to-end football between the two best teams in the county. Ciara McCarthy opened the scoring for Aherlow before Aoife Corcoran, Aisling McCarthy and Aishling Moloney responded to give Cahir a two-point advantage

With only 10 minutes on the clock it was already clear that this game would be a classic, as both sides went all out attack, and it was no surprise when Anna Rose Kennedy found the net to raise the game’s first green flag.

A long ball found Emma Morrissey in space and when her piledriver came back off the crossbar, Kennedy was on hand to find the bottom corner from close range.

Five further points from Morrissey and one each from Aisling Ryan and Maire Condon opened up a seven-point lead for Aherlow in a 15-minute spell in which Cahir’s only response came from Roisin Howard.

Cahir then received a lifeline when Aisling McCarthy saw her left-footed strike find the net after trading passes with Anne-Marie O’Gorman, but just a minute later Morrissey struck at the other end to bring her tally to 1-5.

In typical fashion Cahir came again and forced a sideline ball in the Aherlow half. Aisling McCarthy launched a high ball into the forward line and like so many times in the past, Aishling Moloney climbed highest to fist past Aherlow ‘keeper Emer McCarthy to score yet another goal.

The final score of the half again went Cahir’s way when Eileen Flannery pointed to reduce the deficit to three points at the halfway stage.

Cahir started the second half just like they finished the first and scored the next two scores. Howard was again on hand to curl over from close range but the more crucial score came from the penalty spot.

A driving run from Anne Marie O’Gorman was cut short illegally, according to referee Michael Duffy, and Aishling Moloney made no mistake from the resulting penalty to edge Cahir back in front.

Both sides traded scores approaching the last water break of the day and with 15 minutes remaining they couldn’t be separated, with the game tied at 2-11 to 3-8.

With so much at stake every score was going to be crucial now. Niamh Costigan pointed again for Cahir but her effort was matched by the ever-reliable Morrissey, who curled over another free.

With just three minutes remaining Morrissey was involved again in the next score. From a 45 she found Anna Rose Kennedy in space and the Tipp forward showed all of her class to split the posts from 30 metres.

With time running out for Cahir it was crucial that they could get their hands on the ball. A determined Aisling McCarthy won them possession and from there Cahir launched their last attack to seal a dramatic late equalising score from Roisin Howard to set up extra-time.

It was a crushing blow for Aherlow and the setback appeared to affect their concentration in extra-time. Cahir took full advantage and scored 1-4 without reply, the pick of the scores coming from Roisin Howard who beat Emer McCarthy from close range.

Again, Emma Morrissey stepped up for Aherlow and reduced the deficit with a point but her efforts were in vain when Howard struck again to blast to the net.

Both sides traded points as time ran out but any hope of an Aherlow comeback was finally quenched when Niamh Costigan pounced to score a sixth goal for Cahir to secure victory.

Overall, Cahir were deserving of the victory. They had star performers all over the pitch and their big players stepped up when it mattered most.

Aherlow can count themselves unlucky not to hold onto their title and they too had big performers, particularly Emma Morrissey, who was excellent throughout.