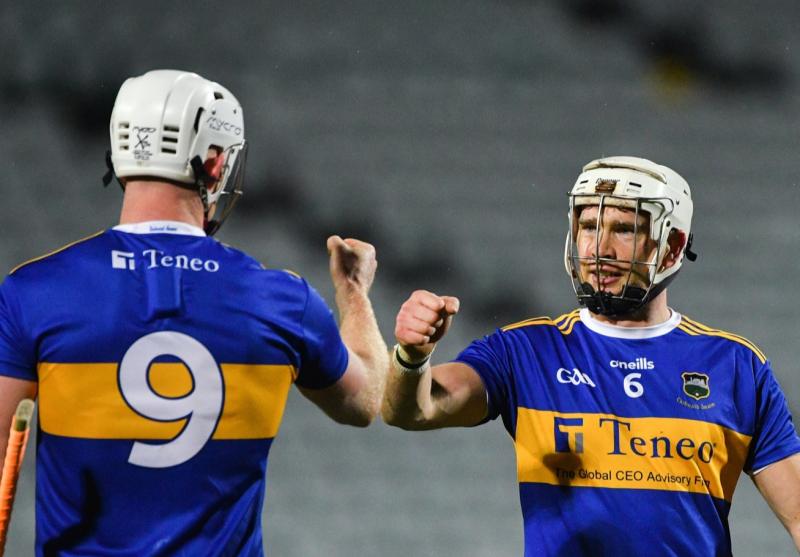 Tipperary's All-Ireland hurling championship campaign was revived with this hard-fought victory over Cork at the LIT Gaelic Grounds in Limerick on Saturday evening.
Not even a massive haul of 18 wides could prevent the MacCarthy cup holders from advancing to next weekend's All-Ireland quarter-finals.
For the second successive match Tipperary drew the short straw in terms of the weather, with wind and rain again waiting to greet them at the Shannonside venue.
However on this occasion they eventually coped much better with the opposition and the conditions, following their collapse against Limerick in the Munster championship a fortnight previously.
Despite playing with the storm in the first half, Tipp were two ahead at the break (0-9 to 1-4) but Cork had good reason to be the happier team at the conclusion of the first period.
The story of that first half was all about the 13 wides that Tipperary posted, as opposed to just three for Cork.
Tipp looked in trouble at the midway stage. They could have panicked but instead they trusted themselves and were duly rewarded.
After an indifferent first half they gradually found their rhythm after the turnover, points from Willie Connors and Michael Breen the prelude to their opening goal from Jason Forde in the 42nd minute, when he was picked out by Jake Morris and turned smartly before driving a shot home.
Tipp were now five clear but the outcome was far from settled. Cork responded and a great run and point from Robert O'Flynn had the sides level by the 58th minute.
Cork regained the lead with a Patrick Horgan 65, 1-15 to 1-14. But Tipperary's momentum had been only temporarily stalled.
Points from Dan McCormack and Paul Flynn restored their slender advantage, with man of the match Michael Breen keeping them a point clear after Patrick Horgan had again equalised from a free.
The crucial score arrived in the 69th minute when a piece of sorcery from Willie Connors, who showed outlandish skill to lift the ball and offload to Jake Morris in the blink of an eye, enabled Morris to break free and shoot to the net.
Cork pressed hard but an outstanding catch by Ronan Maher set up Alan Flynn for the insurance point, despite Bill Cooper's late point.
Michael Breen ran the show at midfield for Tipperary. He was aided and abetted by Brendan Maher, who got on a lot of ball in the second half; Dan McCormack, who worked hard throughout and Jason Forde, who was a tour de force in attack, weighing in with vital scores from placed balls and from play.
Seamus Callanan put his stamp on proceedings in the second half, a period of the game in which Jake Morris also made his presence felt.
Substitutes Willie Connors and Paul Flynn made immense contributions, while Ronan Maher and Alan Flynn also shone.
Cork seemed very well placed at half-time but they lost their way in the second half. Patrick Horgan was once again their main source of scores, while Seamus Harnedy struck some great points in the second period.
If anything, though, they over-relied on both those players for scores.
Mark Coleman was also prominent but in the end they were outfought by their opponents.
The wind and rain blew into Cork faces for most of the first half, but they still managed to breach the Tipperary defence for a priceless goal in the 22nd minute. When a Tipperary pass went astray Patrick Horgan raced away from the cover before planting a low shot into the corner of the net.
That strike drew Cork level, after Tipp had opened up a 0-5 to 0-2 lead courtesy of scores from four Jason Forde frees and a fine effort from Michael Breen.
A Patrick Horgan free gave Cork the lead for the first time in the 24th minute, but Tipp recovered a deal of composure before the interval.
As the wind and rain mercifully abated, Tipp scored the last three scores of the opening half through Jason Forde and Dan McCormack (both from play) and Jason Forde's free to give them that narrow lead, and set them up for the second half.
Tipperary: Brian Hogan, Cathal Barrett, Ronan Maher, Alan Flynn, Niall O'Meara, Brendan Maher, Padraic Maher, Noel McGrath, Michael Breen (0-5), Dan McCormack (0-2), John McGrath, Patrick Maher, Jason Forde (1-6, 0-5 frees), Seamus Callanan (0-2), Jake Morris (1-0).
Substitutes: Willie Connors (0-1) for John McGrath (33 minutes), Paul Flynn (0-2) for Patrick Maher (53 minutes), Paddy Cadell for Noel McGrath (59 minutes), Dillon Quirke for Jason Forde (60 minutes).
Cork: Anthony Nash, Damien Cahalane, Colm Spillane, Sean O'Donoghue, Tim O'Mahony, Robert Downey, Mark Coleman, Bill Cooper (0-1), Luke Meade, Seamus Harnedy (0-4), Shane Kingston (0-1), Robert O'Flynn (0-1), Jack O'Connor, Declan Dalton (0-1), Patrick Horgan (1-8, 0-7 frees, 1 '65).
Substitutes: Stephen McDonnell for Robert Downey (48 minutes), Darragh Fitzgibbon for Declan Dalton (51 minutes), Conor Lehane for Jack O'Connor (59 minutes), Billy Hennessy for Shane Kingston (62 minutes), Aidan Walsh for Luke Meade (69 minutes).
Referee: James Owens (Wexford).

For more sport see The debate is over - it's a hurley!