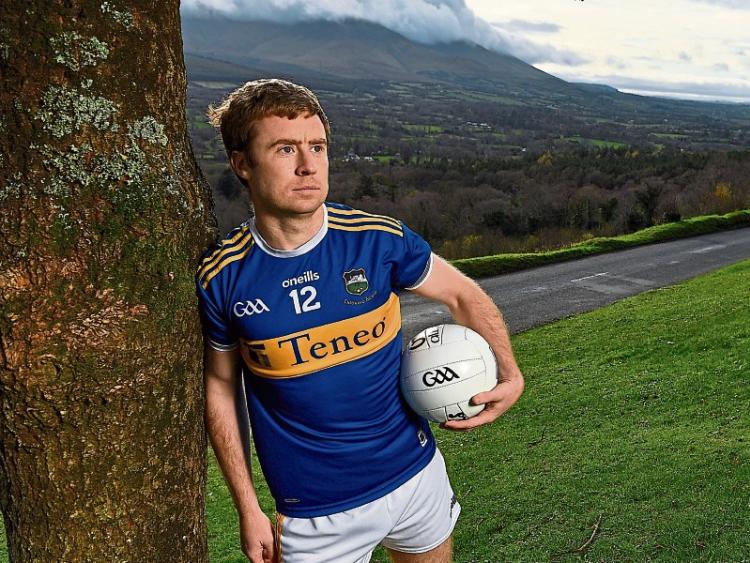 Brian Fox in the Glen of Aherlow at the GAA Football All-Ireland Series National Launch, ahead of Sunday’s All-Ireland semi-final. Picture: Sportsfile

The euphoria of winning the county’s first Munster senior football championship in 85 years has now been parked.

That’s according to Brian Fox, whose last-gasp winning point in the semi-final against Limerick earned Tipperary a shot at favourites Cork in the final, when their three-points victory rewrote the history books.

Speaking two days after that historic success, he said “we would love to be on this high forever but the reality is there’s still another prize on offer.

“We don’t want to be caught cold going into that (this Sunday’s semi-final against Mayo), still thinking about what we have achieved. We would much rather focus on what we can do going forward,” he said, adding that the gym session the players were due to undertake last Tuesday week, followed by a training session the following night would tell a lot, following the celebrations that accompanied the Munster final win.

It’s hard to believe that a team that was threatened with relegation to the bottom tier of the National League just seven weeks ago is now only 70 minutes away from an appearance in the county’s first All-Ireland senior football final in 98 years (the 1920 final was played in 1922).

“We know the prize that’s on offer is a place in the All-Ireland final but there’s no point dreaming about being in it,” says the level-headed Eire Og Annacarty Donohill player.

“Because if you start dreaming about being in it you’ll take your mind off what Mayo are, and Mayo are a huge challenge to us.

The semi-final offers an opportunity for atonement for Robbie Kiely, who had to leave the field after only eight minutes when he received a black card in the corresponding game four years ago.

“I’d say Robbie is delighted to have this opportunity. He probably has some score to settle himself and say hey, I deserve my chance to represent Tipperary in an All-Ireland semi-final properly.”

Brian Fox has huge respect for Mayo, and how they play the game and go about things.

“For a lot of players and a lot of people who watch Gaelic football Mayo is probably their second team, because everyone enjoys the way Mayo play.

“I was really impressed with Mayo against Roscommon (in the Connacht semi-final), how they were aggressive in the tackle. They won a lot of ball in midfield and put huge pressure on Roscommon’s kickouts.

“When they were defending against the breeze in the second half they just broke at pace. They were relentless and that’s what we’ve come to expect from Mayo.

“It’s up to management to decide what way we’ll approach the game. I would say they trust us, they believe in our ability to compete.

“At the end of the day, no matter what tactics you have, or what way you approach a game, as long as you approach it with the attitude that we’re going to give it 100 percent then normally you aren’t far wrong.”

He said that both times that Tipperary played Mayo in the last five years they were probably coming off “a bit of a high. In 2016, while we didn’t win Munster we had been in a Munster Final (losing to Kerry) and we beat Derry and Galway and we had a bit of momentum behind us. This year is a similar situation in that we beat three teams in the championship to get here.

“In 2016 it was just a huge occasion for us, it was the first time in so many years that we had been in an All-Ireland semi. This time we probably will draw on that experience that we have been there before. It’s not brand new to us, we want to be more settled.”

The 32-year-old is one of the most experienced players in the camp, having made his senior championship debut against Limerick 11 years ago. Since then he has lined out for the county 28 times, scoring 2-17. In 2017 he was captain of the team that won the division 3 final of the National Football League after a 3-19 to 0-19 win against Louth in Croke Park.

He says that the good bond in the panel can be attributed to the small pool of players from which the county draws.

“We have a lot of players from two or three clubs. Between Kilsheelan, Moyle Rovers and Commercials we have around 20 players alone from the panel and they are all from the one area, based around Clonmel town. Most of them went to school together so they know each other.

“They would have served under David Power at minor and U-21 level, and that familiarity is there with them. I haven’t heard one of them ever say a bad word about Davy and the way he approaches things, everything is for the good of Tipp football not just for now but for the future.

“He wants progress to be made across the board at the development ages, so that Tipp are competitive for a long time and not just every now and again.”

It’s fair to say that the time when the Tipperary footballers were the poor relations in a hurling dominated county has long since passed, a view with which Brian Fox agrees.

“When I first came in there was probably that inequality with the hurlers, where they seemed to get everything and we didn’t. But there was definitely a mindset change in the county board, you could see when they appointed John Evans they wanted to make a big appointment of someone to try and progress football and develop it.

“Obviously John Evans had his success (leading the county to division two in the national league). That reaped its rewards and there was a lot of work done by a lot of men at underage level, and for little reward for a long time and then we started to make huge progress underage. 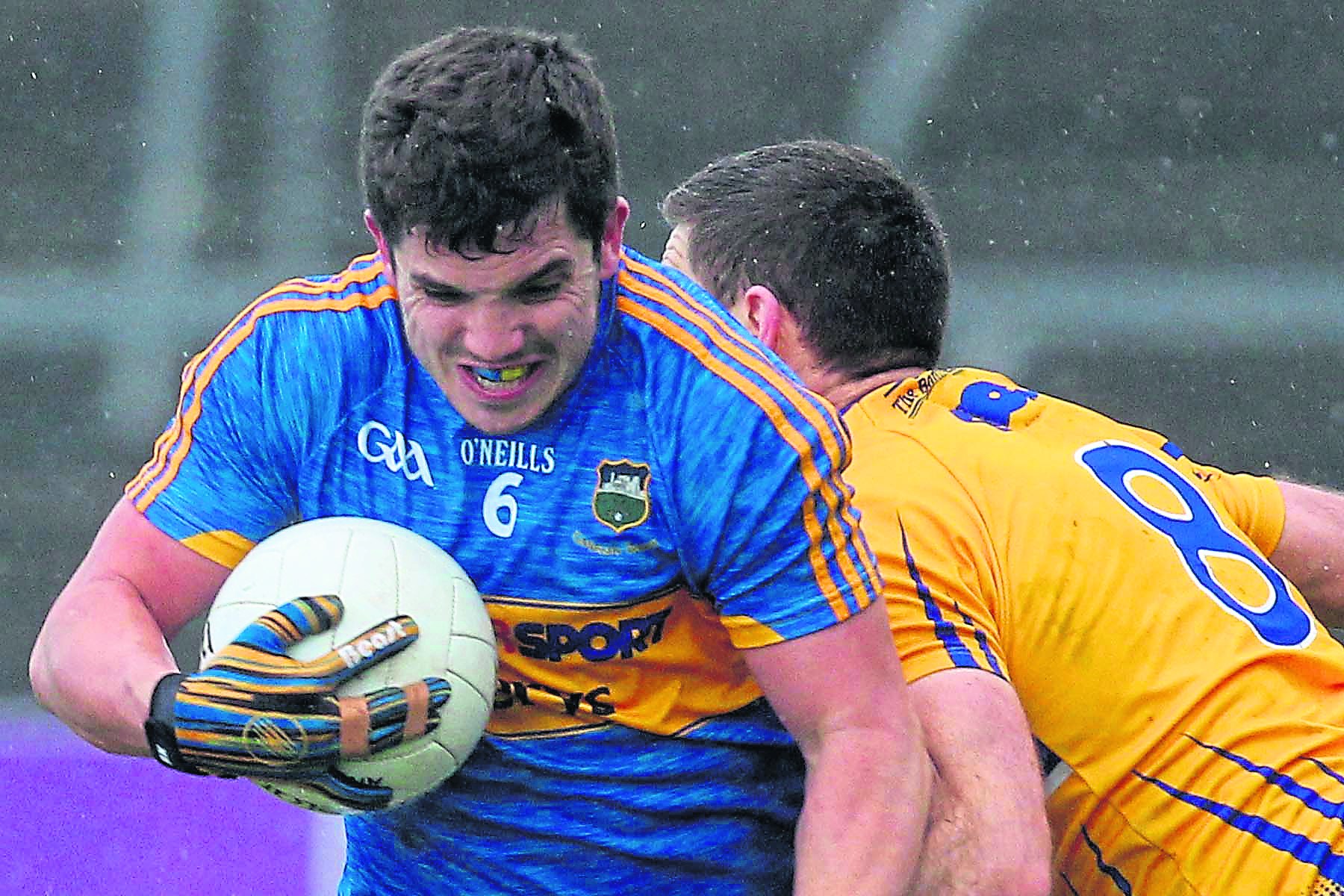 Above: Robbie Kiely has a chance for atonement on Sunday, after he received a black card when Tipperary were beaten by Mayo in the All-Ireland senior football semi-final four years ago

A schoolteacher at St Anne’s secondary school in Tipperary town, Brian received a guard of honour upon his return to the school after the provincial triumph, a gesture that he describes as “hugely humbling.”

He says he was very appreciative of all the messages of congratulations he received.

“It does make you appreciate that there is this real feeling of goodwill towards the footballers, and maybe it is something that can reignite the underage (in the county). We have seen a drop-off in the underage success with Tipperary in the last few years.

“And it’s not anyone’s fault but it is something that is worrying going into the future, when you don’t have these players who are constantly competing at the latter stages of the Munster and All-Ireland championships.

“If it does (reignite minor and U-21 success) I’d be delighted. I always want to see Tipperary competitive in hurling and football.”

The significance of the date of their Munster victory only enhanced the success and sense of achievement.

“People thought this is huge, a massive and momentous occasion, especially that it happened on Bloody Sunday. Everyone just bought into that feelgood factor, and the history of the GAA and how they handled the whole situation and marked the whole occasion, people really appreciated it.

“The amount of people I would nearly consider hurling people only who have contacted me and said it was a phenomenal moment....there were tears shed by a lot of people and that was said to me on numerous occasions.”

If there’s a slight tinge of regret from the Munster final it was the absence of  his family from Páirc Uí Chaoimh to share in his and the team’s hour of glory.

“When we drove back through Ballyporeen (the home parish of captain Conor Sweeney) on Sunday night and were welcomed back into the village, the family drove down to meet me and it was special to get to meet my wife (Siobhan), my kids (3-year-old Tadhg and six-months-old Lilly) and my parents and cousins. Because in fairness they are at every match.

“I’m very lucky that I have a family who are so immersed in the GAA, and so interested and who want to be there, they have travelled everywhere. I had people up in Derry earlier this year.

“It was special and it was bittersweet in one sense that they weren’t at the final  and able to share in that joy, because they have kicked every ball with me since 2006, when I first joined  the Tipp minor panel.

“I’m hugely appreciative of the fact they are so supportive and I’m a small bit disappointed they haven’t been there to share it.”

When it was put to him that the rub of the green could be vital for Tipperary on Sunday, he said “you make your own luck in one sense. If you’re totally focussed on what your goal is and you’re working relentlessly towards that you tend to get your own luck, I firmly believe that.

“It’s a case of ‘the harder I work the luckier I get.’ You get in the positions you weren’t in before simply because you put the work in. If there is a bit of luck maybe we’ll get it because of the work we have done.”