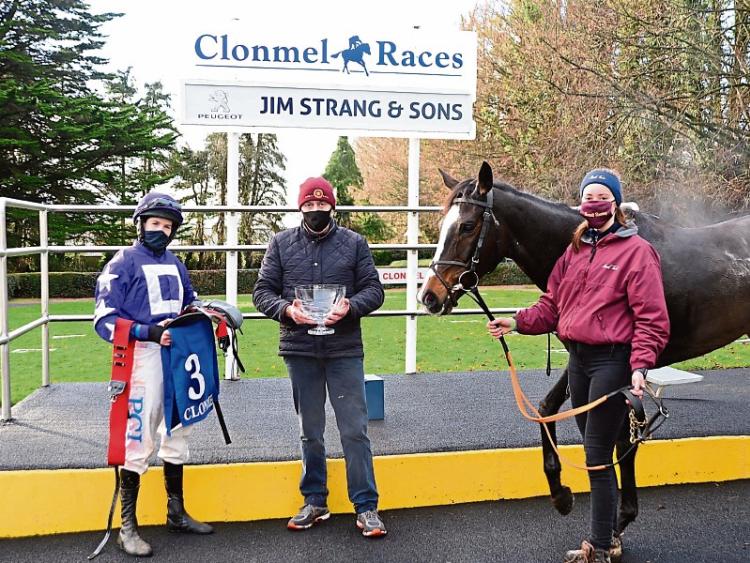 Above: It was Killenaule all the way in the Jim Strang and Sons, Kilsheelan (Peugeot) Hurdle at Clonmel Races. Winning rider Rachael Blackmore is pictured with trainer Martin Hassett, groom Megan Hassett and the winning horse Mary Frances

There was a tremendous result for Martin Hassett’s Killenaule stable at last Thursday’s Clonmel horse racing fixture when the hardworking trainer scooped the second double of his career through No Grey Area’s, and Jim Strang and Sons Kilsheelan (Peugeot) Hurdle scorer Mary Frances.

The latter, who filled the runner-up spot behind The Storyteller in last year’s renewal, was backed from a morning show of 8/1 and Rachael Blackmore’s mount took the honours at a price of 9/2 in style by 15 lengths from the odds-on favourite and Irish Grand National winner Burrows Saint, who had no reply to the winner on the approach to the penultimate flight.

Mary Frances was named after her Knockgraffon owner/breeder John O’Mahony’s mother and Hassett said “It’s a big boost for them and she was due that after getting pipped on the line by The Storyteller last year.”

The trainer, who gets most of the work done with his 12 -strong string under floodlights on his gallop from 5.30am while the majority of the country is still asleep, before beginning his full-time job in Coolmore at 7am, added “she’s tough and genuine and gives 110% every morning and at the races.

“My brother Michael, who was 63 yesterday, rides her every day and we’re mad to get black-type for her but all those mares races are over two and-a-half miles.

“There are no three mile black-type races for her unless she takes on the geldings or goes over fences.”

Mary Frances certainly had her supporters, including race sponsor Jim Strang, the only Peugeot dealer in county Tipperary, and his son Mark, the company’s sales manager, who have been sponsoring a race at Powerstown since 2003.

They were cheering her on last year and Jim said “the owners are good friends of ours and I rang them immediately after the race to congratulate them.”

The five-year-old races in the colours of the trainer’s wife Deirdre and Hassett stated “he has been threatening and threatening and it’s no secret we think a lot of him.

“He’s as tough as nails and it’s no coincidence that he’s in the same box as (subsequent Cheltenham Festival winner) The Conditional.” 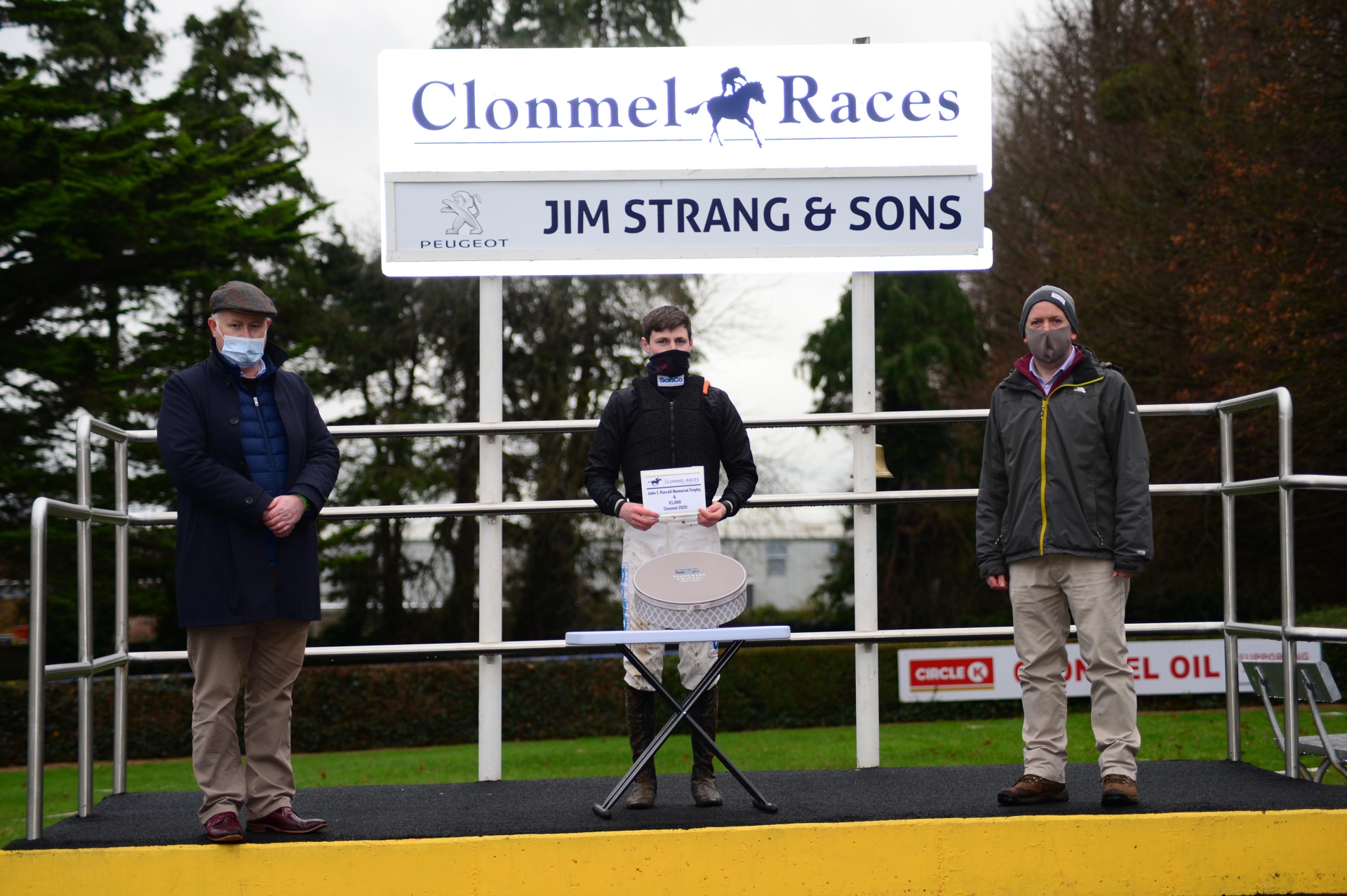 Above: Sean O’Keeffe won the John T Purcell Memorial Trophy and €1,000 for top Claiming Professional National Hunt Jockey at Clonmel in 2020. This competition was kindly sponsored for the tenth consecutive year by John Purcell O’Dwyer in memory of his grandfather, who farmed on lands bounding Clonmel racecourse. Sean is pictured with DJ Histon, racecourse manager (left) and Eugene Cooney, racecourse sales and marketing manager

Rachael Blackmore, whose father Charles supplies Martin Hassett with his horse feed, made it a red letter day for Killenaule when doubling up aboard Gigginstown’s even-money favourite Epson Du Houx in the Clonmel Racecourse Supporters Club Beginners Chase.

The Henry de Bromhead-trained hot pot jumped a little to his left, but was otherwise big and bold and had the race in the bag a long way from home.

Blackmore’s boyfriend Brian Hayes was on the mark in the Clonmelraces.ie Novice Handicap Chase courtesy of Seamus Neville’s front-running grey Notice To Close, who followed up his Cork success eleven  days earlier with a seven-length win over the favourite Golden Jewel.

Philip Fenton and Gooldscross-based Sam Curling were other local trainers on the target, through the odds-on favourite Stand Off, ridden by Mark Walsh in the Maiden Hurdle; and Pepite De Belle’s one and-three-quarter length victory under Jordan Hart in the concluding qualified riders Maiden Hurdle.

Clonmel racecourse hosts its first meeting of the New Year on Thursday January 7 and wishes its supporters a safe and Happy Christmas and New Year.