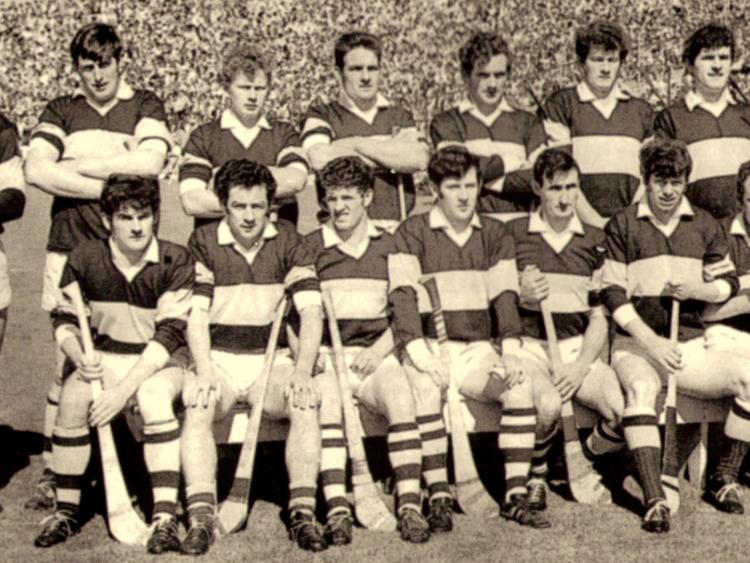 Theo English RIP July 1930 – January 2021
The news of Theo English’s passing last Sunday morning was greeted with widespread sadness throughout the GAA community in Tipperary and nationally. All through his life, Theo was a major influence on so many people both on and off the field and indeed outside GAA circles also.

He has been described as one of the greatest players to ever play for Tipperary and the best overhead hurler the game has ever seen. In a glittering career which spanned the early fifties to the late sixties Theo won every honour in the game. A member of one of the greatest Tipperary teams of all time his record speaks for itself. 5 All Ireland senior medals in seven appearances, 7 Munster medals, 8 National League medals, 4 Railway cup medals and 5 Oireachtas medals plus a junior hurling All Ireland medal in 1953. He was included at centre-field in Tipperary’s hurling team of the century.

Not only was Theo a hurler of renown, he was also a talented footballer, winning county titles with Clonmel Commercials and the Old Bridge and a Munster Junior Football title with Tipperary in 1952. Following a glittering playing career he continued to make a huge contribution to the GAA and was a senior hurling selector for Tipperary’s All Ireland successes in 1971 and 1989.

Following his time as an inter county selector Theo went on to make a positive contribution to several club sides and he brought something special to every club he was with and was described by many as the best judge of a hurler in his time. He was also an excellent referee and refereed many important games around South Tipperary. He served on the Tipperary County Board for a time and was Tipperary’s representative on the Munster Council for a one-year term. While these were the highlights, they were only the tip of the iceberg in terms of his outstanding contribution to the GAA.

Coaching & Games Development
Notwithstanding the current restrictions Games Development personnel are busy planning for the coming year and bookending 2020 and signing off completed plans. January is traditionally a very busy time for preparation of upcoming events and recommencing projects for the year ahead. GDA’s are finalising reports and entering data on the Management Information System. This is essential information for Croke Park to get a clear picture of events at county level and to assess what is working and what needs tweaking. It is also essential information on participation and activity levels which are presented to government bodies, Irish Sports council etc for funding and grant purposes.

The Coach Education season is now in full swing. Currently an online foundation course is underway for new coaches coming into the system. This is a very important stage. All coaches are required to have as a minimum achieved foundation level status before they commence with their team. They must also be Garda vetted and have completed a “child protection” awareness course. Sixty coaches have now signed up for the course which will be monitored by Games Development for progress reports.

A major club development program will commence in 2021. This will be in conjunction with Munster Games Development who have designed a specific course for all clubs in the province. The course is built on seven pillars which are recognised as essential if a club is to function to its full capacity. The final touches are being put to the project presently and roll out will commence over the coming weeks. Games Development Administrators will lead this program at local divisional level.

The change of age grades to the uneven ages is in the initial stages of operation. Games Development are working closely with County and Divisional Board na nOg to ensure a smooth transition. The age grades are U7/9/11/13/15/17 for mainstream games and competition. Alternative even ages may be used as is deemed necessary at later stages in the season. Games Development will be organising a Go Games fixtures program at U7/9 level in both codes. This work is ongoing and will kick in when guidelines allow.

Hands on school’s activity is on hold for the moment, however GDA’s will be making contact towards the end of the month to assess progress and requirements. Schools have made a huge effort to facilitate GAA activity in the current climate and we are confident that once restrictions are lifted the various scheme will recommence.

The underage county academy program was severely curtailed in 2020. Great efforts were made in early December to bring U15/16 Hurling and Football squads together for a couple of sessions. Our sincere thanks to the mentors and selectors for their assistance at a time of the year when they could quiet easily have opted out. Without such people volunteering we would not be able to run the program and we are very grateful to those involved, not only for their time but also their expertise at all levels of coaching and team management. We are incredibly lucky to have people of quality and ability, who know what is expected from the development squad process.

We will be re-engaging with them again over the coming weeks regarding the 2021season. Croke Park have set the Academy match dates, for 2021, at this point and once restrictions are lifted and funding cleared, we will commence the 2021 sessions and fixtures calendar. On a point of clarification, no player is being asked or forced to select a code over the other. Contrary, all GDA’s are committed to ensuring that any player who wants to try out in either code will get the opportunity to do so. For operational and other purposes dual players are restricted to four for a period to facilitate the smooth running of the program, but every player is then reintroduced and will get further opportunity at both codes.

It is the committee’s intention to run Easter and GAA Cul Camps again in 2021. Planning of these events is well underway and further information will be issued by the GDA’s over the coming weeks. We are hopeful that restrictions will allow such activity and feel confident based on 2020 experiences that a full camp program can take place.

Health & Wellbeing
Clubs who attended the Healthy Club Conference Webinar some weeks ago will remember the presentation from the keynote speaker Psychologist Shane Martin. Shanes presentation captivated everyone, encouraging us to focus on having a positive perspective on life.

Sligo Libraries Healthy Ireland Campaign are partnering with Shane in delivering a series of free online webinars that cover Resilience and Mindfulness. There are four in total, no need to pre-register, all webinars will commence at 7pm. For further details please see link
https://sligolibrar.
.ie/welcome-/news/

Cumann na mBunscoill 50th Anniversary Publication
Cumann na mBunscol as we know it was founded in 1971 and will celebrate its 50 years in existence this year. Although the current pandemic has put many events on hold, Cumann na mBunscol are currently in the process of compiling a book which will document both in words and in pictures, how Gaelic Games and its promotion has evolved in primary schools over the past 50 years.

A committee was put in place last year to oversee the production of the book and an email has been circulated requesting information from people who are currently or have previously been involved. It is intended that the publication will be a high-quality hardback, A4 size book that will feature every county and province along with well-known players in their primary school days, Cornmarket/Roadstone awards and INTO mini sevens. If you have any information that may be beneficial to this production, please do get in touch with the Cumann na mBunscoil Tipperary.

Killenaule GAA “Spinning” in to 2021
In recent years, Killenaule GAA has put huge work into developing their facilities and the fruits of this labour have clearly been seen in the opening of a new sand-based pitch, a fully floodlit main pitch, a new three bay hurling wall and an extended carpark. However, the ambition has not stopped here with further pitch and facility developments being pursued with particular focus being on the establishment of a club gym that aims to serve not just the club, but the community.

, in the lead up to Christmas, Killenaule GAA put their shoulders to the wheel once again when they embarked on, what turned out to be, an extremely successful 24 Hour Spinathon Fundraiser. The idea was simple, get some spinning bikes and keep them moving for 24 hours. Budding cyclists from all corners of the parish put themselves forward to take part with over fifty taking to the saddle. Armed with three spinning bikes, each backed by sponsors from not just Killenaule, but even as far as Australia. Each cyclist gave an hour on the bike with even some friendly competition breaking out amongst the competitors.

The event was heavily promoted through social media and before long, the donations started to flow at a scale that the organisers could not believe. Through an iDonate page along with some offline donations, the club managed to raise upwards of €17,500 which totally eclipsed the expectations of all involved. The support and sponsorship shown for the event was immense and Killenaule GAA cannot acknowledge enough, the enthusiasm and generosity shown by so many for our club. The money earned has given the club a fantastic platform to develop a new state of the art gym along with developing the overall facilities and aesthetic of the club.

GAA Oral History
In 2009 the GAA oral history project was commissioned. A number of interviews were carried out with Tipperary GAA people and we will be bringing them to you over the coming weeks on our social media platforms. In the first episode we hear from Drom & Inch club member Alice Costello, the interview is now available to listen to through the following link https://www.gaa.
ie/the-gaa/oral-history
/alice-costello/