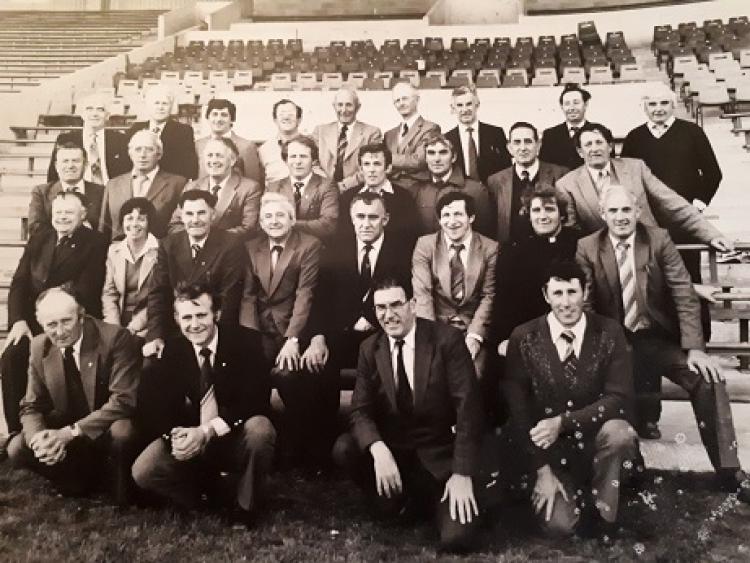 A Blast from the Past - Tipperary Centenary and Development Committee and guests pictured at Semple Stadium in 1984.

The GAA is proving a far more effective communicative machine that our government right now with the Association adopting a very sensible 'wait and see' approach to the recommencement of training and games.

It has been more than a little annoying over the last ten months to hear Minister after Minster spouting drivel, contradicting each other and making predictions which frankly, have no basis. And, all of it is going on unchecked - imagine if any sporting organisation were to make the same kind of statements day after day - there would be holy uproar.

But, our senior politicians can take to mainstream media, Twitter, Facebook and whatever other social media platform their mandarins suggest they should be populating, to force their State of the Nation addresses on people. Imagine if a multiplicity of sources were to be issuing statements on behalf of the GAA, in the same way as a multiplicty of Ministers are doing on behalf of the government. It is not serving the government, the country, or the people well - in fact, these pronouncements from the altars of the elected are only self serving.

Thankfully, the GAA has not followed suit and the the measured approach adopted is a sensible one.

For instance Fergal McGill, the GAA Director of Club, Player and Games Administration has said in the January Club Newsletter that the Association is committed to ensuring that any delay on the inter county season will not have a negative knock-of effect on club championship games.

With Level 5 restrictions still in place and with the official resumption of inter-county training already postponed from its proposed January 15 date, there is speculation around the proposed July finish for the All-Ireland senior finals. However, Fergal McGill has sent a message to club players to reassure them that their window of championship activity will not be forgotten about. He said:

“There will be a club season. Regardless of whether the inter-county season is delayed or not, our intention is not to compromise on the time available to clubs.

“If the inter-county season were to get delayed, we would look at pushing the concluding stages of the AIB Provincial and All-Ireland Championships into January of 2022. This would ensure the overall period of time available in the calendar for counties to stage their internal club championships would not be negatively affected by any delay in getting the inter county season up and running.”

That is music to the ears of all club players - 100% of the playing population of thr Association remember, with only 2% only getting to don thier county colours.

The success of the split season model last summer has led to a split season being put in place for this year, due to start with Allianz League competition in February and leading into a Provincial and All-Ireland Championship that would have finals finished by July 18.

Counties will still be free to organise and play club games without their county players in cup or league competitions during this time, and with a definite post July calendar in place for when AIB Club Championships would be taking place. Now that Level 5 restrictions are extended into February and possibly even March, Croke Park will have contingency plans for how inter-county competition formats may need to be reconstituted to finish on time.

McGill’s message is that the inter-county programme will be juggled rather than be allowed to run on indefinitely at the expense of the time available for club championships, and that any calendar overruns will be kept to the bare minimum. He also stated that it was important to remember that a number of 2020 Club Competitions and county finals at Senior, Intermediate and Junior levels remain uncompleted, and these will have to be factored into the overall fixture plans in each county in 2021.

Elsewhere, McGill has said GAA members need to appreciate that if it does become the new norm that it will take time for the split season model to settle in. He added:

“One thing I would ask of club players is to be patient. In introducing a split season we are talking about changing a culture and a way of doing things and it will take time for county boards to adjust competition structures and timings. They will not all get it right on the first go; but over a period of two or three years, if the split season is persisted with, I am hugely confident that Counties will be able to put in place an improved club programme and greater certainty for our club players.”

Club matches are not permitted during heightened Covid-19 restrictions with only elite level sport including senior inter-county Gaelic games being permitted once there is an easing of the current lockdown. If the inter-county programme was to be delayed significantly, fixture makers are looking at the concluding stages of the AIB All-Ireland club championships moving into January 2022. But like everything else in the Pandemic, a rapidly changing situation being dictated to by the level of virus in the community means that all dates will be reviewed.

In other words, the GAA is going to wait and see how things pan out before making any definite pronouncements on the running of games. Perhaps those occupying the corridors of power in Leinster House might take note.

I rather doubt it though.