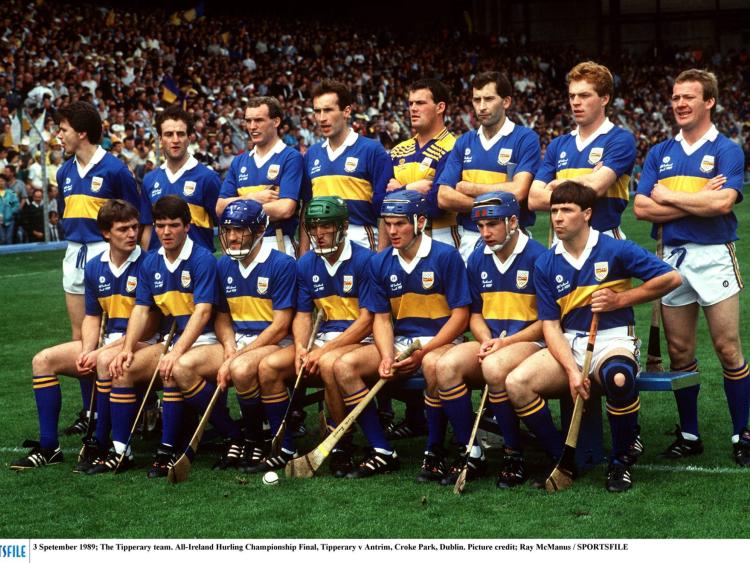 The Tipperary team which won the All-Ireland Final in 1989

Does Tipperary liuve up to the moniker of The Premier County?

In 1984 I produced a leaflet entitled, Why Tipperary is the Premier County!, for the museum exhibition of club presentations, which was held in the AIB Building in Liberty Square, Thurles in connection with the G.A.A. Centenary celebrations.

At the time the county was in a boastful mood about its G.A.A. past in spite of the fact that the “Famine’ had still a few years to run.

Recently I discovered the script, revised it and added a few more examples of the county’s achievements but, in the light of the stunning achievements of a neighbouring county in winning senior hurling championships in the meantime, I have changed the title from Premier to Prominence.

(1) The G.A.A. was founded in Thurles on November 1, 1884 and while seven has traditionally been accepted at the number of persons present on the occasion in Hayes’s Hotel, it is now widely accepted that the number present was thirteen.
While Clare man, Michael Cusack, was the inspiration behind the foundation, the great majority of those present were from Tipperary.

(5) W. J. Spain (1865-1936), Moanfin, Cloughjordan was the first man to win All-Irelands in hurling and football. Having gone to work in Limerick at an early age, he joined the Commercials Club and was selected on the Limerick team that won the first football All-Ireland in 1887. Limerick beat Louth by 1-4 to 0-3 in the final, with Spain scoring the goal, the first to be scored in an All-Ireland final. Two years later he was on the Dublin team that beat Clare in the 1899 hurling final by 5-1 to 1-6, with Spain scoring three goals for his side, and becoming the first dual All-Ireland winner.

(7) The first inter-county hurling match between selected sides, rather than club sides, was played at Clonturk Park, Dublin on June 8, 1890, when Tipperary met Dublin and won by 1-7 to 0-1. The Tipperary hurlers wore white singlets with the words ‘United Tipp’ emblazoned on them in green.

(8) Tipperary were the first county to win hurling and football All-Irelands in the same year. They did this in 1895 beating Kilkenny in hurling and Meath in football. Both finals were played in Croke Park on March 15, 1896.

(9) The brothers, Paddy and Jim Riordan from Drombane, were members of the Tipperary teams that won the two All-Irelands in 1895, Paddy, playing with Tubberadora in the hurling All-Ireland, is credited with the team’s total of 6-8. Ten years later he won a second All-Ireland with the Thurles Selection in the 1906 final. His brother, Jim, won an All-Ireland football medal in 1895, when Arravale Rovers defeated Navan O’Mahony’s in the final.

(11) Both 1895 All-Irelands were the first to be played in Croke Park, then known as Jones’s Road.

(12) The G.A.A. promoted athletics as much as hurling and football in the early years. James M. Ryan, Ballyslateen, Golden set up a world record in the high jump at 6ft 41/2in in the G.A.A. sports at Tipperary in August 1895. Tom Kiely of Ballyneale, Carrick-on-Suir was the All-Round gold medal in the 1904 Summer Olympics in St. Louis, U.S.A.

(13) At the first Munster Council meeting, held at Mallow on June 30, 1901, Dick Cummins of Fethard was elected President (chairman).

(14) The All-Ireland winners of 1887 didn’t receive their medals until the end of 1911. No provision was made in 1887 for such expenditure and the money to purchase them wasn’t provided until the 1911 Munster Convention. The first photograph of the winning team – at least some of them – was taken on the occasion.

(15)Tipperary won the first junior football All-Ireland, which was played in 1912. They defeated Louth by 1-4 to 1-3 in the final played at Jones’s Road, Dublin.

(17) Tipperary, together with Cork, took part in the first hurling tour to Europe. This happened in 1910 when both teams were invited by the Pan-Celtic Congress to Brussels to give an exhibition of hurling. Tipperary, led by Tom Semple of Thurles, won the first of two games by 5-0 to 3-0, but lost the second, which was played on the battlefield of Fontenoy.

(18) The first All-Ireland final in which teams of 15 took part was the 1913 hurling decider between Tipperary and Kilkenny at Jones’s Road on November 2. Kilkenny (Moincoin) defeated Tipperary (Toomevara) by 2-4 to 1-2

(19) Tipperary were the first county hurling team to travel to the U.S. when they went on a ten-week tour in 1926. This trip visited New York, Boston, Chicago and San Francisco. They were also the next team to visit the West coast in 1931 and the third team to do so in 1972.

(20) Tipperary won the Golden Jubilee All-Ireland hurling final in 1937, when they defeated Kilkenny by 3-11 to 0-3 at Killarney. The reason for taking the game outside Dublin was because of work on the new Cusack Stand at Croke Park had been delayed because of a building strike.

(21) One of the great hurling families of the country was the Leahy family of Tubberadora. Four of the family won All-Irelands. The oldest, Johnny, captained Tipperary to two All-Irelands, five Munster titles and one National Hurling League success. Sharing the same successes was his brother, Paddy. A third member, Mick, won an All-Ireland with Tipperary in 1916 and then, having moved to Cork and joining the famous Blackrock club, won two more All-Irelands with his adopted county, in 1928 and 1931. The youngest member of the family, Tommy, won an All-Ireland with Tipperary in 1930.

(22) A Tipperary hurler was the first man to captain three All-Ireland hurling teams. Mikey Maher of the famous Tubberadora team captained Tipperary, in 1895 against Kilkenny, in 1896 against Dublin and in 1898 against Kilkenny.

(23) Tipperary is the only county to win a senior hurling title in every decade since the foundation of the G.A.A.

(26) In 1958 Tony Wall was the first recipient of the Caltex Award, predecessor of the Texaco and the Hurler of the Year Award

(27) Tipperary played in the first hurling match to be broadcast,. The occasion was the replay of the 1926 Munster final against Cork at Thurles. The match ended in a draw. When Tipperary won the All-Ireland hurling final of 1971, it was the first game to by televised in colour by RTE

(29) Tipperary hurler, Jimmy Doyle, played in four minor All-Irelands. He lost the first to Dublin in 1954 as a goalkeeper and won the remaining three as a forward, against Galway in 1965 and against Kilkenny in 1956 and 1957.

(31) Tipperary, together with Kilkenny, had the biggest representation on the Hurling Team of the Century, Tony Reddin, John Doyle, Jimmy Finn and Jimmy Doyle.

(32) Roscrea were the first team to win the All-Ireland club championship, when they defeated St. Rynagh’s, Banagher in the 1970 final, which was played at Birr on December 19, 1971. The final score was 4-5 to 2-5.Tipperary were first winners of the under-20 All-Ireland hurling championship in 2019, defeating Cork by 5-17 to 1-18 at Limerick.