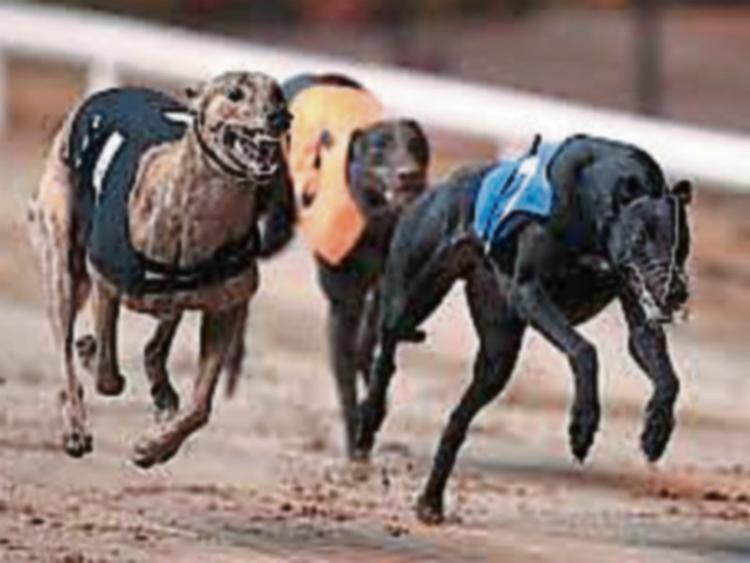 All the action from Thurles track.

All the action from Thurles Greyhound Stadium

The highest graded event at Thurles Greyhound Stadium on Saturday last came over 525 yards and a warm A2 contest, it duly returned the fastest winner of the night when Karen Murphy’s Trap Joey (Droopys Jet-Mt Heaton Daisy) dominated throughout his fourth career win.

An S1 winner with top grade placed form over the sprint distance at Thurles, the September 2018 whelp added a second 525 win in three starts since reverting to four bend racing as his early dash again proved a potent weapon.

Breaking on level terms from trap 3, Trap Joey quickly began to forge clear once in full stride and reaching the first bend with a length to spare over Clooneen Glory, doubled his advantage over that rival with a powerful gallop to the backstraight.
Impressing to the closing bends, the latter would test the resolve of the Murphy charge when back on the leader’s tail at third bend but responding in game fashion, Trap Joey stayed on admirably while stretching to four lengths at the line in a smart 29.26 (-40).

Megan’s hattrick secures Bogger double
Relishing her first ventures beyond the standard trip with back-to-back 725 victories at Kilkenny in her latest outings, Liam Peacock’s Bogger Megan (Good News-Bogger Bonnie) made the switch back to four bends for a first Thurles race outing on Saturday and duly completed her hattrick in the A3 570 as the local kennel registered a Saturday double.

Breaking on level terms from trap 4, the August 2019 pup would reach the first bend behind a leading trio who raced in tight quarters before Crickleowl Stan showed narrowly in front on the approach to halfway.

Never much more than a length adrift however, the Peacock pup drew ever closer nearing the closing bends before a daring passing move on the inside saw her strike the front while turning. Certain to stay stoutly thereafter, Bogger Megan drew clear to a three-length verdict while posting 31.93 (-40) over a game Crickleowl Stan, with Slaneyside Bambi always prominent in third.

The first leg of the Peacock double had arrived in the earlier A8 525 when comrade Bogger Ziggy supplemented his Kilkenny debut victory in most game fashion.

Evenly away form trap 5, he was forced to settle for second at the opening bend as Knockroe Golden displayed smart early zip to lead by a length upon turning. Never allowing the pacesetter an easy lead however, Bogger Ziggy drew level on the outside at halfway before eventually overhauling that rival in the home straight. Extending to a one length verdict, Bogger Ziggy repelled the late challenge of Flashy Layla by a length in 30.39 (-40).

Aoife makes smart debut impression
The second of Saturday’s novice events was for ON2 grade over 525 yards and gamely prevailing in what proved a warm contest, Michelle Dwan’s Borna Aoife (Droopys Jet-Borna Central) announced herself as another bright prospect for the local kennel.

Swift to stride from trap 1, the strapping 72 lb bitch took command of the rails in the early strides and reached the first turn with a length in hand of Newhall Patch. Still that same length to the good on the run to halfway, the February 2019 youngster impressed when doubling her advantage to the closing bends. Retaining ample resolve thereafter, Borna Aoife held the late rally of a gallant Newhall Patch by a length at the line while posting a very smart 29.50 (-40), with Boherna Millie staying very strongly when only a shorthead back in third.

The remaining novice contest opened the action and adding further to the recent good run of form for the Toomevara kennels of Liam McGrath, Rackethall Oscar (Droopys Buick-Leamaneigh Breda) produced a powerful effort beyond halfway to claim his ON3 525 in highly impressive fashion.

Bravely battling his way to second at the first bend when in pursuit of the early paced Demon Rebel, the September 2019 whelp reached the backstraight with all of six lengths to recover but displaying powerful pace to the closing bends, had closed right up on the pacesetter before checked at the third turn.

Renewing his effort while switching to the outside entering the home stretch, Rackethall Oscar ran out a one length winner over Demon Rebel in 29.84 (-40).

Tommy Spillane would gain compensation for defeat in the latter contest when his Here Paudie (Skywalker Puma-Flashy Beauty) continued his impressive progression of late when going back-to-back while landing the night’s A3 525.

Shedding his maiden tag in A4 company last time out, the October 2018 whelp ably coped with his upgrade following a smart break from an ideal trap 6 berth. Bested for early pace by Skirk Grace to his inside, the Spillane charge would track that rival to the backstraight before impressively striking the front on the run to halfway.

Well in command to the closing bends, Here Paudie ran out a ready winner with four lengths to spare over the running-on Knockalton Conor in 29.53 (-40).

Next best on the Saturday clock, John McKenna’s Rossestown Koo (Droopys Sydney-Littleton On Air) showed the benefits of her debut experience when shedding her maiden at the second attempt while landing the A7 525.

Breaking on level terms from trap 6, the September 2019 pup crucially denied Clough Flicka for a first bend lead before extending to two lengths over that same rival at halfway. The latter battled bravely to retain her second place thereafter but was that same margin adrift of the McKenna charge at the line as Rossestown Koo posted 29.77 (-40).

That winning time was matched in the concluding A4 525 as Joe Burke’s Demon Say Ten (Azza Azza Azza-Demon Cause) gained further reward for his consistent career start with a second win from five starts.

The Brendan Everard trained June 2019 pup has been impressing with slick early dash and again took command in the early stages with a smart break from trap 6. Skipping clear of Heavens Shadow to the backstraight, he held that rival at bay throughout a three and a half length verdict while posting 29.77 (-40).

There was a brace of 525-yard races in A5 grade on Saturday with the first of those going to Roger Brereton’s Rememberthetitan (Razldazl Billy-Satin Diva) as the wonderful veteran secured a first win of the season on the approach to his fifth birthday.

Breaking just off the pace from trap 5, the July 2016 whelp tracked pacesetter Cabra Sage to the backstraight before recovering from a near three-length deficit with a powerful run to the closing bends. Striking the front while turning, Rememberthetitan retained three parts of a length to the line in 29.93 (-40).

The second A5 525 contest saw Tina Morrissey’s Toolate Shannon (Toolatetosell-Security) double her win tally as the strong stayer converted in impressive fashion having been more prominent in the early stages this time. Impressing beyond halfway, the July pup held five and three-quarter lengths over Oakfield Zena in 29.87 (-40) for a second win in seven starts.

Not to be outdone, dad Tommy Morrisey got his Errill Cindy (Belles Direction-Geelo Lulu) off the mark at the third time of asking in the A9 525 as the August 2019 pup led throughout her six and a half length defeat of Hollyhill Amigo in 30.19 (-40) which came after Patricia Gavin’s Crescent Sydney (Droopys Sydney-Boherna Abbie) registered a quickfire double in the S7 330.

Trained by David Flanagan, the September 2019 pup secured a maiden win over 525 yards last time and following a poor start from trap 6 at the shorter trip, Crescent Sydney displayed impressive pace to range up on the outside of a packing field at the first bend. Rounding pacesetter Megans Call as most suffered crowding on the run to the home straight, the Gavin pup ran out a game winner with two lengths to spare over that same rival in 18.53 (-10).

Top Dog
Trap Joey will take a small rise following his fastest of the night performance in A2 but his early pace and ability to see out the trip well when on the bunny, can see him ably cope in A1.

Best Bitch
In a warm debut event, Borna Aoife impressed as a pup to follow while posting a very impressive 29.50 (-40)

One To Watch
Frank Dwan’s Boherna Millie (Droopys Jet-Free To Sky) was only a length back in third having been out with the washing at the crown of the opening bends when chasing home Borna Aoife. Recovering from bumps, she thoroughly caught the eye with pace beyond halfway and looks a certain improver next time out.