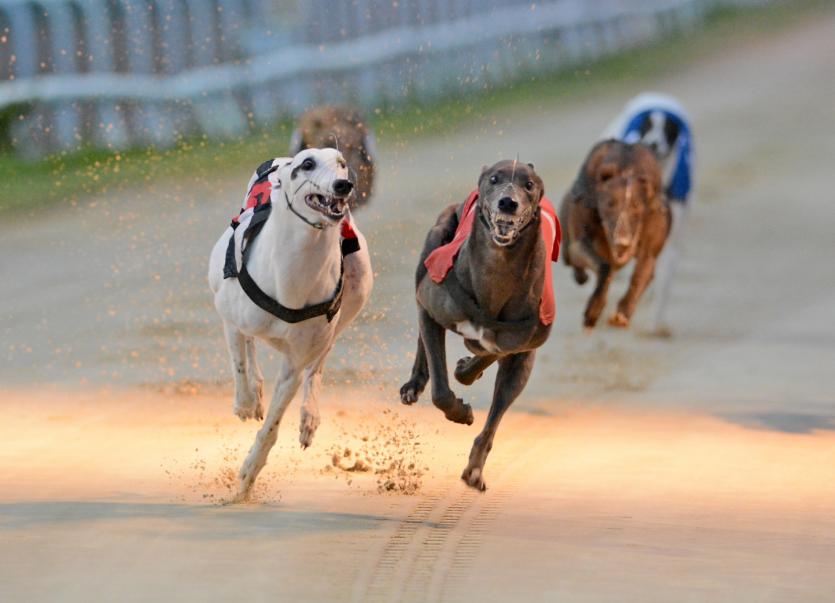 All the action from Thurles on Saturday night

All the action from Thurles on Saturday evening

Not for the first time in 2021, it was the sprint trip at Thurles Greyhound Stadium which provided the hottest return on Saturday last as Billy Murphy & Frances Mullan’s Ascot Blake (Laughil Blake-Ascot Grace) made a brilliant transition from four bend racing while landing the S2 330-yard contest, his first go at the shorter distance!

Highly consistent at 525 while advancing to a high of A2 level with very smart early pace at that distance, the December 2018 whelp always appeared likely to appreciate a venture into the sprint sphere.

Ideally housed in trap 1 on Saturday, Ascot Blake again found a smart break and immediately began to establish a lead with swift early dash. Stretching to a strong two-length advantage over Smokey Leah before tackling the opening bend, the latter briefly threatened when halving her deficit to the crown of the turns but powering to the home straight, Ascot Blake again skipped clear.

Completing a wonderful sprint debut with two lengths to spare over a gallant Smokey Leah, the fastest winner of the night posted a slick 17.85 (-10).

The earlier S4 330 contest also saw the winner produce a career best and a three-time runner-up from his ten previous starts, Ann Taylor & Ann Marie Morrissey’s Outside The Ring (Coolavanny Bingo-Ahern For Mary) was not winning out of turn when finally getting his head in front, and he did it in dominant style!

A big unit as a coursing convert, the January 2018 whelp was a length off the pace in the early exchanges following a moderate start from trap 2. Displaying a powerful turn of pace once in full flight however, he wasted little time in settling the race when streaking clear to the opening bend.

Tracked around the turns by Knockroe Mike, the Taylor charge would only extend further as Outside The Ring registered a facile seven length verdict while posting a fast 17.97 (-10) as Sim Of Kyle finished fast for second.

Borna back in winning Rhythm
Having had his hattrick bid scuppered last time out, Ruairi Dwan’s Borna Rhythm (Cloran Paddy-Borna Gem) regained the winning thread on Saturday when fastest over four bends while claiming a warm A1 525.

Breaking just off the pace from trap 5, the January 2019 whelp repelled Reckless Lee to his outer before bearing down on Killenaulerocket approaching the first bend. Striking the front while turning, the Dwan youngster stretched impressively clear while again displaying powerful backstraight pace and had the race in safe keeping before tackling the closing turns.
Never seriously threatened thereafter, his lead was reduced late on by a fast finishing Free From Desire but Borna Rhythm was full value for a two and a half length victory in a fast 29.18 (-40).

With just a sole victory alongside her six runner-up placings, James Heffernan’s Flashy Fifi (Pat C Sabbath-Cabra Fifi) deserved a greater reward for her consistency ahead of Saturday’s A3 570 event and going some way to redressing the balance in her 17th career start, the May 2018 whelp doubled her win tally in a dominant display.

Back to her best breaking form from trap 3, the Heffernan stalwart dictated in the early strides and crucially repelling a packing field of rivals at the opening bend, fully asserted on the run to the backstraight.

Bumping in behind saw her with a commanding advantage over Chestnut Chief at halfway and maintaining a strong gallop thereafter, Flashy Fifi posted 31.84 (-40) in a five-length verdict before Bogger Megan claimed second close home.

Gunboat is Premier prospect
Next best on the night was a hugely impressive debut from Sean Kenny’s Gunboat Premier (Droopys Jet-Dynamic Trend) when announcing himself as a pup to follow in the ON2 525.

Slow to stride from trap 5, the April 2019 whelp reached the first bend in fourth position and had passed just one rival before reaching the backstraight with over four lengths to recover on pacesetter Country Girl. Impressing on the run to the closing bends however, the Kenny prospect struck the front in eye-catching fashion while claiming the rails and quickly settled the race.

Bounding clear to the home straight, Gunboat Premier registered a four and a half-length verdict over the running-on Slanestown Nidge in a brilliant debut time of 29.31 (-40).

It was Buggies Beauty who set the early pace from the inside when drifting across the field through the initial exchanges but contesting a tight battle for second in behind that pacesetter, the Mounsey April 2019 whelp edged to the front approaching the turn.

In fine form of late, Saturday’s A3 525 saw Tom White’s Bob The Lad (Droopys Jet-Liosgarbh Elsa) claim a second win from his last three starts as the October 2018 whelp just about led throughout.

Defending the rails from an ideal trap 1 berth, the Nenagh raider skipped clear to a two-length backstraight lead when asserting around the opening bends. Pursued by Nowurmovin, it was Rahyvira Quinn who would emerge as the biggest threat when advancing to second at halfway but repelling that rival’s late bid, Bob The Lad was full value for his one length verdict in 29.53 (-40).

Having gone so close in the same grade last time, David Walsh’s Coffee Dock (Droopys Jet-Singing Hen) claimed her third career success in the earlier A4 525 with early pace key while recovering from a moderate break in trap 1.

Powering along the rail, the August 2018 whelp hit the front while turning on the inside of Foxrock Genius. Continuing to repel that rival to the closing bends, it was the power-packed finish of Four For Johnny which would secure second when closing fast in the home straight but in truth, Coffee Dock was never seriously threatened in a one length verdict while posting 29.69 (-40).

The rails pitch also proved beneficial in the A5 525 as Theresa Quinlan’s Bull Run Ria (Good News-Bull Run Kite) sneaked past rivals on the inside following a poor start but reaching the backstraight in third, the September 2018 whelp had much to do before securing a second race victory.

Setting sights on pacesetter Flashy Duke from over five lengths adrift, the Quinlan charge closed rapidly on the run to the closing bends before striking the front in the home straight for a most game one and a half length verdict in 29.70 (-40).
Claiming the concluding A4 525, Hollyhill Sonny (Kinloch Brae-Boom Time) secured a third win from just six career starts when getting the better of a protracted tussle with Cabra Tyson to score by a length in 29.72 (-40) for trainer Pairic Campion, while the early A5 525 brought a second race win for Tina Morrissey’s Clough Flicka (Kinloch Brae-Geelo Lu Lu) as the strong runner hit the front close home for a game one length verdict over Sadie The Goat in 29.92 (-40).

The remaining A6 525 delivered a most game first career win at the sixth time of asking for Billy Nevin’s Try Again Diva (Candlelight King-Cnoc Rosie) as the February 2019 youngster battled bravely through bumping for a backstraight lead before fending off Millbank Pixie by a length in 30.48 (-40).

Top Dog
Ascot Blake will be obliged to tackle top grade company in the sprinting sphere following his brilliant two-bend debut in the S2 330-yard contest.

Best Bitch
Flashy Fifi thoroughly deserved her second career win when claiming the A3 570 and more consistent than her win-rate suggests, will remain a big player in the same grade going forward.

Most Impressive Debut
Gunboat Premier very much caught the eye in his strong running debut win and appears highly likely to quickly progress from an already impressive 29.31 (-40) performance.

One To Watch
Dan Clancy’s Four For Johnny (Droopys Jet-Killduff Kerry) is no secret with seven wins to her name but A4 is unlikely to contain the January 2017 whelp for very long on the evidence of her strong staying effort behind Coffee Dock on Saturday.