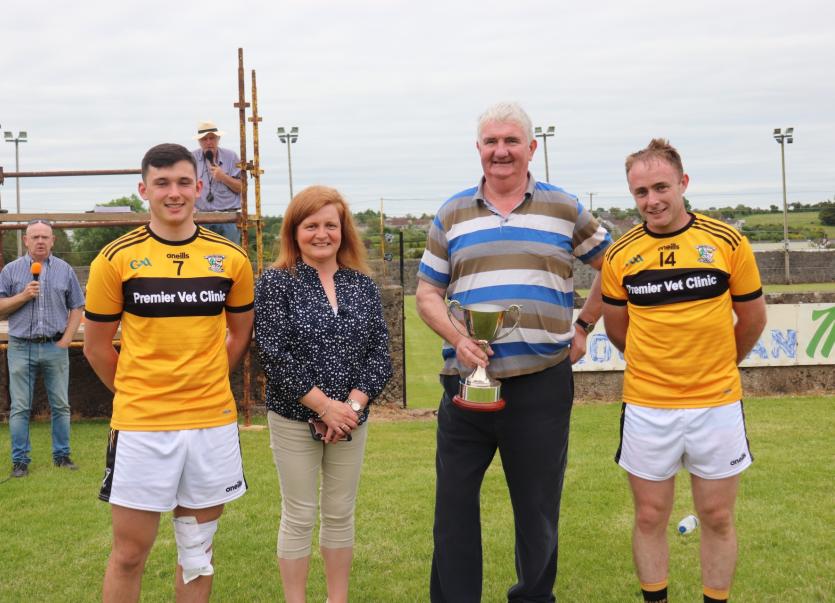 Knockavilla Donaskeigh Kickhams claimed a second ever West Intermediate Hurling Championship title, blowing Cappawhite away in a devastating opening thirty minutes in Sean Treacy Park on Saturday evening.  Played in superb conditions Kickhams hit the ground running and never looked back. Kickhams had dropped down in 1992 to Intermediate but bounced straight up with West and County honours. Having been relegated in 2017 Kickhams had failed to reach a West Intermediate decider on their previous two attempts while their opponents Cappawhite were contesting a second final in a row and hoping to go one better than 2019.  Though the stakes may not have been as high today, with the link to the County championship having been temporarily removed for the 2020 championship, beaten County semi-finalists Kickhams sent out a signal of intent for the upcoming 2021 Championship but more importantly claimed their first divisional honours since returning to the grade.

Kickhams got a dream start to the first half when they goaled in the second minute. A Paudie O’Carroll free found Dean Thompson in the left corner who came in along the end line, handpassed to Davy Butler who fired to the net on the goalie’s right hand side. Thompson turned scorer when he quickly added a point. Despite Rian Doody and Kevin Stapleton both pointing Kickhams were well in charge as they hunted in packs and their forwards had plenty of running. When Daniel Lonergan pointed in the ninth minute, Kickhams had opened up a five point advantage. Ryan Renehan pointed Cappawhite’s third point but it was Kickhams who had the gap at six before they added goal number two. Kickhams went short on the puckout to Kieran Breen who played it long and found Davy Butler who turned his man and raced at goal – the latter’s shot saved by Anthony Barry but Dean Thompson found the net after a scramble. Rian Doody responded with a pointed free, the first score of the game from a placed ball in the thirteenth minute. Kickhams leading at the water break 2-8 to 0-4.
Rian Doody and Kevin Stapleton pointed in between two Kickhams points from Paudie Slattery and Walter O’Carroll. Davy Butler now operating as a third midfielder brought the lead to eleven points in the twenty third minute as Cappawhite brought on Ross Dunne. Cappawhite’s luck certainly may not have been in as Patrick Barry got in on goal only to see his shot come back off the post. Minutes later at the other end Brendan Ryan showed his strength doing the hard work before Stephen Browne collected possession and finished for goal number three. Rian Doody continued his accuracy from placed balls but Kickhams weren’t finished for the half. Davy Butler collected possession round thirty yards out cut a hole through the Cappawhite defence and sending his shot to the bottom left hand corner.
Kickhams leading at half time 4-12 to 0-10. 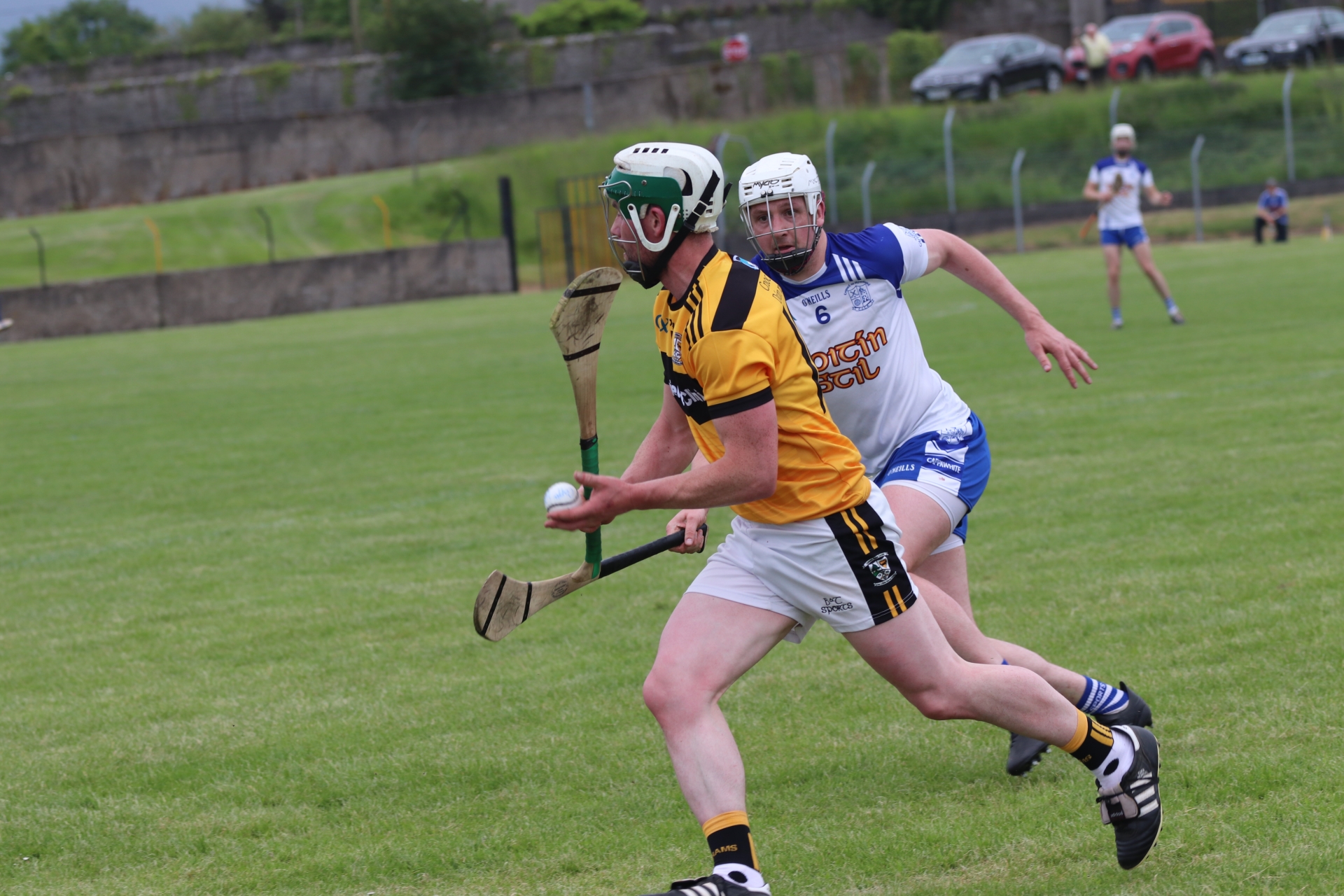 The early exchanges of the second half were fairly even Paudie Slattery (2) and Willie Barry (2) who came on just before half. Doody and Barry continued to add points for Cappawhite but the gap was thirteen points at the second water break, 4-15 to 0-14. The intensity did drop as the game progressed though credit to Cappawhite they kept fighting. With eleven minutes to go Thomas Costello a second half substitute goaled. Willie Barry the provider as Thomas Costello sent the sliotar to the bottom corner of the net from about fourteen yards. The gap continued to hover around the nine to ten point mark with wing back Lorcan Carr getting in on the act with a long range point. The sides exchanged further points with Rian Doody having the last say of the game. Rian Doody goaling from a free just outside the twenty one yard line, into the top corner of the net after Ryan Renehan had been fouled.

Afterwards Michael Ryan C, Chairman of the West Board presented the O’Farrell Cup to Kickhams joint Captains, Kieran Breen and Davy Butler in the presence of Catherine Hogan from the sponsors Tipperary Credit Union.

Kickhams will be very happy with the performance and a solid base to build their 2021 campaign on. They hit 4-16 of their 4-19 from play and certainly having played their semi-final just six days previous was a help. Their full forward line of Davy Butler, Dean Thompson and Brendan Ryan contributed 3-5 all from play. Davy Butler was a constant threat in the full forward and made further effect when brought out as a third midfielder later in the opening half. Butler would finish the game as an extra defender. Their half forward line and both midfielders were also all on the score board. Their midfield partnership of Daniel Lonergan and Walter O’Carroll were well on top with the latter finishing in defence. Their half back is definitely one of their strong points with Kieran Breen, Paudie O’Carroll (until he got injured) and Lorcan Carr well in command as well as providing the artillery for their forwards.

Cappawhite struggled with Kickhams first half pace, while also had to start without the injured Willie Barry, Dara McCarthy and Brendan Murphy. Barry did come on and made a big impact getting on a lot of ball as well as adding four points. They hit a total of 1-11 from play. Their bench contributed 1-5 all from play while Rian Doody was their scorer in chief with 1-10, 1-8 from placed balls. His accuracy from placed balls keeping the Cappawhite scoreboard moving. David Buckley played well at full back as did Kevin Stapleton at wing back while Tom Treacy battled hard at wing forward.