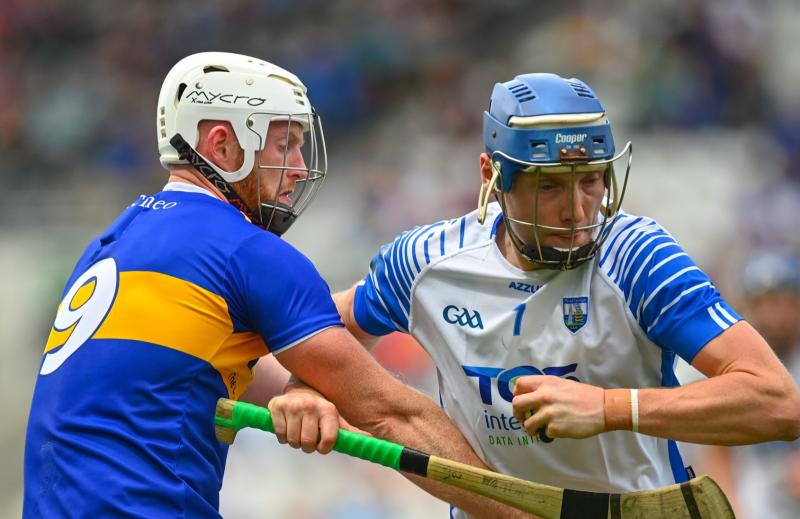 Tipperary's aspirations of winning the All-Ireland senior hurling title were shattered after a terrific tussle with Waterford at Páirc Uí Chaoimh this afternoon.
This was Waterford's first championship win over Tipp since the 2008 All-Ireland semi-final. But they finally came good at the ninth attempt and this quarter-final victory was no more than they deserved.
The Tipp players were slower to release the ball throughout and more ponderous in possession, and they always found it difficult to counter Waterford's pace and direct running.
For the second match-in-a-row, Tipp lost the game in the second half; and since winning the All-Ireland two years ago they have won just two of their last six championship fixtures.
Despite a gallant effort, they couldn't force any late dramatics to overturn Waterford's superiority.
Waterford led by just a point at the break but they were ahead by seven 12 minutes into the new half, after Stephen Bennett converted a highly contentious penalty.
They were eight ahead by the second water break and with 17 minutes remaining it appeared as if they were on course for an easy win.
However Tipp, despite their obvious difficulties, kept them honest and pushed to the end.
With Ronan Maher and Cathal Barrett their main men in defence, Michael Breen working hard and with the help of scores from Jason Forde, Ronan Maher, Mark Kehoe and John McGrath, they hung on by their fingertips.
When Willie Connors scored in the 68th minute they were just a goal in arrears, before a Jason Forde free in the last minute of normal time cut the deficit to just two points.
However Waterford finished with a flourish in additional time. Neil Montgomery hit a point before following up with a goal to seal the victory. And they still found time for further points from Montgomery and Colin Dunford.
Tipp will also reflect on three goal chances that they squandered in the second half. In the 55th minute a Seamus Callanan ground shot trickled wide after Waterford goalie Shaun O'Brien had denied Jason Forde.
Then John McGrath had a goalbound shot deflected for a 65 after a great run by Mark Kehoe in the 67th minute. When John McGrath's shot was pushed over the bar by Shaun O'Brien in additional time, Tipp's last flickering hope was extinguished.

Waterford held a slender advantage at the break, 2-14 to 2-13, after an opening half of swaying fortunes; the teams were level four times, the lead changed hands three times and each side shot seven wides in a half of 31 scores, 26 of which came from play.
Tipp started with a slight breeze but Waterford settled faster and had an edge in the early sparring, with scores from Patrick Curran, Jack Fagan, Dessie Hutchinson and two from Jamie Barron helping them to establish a 0-5 to 0-1 lead by the sixth minute.
However Tipp produced a stirring response to that early dominance. Against the run of play in the sixth minute, Dan McCormack's delivery broke and Noel McGrath supplied the assist for Seamus Callanan to shoot the afternoon's first goal.
Callanan was at it again a minute later when, in a personal duel between the captains, Conor Prunty misjudged the flight of Jason Forde's lob and Callanan buried a shot past Waterford goalie Shaun O'Brien.
That put Tipp ahead by two points but in an evenly-fought contest Waterford restored parity through Austin Gleeson's goal in the 11th minute, when he was put in the clear by Jamie Barron and Jack Prendergast.
The scores were still deadlocked at the first water break, 2-6 to 1-9, before Waterford seized the initiative once more. Jack Fagan pointed them into the lead before Dessie Hutchinson fired their second goal home in the 22nd minute, when he was set up by Patrick Curran and Jack Prendergast.
However a pair of points from Ronan Maher, Jason Forde's free and a point from play from the same player, and two beauties from Bubbles O'Dwyer ensured that there was only a point in it at the midway stage.