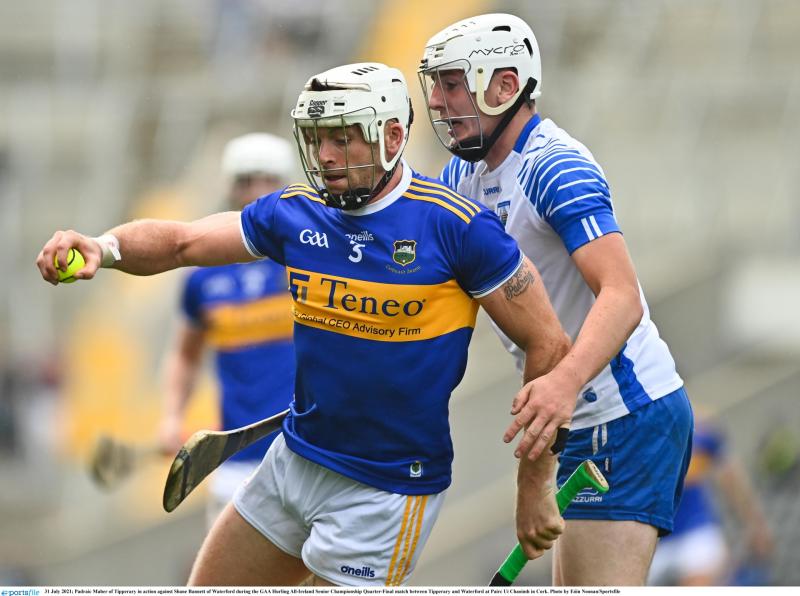 Tipperary's defeat in the All-Ireland senior hurling quarter final on Saturday last put the tin-hat on a disappointing spell for The Premier County which saw the minor and u20's also dumped out of their repsective campaigns.

Unfortunately, we can have no complaints on any front really - the minors were so far off the pace against Waterford, it was chillingly uncomfortable; and the u20's were simply not good enough to defeat that fancied Cork side.

With the seniors losing to Waterford, a seventy three year gap was bridged - 1948 was the last time Waterford did the minor and senior double over Tipp. They could have won the u20 too mind - only in extra time did Tipp manage to shake them off, before falling to Cork in the final.

Despite losing to Waterford and Limerick in this years campaign, the seniors fared better in 2021 than they did in 2020. So, does that represent progress then? Hard to tell.

On the one hand, there appears to be the incessant clamour to dispose of many of the great warriors who gave Tipperary some of the best days of the last fifteen years or so. But, before throwing the baby out with the bath water, cool heads are needed; a chance for breathing space required; and a root and branch assessment of where the county is at, necessary.

Despite what has been said and written about Tipperary needing young legs, fresh blood, new energy, the point must be made that Liam Sheedy and his management team have been looking at their squad of players in training for a few months now. They have made their assessments and picked their teams on the basis of what they have been seeing in the training field. Nobody else gets to see those training sessions or squad games, so nobody is better equipped to make decision based on what they are seeing, than the management team.

They have picked their teams based on form and expectation. And, while they have come up short, it was only just by the tightest of margins.

On the Waterford game - Tipp left three clear goal chances behind - normally the net would be bulging and the side would be readying themselves for an All-Ireland semi-final date with Kilkenny.

The Deise penalty, just like the Munster Final incident with Aaron Gillane, went against Tipp and had a big impact - it feels almost as though having benefited from that dubious penalty in the Munster semi-final against Clare, Tipperary were destined to get nothing for the rest of the season from the officials!!

Still though, Waterford hit forty points against Tipp - the biggest ever concession of scores against the Premier County in a championship game - incredibly 3-25 came from open play - what a magnificent return for Liam Cahill's men, but what a rate of concession from Tipp.

And, let's be frank, it wasn't always the defence which was at fault for the high rate of flag waving - the attack has a case to answer too when it comes to not meeting the required level of workrate. On the other hand mining 2-27 is an increadible return - the biggest ever scoring feat from a championship defeated team - now there's a dubious distinction!!

But, enough negativity. Tipperary have been involved in some of the most exciting hurling games this season - exhilirating, thrilling and utterly exhausting encounters which have left supporters drained, not to mention the players and management. They have played some of the most spectacular hurling - the first half against Limerick in the Munster Final was as good as we have ever seen. The problem was, we were unable to sustain it for long enough in any of the games.

The glass is half full in Tipp - perhaps even more than half full. What is required now is for the younger players to push on, make an impression, break into the team, and learn from the experience of the men who have delivered the last three All-Ireland titles.

The possibility of retirements always crops up at seasons end - this time round the managements position is also up for discussion having completed the three year term handed to them in 2019. Being involved with an inter county team is an enormous task - a 24/7 position which just never gives way. Liam Sheedy and his team are entitled to time to consider their positions - should they wish to remain, especially in light of the Covid years, they will presumably be afforded that right. Rebuilding Tipperary would be an attractive proposition for the Portroe man who would probably look to freshen things up a bit. Should they decide to go, nobody in Tipperary should have anything less than gratitude for what they have achieved.

The Club Scene
Thankfully, there is little time to ponder the inter county scene too much, or to dwell on the disappointment of ending the season without any silverware, with the club scene kicking in with a real vengeance this week.

There are matches galore, hurling aplenty and of course there is a real opportunity now for players who have designs on breaking into a county panel to make an impression.

The action starts midweek with the divisions getting the jump on the county championship and this of course means that there will be quarter finals later on. While the west and south divisions have tidy championships to run off in the senior and intermediate grades, the mid and north will take a bit more sorting out - the north especially will be challenging given the number of teams involved.

But, there are some wonderful games in store and supporters will be able to get to them by getting their tickets online. Streaming will also be the order of the day - how the whole scene has changed utterly over the last eighteen months.
By having the divisions playing off their championships first, the status associated with them remains intact for now - not having had some divisional finals last year didn't help their cause, but just see how eagerly they will be contested this week.

Winning a divisional title still means something to most clubs and there will be hell for leather from tonight (Wednesday) onwards when the first sliothar of the championship is thrown in - a white sliothar it will be; none of those yellow balls for us here in Tipp!!