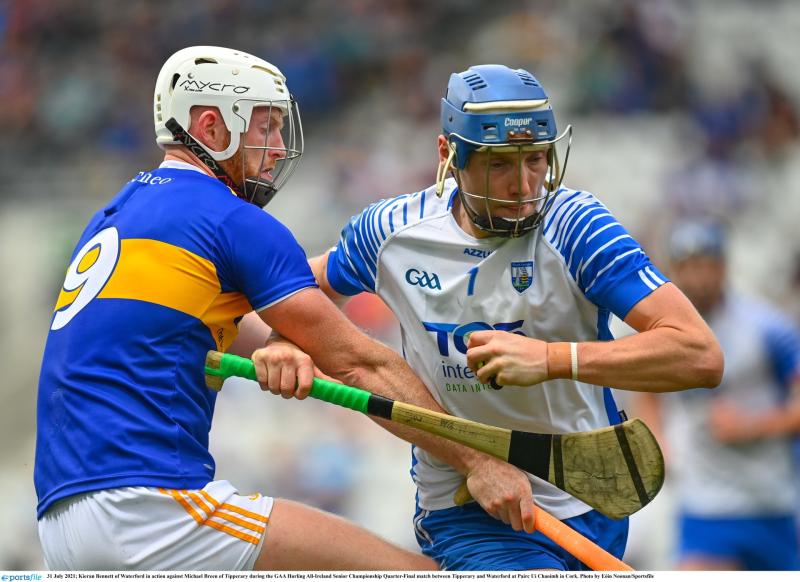 All you need to know about GAA in Tipperary

All Ireland Senior Hurling Quarter Final
It wasn’t to be for our senior hurlers last Saturday as they bowed out of this years championship after a hard fought game with Waterford in Pairc Ui Chaoimh.

It was a game that had everything and right from the very start was played at an electric pace. The game produced 73 scores in 73 minutes which shows the tempo it was played at. The Tipperary players gave everything they had in the game and were right in the game at the end of regulation time but a late goal for Waterford sealed the victory for them on a scoreline of 4-28 to 2-27.

Best wishes to Waterford as they progress to a semi final clash with Limerick next weekend and a huge thank you to the Tipperary players and management who have represented our county with pride and distinction throughout the 2021 campaign. This group of players lead by Liam Sheedy as their manager have given us all so much entertainment and brought much joy and happiness to our lives on many occasions and I have no doubt that they will do so again in the future.
We can all look forward to watching them with their clubs over the coming weeks in the various divisional and county championships and we wish them all the very best of good luck.

Munster Minor Hurling Semi Final
Our Minor Hurling team also bowed out of the championship at the hands of Waterford last Tuesday evening in Pairc Ui Rinn on a scoreline of 2-25 to 4-11 and we thank all of the panel members and team management for the hard work and effort they all put in over the last number of months. A large number of the panel will be eligible again next year while there is no doubt that those who are finished at minor level will go on to represent Tipperary at other levels going forward.

FBD Insurance County Leagues
Congratulations to Templederry Kenyons who recorded a 0-31 to 1-18 win over Sean Treacys in the final of the Group 3 hurling league which was played in Newport last Sunday, while Clonmel Commercials progressed to the final of the group 1 football league thanks to a 2-08 to 1-10 win over JK Brackens in Cashel. This weekend will see two finals taking place in the football league, On Friday in Ned Hall Park at 7pm local rivals Clonmel Commercials and Clonmel Óg will play for the right to be crowned group 2 champions and on Sunday in Cahir at 12 noon Clonmel Commercials will be in action once again when they play Aherlow in the group 1 final.

FBD Insurance County Championships
The round 1 draws for the senior and intermediate hurling and football championships took place last Friday evening and have thrown up some interesting clashes. All the draws are available to view on the Tipperary GAA website and on the various Tipperary GAA social media outlets.

Tipperary Clubs Draw
The final draw of the 2020 – 2021 year took place last Friday evening. First prize of a car or €15,000 was won by Michael Costigan who is a member of the Clonakenny club, while Knockshegowna’s Jimmy Hogan won prize number two which was a holiday voucher or €5,000. The lotto jackpot of €3,000 went to Knockavilla’s Annette Loughman and John Sweeney of Moyne-Templetuohy won prize four €2,000.

Congratulations to all this month’s winners and we now look forward to the new draw which will have some very good prizes as per usual. If you would like to join the Tipperary club’s draw you can do so through any club in Tipperary or by contacting Lar Na Pairce on 0504 22702.

Friends of Tipperary Football
The Friends of Tipperary Football will hold their annual golf classic in Thurles Golf Club over two days on September 24th and 25th. This event is always a very enjoyable outing and always attracts great support from clubs, businesses, and individuals throughout the county and further afield. If you would like to enter a team at a cost of €120 you are asked to contact the event coordinator Martin Dwyer on 086 2549154 for more details.

Health and Wellbeing
Date for your Diary:
The next Dementia Café will be held on August 19th online @ 7pm. Guest speaker will be Donal O’Shea Dementia Advisor for Limerick, Clare & North Tipperary. To join the event please email ballinakillaloe.dementiacafe@gmail.com for Zoom link.
Internationally the first seven days of August are World Breastfeeding Week. The aim of this annual event is to highlight the huge benefits that breastfeeding can bring to both the health and welfare of babies, as well as focusing on the health and wellbeing of mothers. To find a breasting support group in your area email www.cuidiu.ie

Health & Wellbeing would like to remind managements teams that mental attitude is just as important physical fitness. For players to develop and improve it is important to try and keep the negativity out of team talks, instead try and focus on the positive side of things and encourage improvement rather than demanding it. Young people have had a tough time recently and everyone involved in the team should be encouraged to look out for each other and to acknowledge that talking can greatly help relieve stress.

Healthy Club Officer (HCO) Training
With all GAA clubs now recommended to appoint a Healthy Club Officer (HCO), a two-hour training module has been developed to support those taking up or interested in supporting the role. Developed in consultation with both the National Health & Wellbeing Committee and representatives of the HSE’s health promotion department and the PHA, the content covers topics including the holistic nature of health, up-to-date national health statistics what this means for your GAA club, and how your club can become more health-enhancing.

It takes participants through the four building blocks of a ‘Healthy Club’ – Plan, Partners, Activities, The Club – to help ensure any work undertaken by clubs follows good practise, is sustainable, and achieves desired goals. The training is highly interactive and discussion based and rolled out by trained GAA health and wellbeing tutors through your County Health and Wellbeing Committee. Participants receive a certificate of completion, while each club represented also receives a Club Health & Wellbeing manual, filled with useful resources and case-studies.

Pitch Maintenance Advice
In his annual report, Ard Stiúrthóir Tom Ryan singled out grounds staff around the country for special praise as the condensed winter championship was run off without issue on pristine pitches across the land.

The GAA’s national pitch work group have been busy in recent weeks making sure that the good work continues into 2021 and beyond. Such was the success of a recent seminar held for ground staff in Munster that a plan is in place tol host similar gatherings on line for the other three provinces, while the details of the presentations delivered have also been made available.

Stuart Wilson is the Pitch Manager at Croke Park. He stated: “We carried out an ask the pitch expert seminar/webinar trial with 40 representatives from clubs around the Munster region which was very successful. The panel including myself, Dr Ian McClements (STRI) and John Coogan (Nowlan Park, Kilkenny). In the hour and a half session the Munster representatives asked all sorts of questions relating to pitch maintenance, anything from construction of pitches to mowing of pitches.
“Due to the success and very positive feedback of the event, we are now going to carry out an official ask the pitch expert with the Munster region later this month which will then move on to the other three provinces with dates to be announced.”

GAA Book Club, Book of the Month
The GAA Museum Book Club choice for August/September is The Gallant John Joe by George Cartwright. This is the first time our book choice has focused on an individual player and who better to start with than ‘Cavan’s Millennium Man’ John Joe O’Reilly?

In this well-researched biography, which was a labour of love for author George Cartwright, Cavan’s most famous player is celebrated through stories of his achievements both on and off the pitch. The book also examines the legacy left behind following O’Reilly’s untimely death at the age of 34.

Author George Cartwright is a native of Cornafean, the club where John Joe O’Reilly’s career started. Through this book he tells the story of O’Reilly both as a great man and as a great footballer. George has served the GAA at club, county and national level and is a retired school principal with a lifelong interest in local, family and GAA history.

Those who don’t have or can’t borrow a copy of The Gallant John Joe can purchase the book online from the GAA Museum Gift Shop throughout August and September for a discounted price of €16 and all copies are signed by the author.

Tipperary GAA Scene
If there is anything you feel should feature in this column going forward, please feel free to forward it to pro.tipperary@gaa.ie