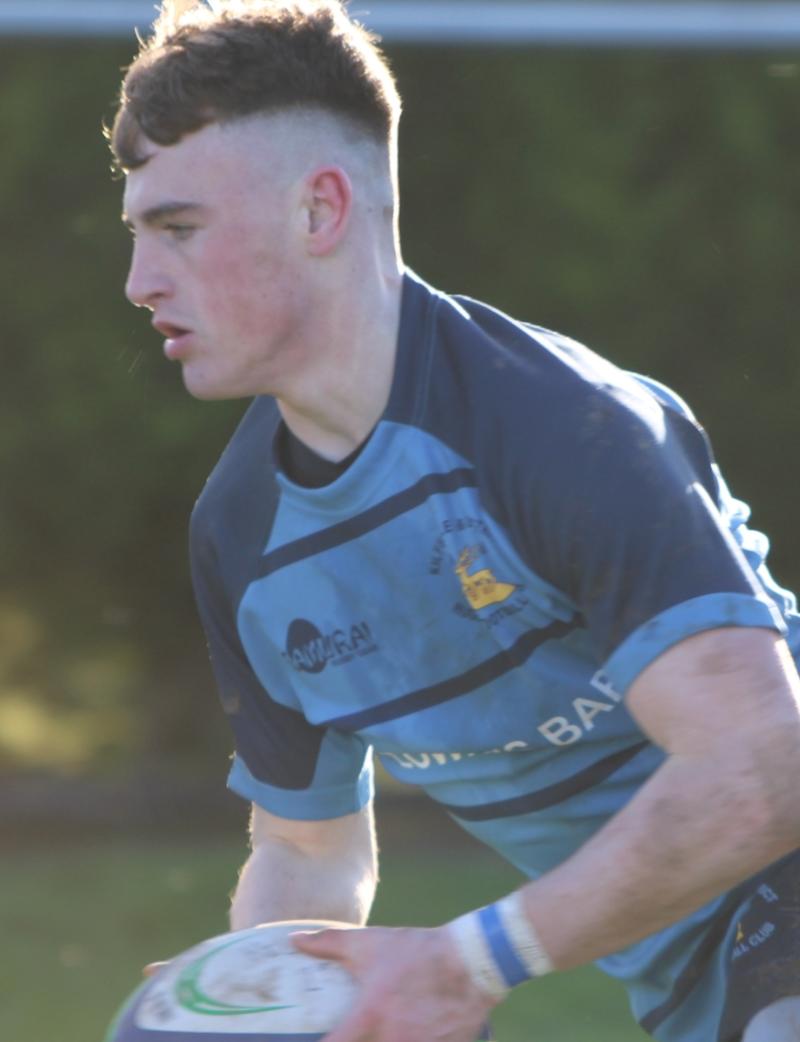 Travelling to St Senan’s in Shannon, Co Clare is never an easy task and Sunday’s game in the Challenge Cup was proving to be an even bigger challenge because of selection concerns for Kilfeacle, with a number of first team regulars ruled out for different reasons.
The game started in wet, cold conditions, with a breeze favouring the visiting side in the first half. Kilfeacle’s squad consisting of Darren Lowry, Conor O’Sullivan, Thomas Peters, Cathal Donovan, John Bourke, Kelan O’Connor, Simon Barry, Rickie Whitney, Adam O’Connell, Philip O’Connor, Christopher Farrell, Cormac Ryan, Keith Bourke, James Ryan, Darragh Kennedy, Kevin Kinnane, William Staunton, Evan Breen, Kevin Doyle and James Hogan struggled as a unit in the early minutes of the game because of so many positional and personnel changes.
A long-distance penalty from St Senan’s saw them take an early lead but eventually, after 17 minutes, Kilfeacle and District took the game to St Senan’s and Cormac Ryan scored a try in the corner after a great team effort.
William Staunton’s conversion kick from a tight angle hit the upright and the score was 5-3 in favour of Kilfeacle.
Another long-range penalty gave the lead back to St Senan’s on the 22-minute mark.
Kilfeacle’s dominance became obvious and it wasn’t long before they regained the lead with a well-taken try from Kevin Doyle after 28 minutes, which William Staunton was unable to convert from a very tight angle and in torrential rain.
The last play of the first half presented the opportunity of a penalty from the halfway line and William Staunton never looked like missing the mark. The half-time score was 13–6 in favour of Kilfeacle and District.
Straight from the start of the second half Kilfeacle continued to build phase after phase and St Senan’s couldn’t blame the weather. They were just not prepared for the blistering pace and intensity of their opponents at the restart.
With St Senan’s still reeling, Kilfeacle didn’t lose any impetus and with 50 minutes gone on the clock they notched up another unconverted try, scored by John Bourke, with William Staunton’s conversion attempt once again striking the upright.
The visiting support was jubilant and the home support worried.
Kilfeacle endeavoured to keep the onslaught going and it took them only four minutes before they added another try, which was touched down under the posts by Kevin Doyle.
William Staunton converted and increased their lead to 25-6.
Five minutes later William Staunton increased Kilfeacle and District’s lead to 28-6 with a well-taken penalty.
St Senan’s never gave up, even when the game was over as a contest. In the last 20 minutes the game lost its shape after a number of injuries and substitutions on both sides.
A dubious yellow card decision with 15 minutes remaining gave St Senan’s the opportunity to have a sustained amount of possession.
Kilfeacle were defending manfully but St Senan’s used the extra man very well and scored two tries, one of which was converted.
The scoreline was now 28-18 in favour of the visiting side. As soon as Kilfeacle were restored to their full complement they wrestled control of the game back from their opponents and were on the attack once more, threatening the St Senan’s tryline when the referee blew for full time.
Kilfeacle and District RFC’s next fixture is repeat away fixture against St Senan’s but this time in the league. It will take place on this Sunday October 10 at 2.30pm.
The team hopes that their supporters will continue to come along and support the Boys in Blue.

Both mini and youth rugby training continues at Morrissey Park (the Hill) in Kilfeacle every Friday night at 7pm.
With a primary focus on fun, safety, learning the skills and improving the all-important agility, balance and co-ordination of each child, we welcome back our regular players and extend a warm welcome to any new players who would like to come and play for the Blues.
The underage teams of Kilfeacle have experienced quite a degree of success over the past number of years and it is envisaged this year will be no different.
Children from the age of 6 and upwards are most welcome, and importantly parents of the children are encouraged to come to the sessions, meet the coaches of each of the grades, meet the other parents and generally integrate within the groups. So see you all in Kilfeacle every Friday at 7.