Midfielders Michael Lowry and Niall Sharpe were crucial to the victory

By: Francis Coughlan at New Inn

Arravale Rovers claimed the Tipperary Print & Design West U19A Football Championship title for 2021 with a deserved victory over Knockavilla Donaskeigh Kickhams under lights in New Inn on Wednesday night. Rovers led from the front and despite a laboured first half pulled clear in the second half with Evan Hawkins goal ten minutes from time effectively sealing the win.

Arravale Rovers playing with an aid of a strong breeze into the Cashel end goal had four points on the board in the opening three minutes. Dan O’Dwyer opening the scoring almost from the throw in and this was followed by points from midfield pairing Niall Sharpe and Micheal Lowry who would have a big impact on proceedings with their pace adding to Rovers attacking options. Kickhams slowly found a grip on proceedings and began working the ball through the hands into the attacking end.

With the breeze against them they had to get closer to the posts to shoot but this allowed Arravale Rovers to get numbers back. Sean Cannon eventually got them off the mark when he pointed from a place ball in the fourteenth minute and Stephen Browne quickly doubled their tally with a point from play. Arravale though responded with their first score in eleven minutes through Eoghan Lonergan and then Micheal Lowry. Arravale Rovers ahead at the water break 0-6 to 0-2.

Kickhams had looked dangerous during periods of the opening quarter with the running of Jamie Duncan, Sean Cannon and Stephen Browne causing Arravale Rovers problems though they continued to get numbers behind the ball to try and distort the Kickhams attack. Jamie Duncan gave Kickhams hope when he stole a march in behind the Arravale defence, collecting a high ball before shooting past Darren Heuston, to leave it just a one point game.

But again just like the opening quarter when Kickhams got close, Arravale responded. Eoghan Lonergan got in for his second while Caleb Molloy Hickey now getting on a bit more ball opened his account. Another Sean Cannon free kept Kickhams in touch but Arravale responded with two in a minute from Gavin O’Meara and Caleb Molloy Hickey and were able to respond to any Kickhams score. Arravale Rovers leading at half time 0-11 to 1-4.

Micheal Lowry and Conor Horgan both pointed on a low scoring resumption but again Rovers found a gear and three points in as many minutes from Caleb Molloy Hickey (2) and Niall Sharpe had them 0-15 to 1-5 ahead by the eleventh minute. Reuben Bourke and Conor Horgan kept Kickhams in touch but Arravale were looking the most likely winners with Micheal Lowry and Niall Sharpe controlling midfield. Kickhams found themselves in further trouble when Ben Loughman was black carded just before the water break. Arravale Rovers leading 0-16 to 1-7 at the water break. 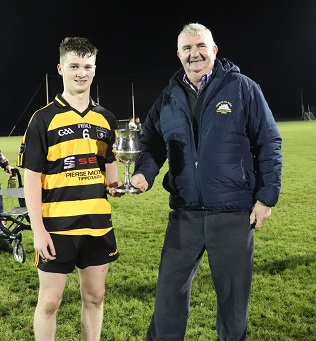 Five minutes after the resumption the game was effectively sealed in Arravale Rovers favour. Evan Hawkins now growing into the game saw his initial show saved by Jack Breen but buried the second chance to the net. Arravale now nine clear. Kickhams though continued to take the fight to Arravale with the running of Sean Cannon and Jamie Duncan in particular. Joseph O’Dwyer kicking a superb point in the closing stages which drew applause from the crowd present while Conor Horgan added to his tally. Gavin O’Meara and Caleb Molloy Hickey closed out the scoring for Arravale Rovers who ran out winners, 1-18 to 1-12.