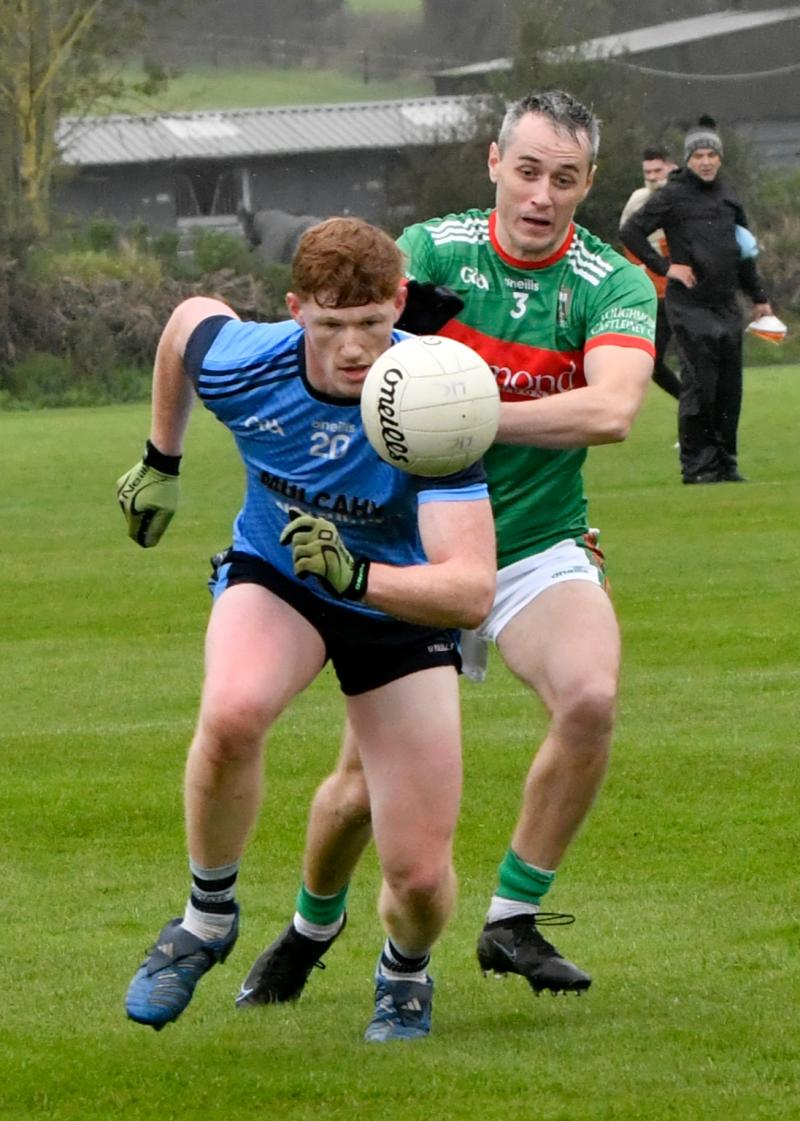 You just simply have to take your hats off once again to Loughmore/Castleiney who must be the best pound-for-pound dual club, not alone in county Tipperary, but in the whole of Ireland.

For the second weekend in-a-row the small Mid Tipperary parish looked to be on their way out of a championship, however, as is their DNA, they just couldn't accept defeat even when it was staring them in the face. If their hurlers’ comeback on Sunday last at Semple Stadium against Borris-Ileigh in the county semi-final was magnificent, their footballers snatching victory from Moyle Rovers at Golden was equally commendable.

Quite simply it just didn’t look possible with nine minutes to go. At that exact point Moyle Rovers’ Stephen Quirke had blasted low to the net to put his side 1-7 to 0-6 ahead in a low-scoring tight encounter, and most observers would have thought that his green flag would be enough to see the Monroe outfit through to the county decider. However, the now renowned never-say-die belief of the team in green and red once more came forth and somehow they turned the game around to win by a single point in the end.

Seven minutes from time a Conor Ryan free reduced the deficit to three points before Loughmore got the goal it seemed they would need to force their way back into the game. It came following another Conor Ryan free which fell short and when Rovers didn’t react fast enough to clear the danger, John McGrath took hold of the ball, swivelled and blasted high to the net to level the game at 1-7 each with five minutes plus stoppage time to play.

The attendance was then treated to an exciting 11 more minutes of up-and-down the field football in which both sides had good opportunities of a winning score. Eventually that winning point was to come five minutes into added time when Lorcan Egan proved to be the unlikely hero of the day. The tireless corner-back, epitomising everything about his club’s spirit, presented himself in an overlapping corner-forward’s position to take a pass from man of the match John McGrath. Egan then made ground along the end line and still with a bit to do fisted a huge point over the crossbar to seal a famous victory for Frankie McGrath’s side. 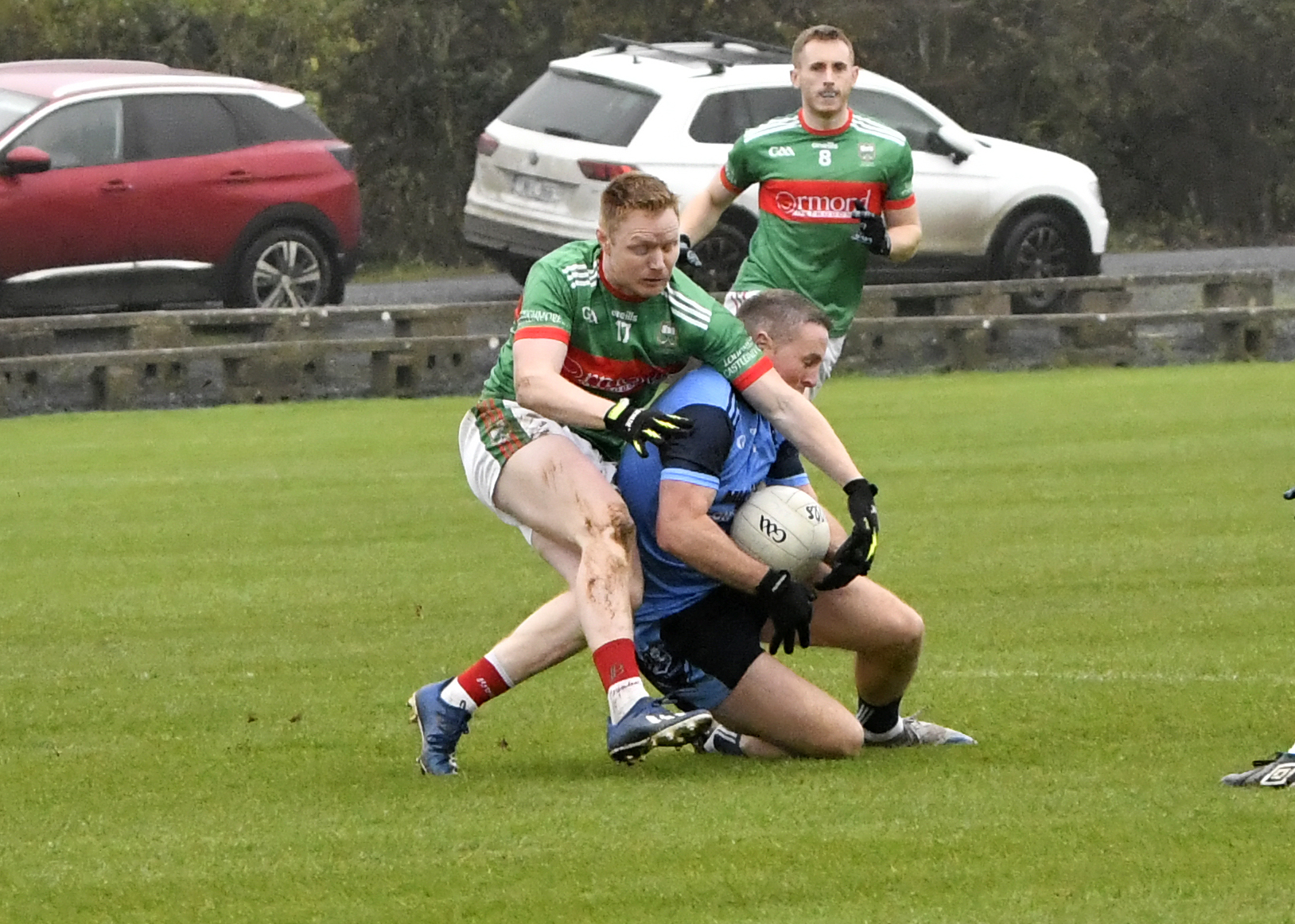 The win earns Loughmore/Castleiney a place in a second county final over the next fortnight, and most likely they will start as rank outsiders in both. They’ve been here before, they’ve won the double, and they’ve lost both finals also, but win or lose you simply cannot but admire the huge achievements this club perennially produce at the top table of senior hurling and senior football in Tipperary. It is heroic stuff really.

Moyle Rovers had the better start to this encounter and were two points clear inside two minutes with a point from Shane Foley followed by a Stephen Quirke free he had won himself.

Against a tight-marking Rovers defence, Loughmore had to wait until the 10th minute to get their first score, a free by Conor Ryan followed immediately, after a poor kick-out, by an equaliser from Liam McGrath to level the scores at 0-2 apiece.

A long pass played in by Cathal McKeown was taken in full flow and pointed by Riain Quigley to put Rovers back in front after 13 minutes. However, John Owens' side wouldn’t have been happy going to the first half water break only leading by a single point considering the possession they were enjoying and also kicking five poor wides in that first quarter.

Loughmore came more into the game in the second quarter and were level on 21 minutes when Conor Ryan converted a 40 metre free and they went on to lead for the first time in the game two minutes later when midfielder Liam Treacy worked very hard to take a deserved point.

After Peter Acheson was fouled Liam Boland put over a free to restore parity five minutes before half-time, and Rovers went to the half-time interval leading 0-5 to 0-4 when Riain Quigley converted a mark from almost on the sideline.

Four minutes into the second half John McGrath, who was everywhere all day long, had the sides level for the fourth time when making space for himself in a tight zone to point. But two minutes later a Stephen Quirke mark from a tight angle after he had fielded excellently put the Powerstown/Lisronagh side out in front once more. 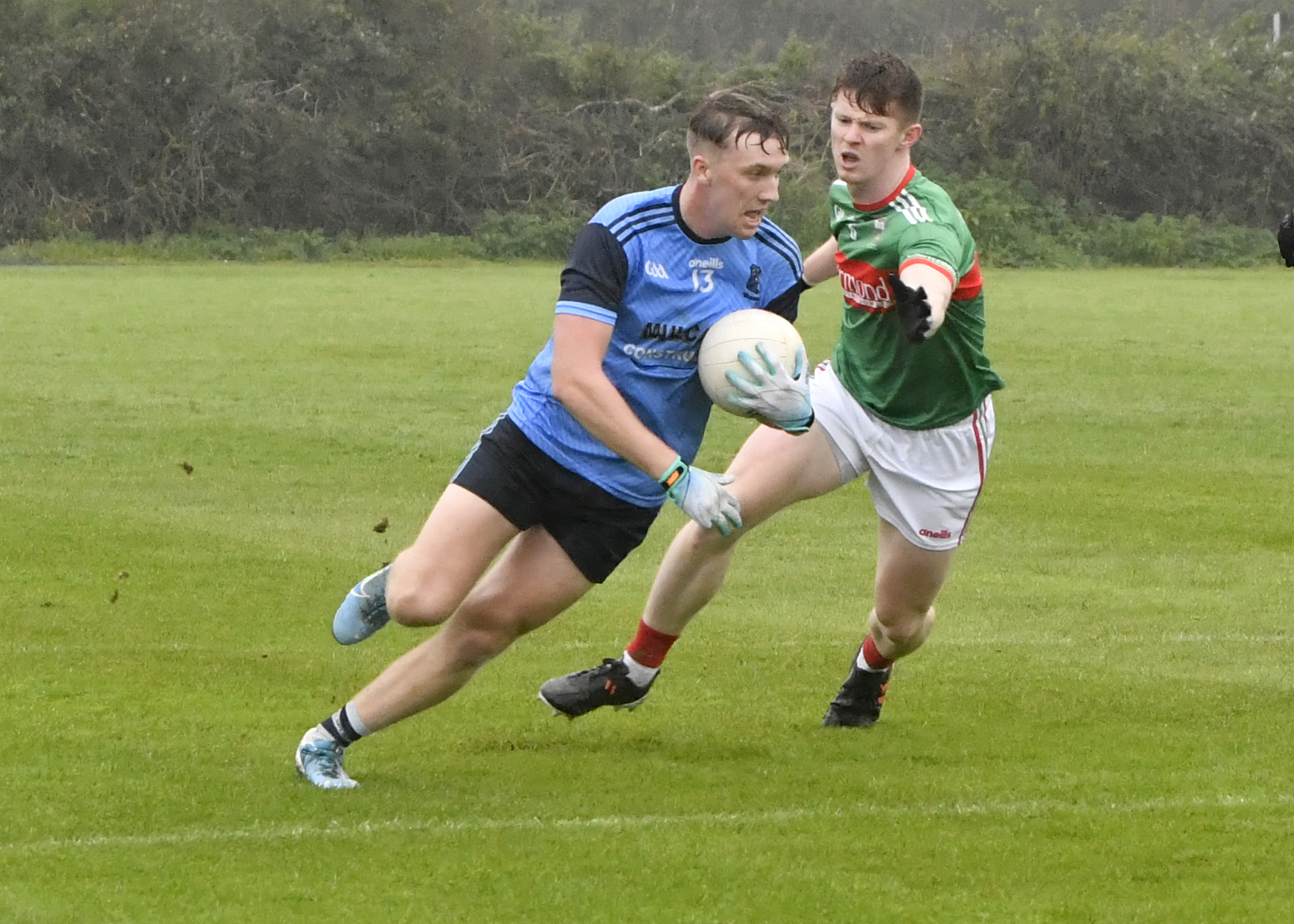 Moyle Rovers' Riain Quigley gets away from Loughmore's John Meagher.

It was almost another 10 minutes before we had the next score. In that time Rovers were absorbing a lot of pressure with their rearguard doing well and Jack Harney inspirational in the centre of it. Just before the second water break, former Tipperary captain Peter Acheson, home from Dubai to help the cause, stretched the lead to two for Rovers at 0-7 to 0-5.

A well-worked move from Loughmore linking captain Willie Eviston and Noel McGrath put Evan Sweeney in space and the second half substitute raised a white flag to put just the minimum between the sides after 50 minutes.

But Rovers got a huge boost nine minutes from time, when a Riain Quigley run at the Loughmore defence ended with Stephen Quirke blasting to the net. It looked good now for Moyle Rovers for a first final appearance since 2018, but you can never write off Loughmore/Castleiney as many have bitterly learned over the years.

Down the stretch with the game in the melting pot there were chances galore for glory, with Moyle Rovers missing opportunities presented to Liam Boland, Peter Acheson and Diarmuid Foley, and John McGrath, Conor Ryan and Noel McGrath spurning equally good chances for Loughmore.

But cometh the hour cometh Lorcan, and the Loughmore corner-back had the final say of the day with the match-winner right at the death before referee Seanie Peters signalled the end.

While a teak tough performance is always needed to stand up to a physical side like Loughmore, at times today Moyle Rovers didn't do themselves any favours. Over the hour they conceded 20 frees to Loughmore's nine, while Rovers also picked up five yellow cards along the way, and were lucky there wasn't a second yellow for one before half time.