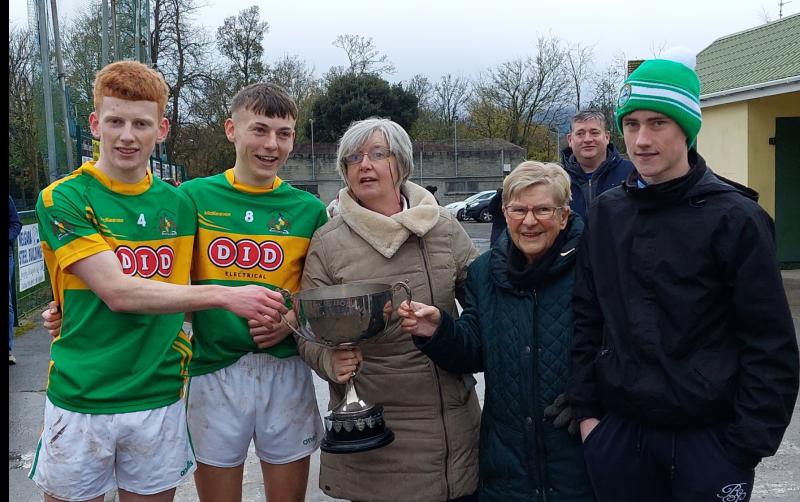 Clonmel Commercials joint captains Eoghan Walsh and Oisin Forristal accept the cup from representatives of the Boland family after they defeated Kilsheelan in the final played at Cahir this afternoon.

South Tipperary Under 17A Football Final

Clonmel Commercials proved too strong for Kilsheelan/Kilcash in the Coiste na nÓg South U17A Football Championship final at Cahir this afternoon (Sunday) winning comprehensively in the end on a scoreline of 1-19 to 0-9.

The sides were level at the end of the first quarter at 0-3 apiece, but from that stage onwards, perhaps with the exception of a few brief minutes at the start of the second half, the town side looked the more likely winners. At half-time they led by five points - Kilsheelan failing to score in the second quarter - and were six points clear by the time the game’s only goal arrived in the 46th minute, scored by Ruairí Leahy.

The final quarter was all one-way traffic with the Philly Ryan-managed Commercials dominant against a young Kilsheelan side whose heads and hearts had dropped just a little. By the time of Luke Foran’s full-time whistle, there was no denying Commercials the silverware for this competition (formerly the minor age group but now for under 17s and back under the auspices of Coiste na nÓg).

The first quarter was to be the most competitive of the four with a “very under-aged” Kilsheelan side - who will have all bar four eligible again next year - putting it up to Commercials.

Joe Higgins opened Commercials’ account in the second minute, and that lead was doubled after seven minutes by Cian Smith’s first free of the day, won by Cillian McNamara. However two quick points from play  from Kilsheelan’s Ruairí Kelly and Patrick Ormonde had it all square at 0-2 each after 13 minutes.

Patrick Ormonde then put over a free to give Kilsheelan the lead and they had a great chance of a goal in the 16th minute but Senan Butler’s effort was off target. That was to be the side’s only real goal chance for the day.

The teams went to the first half water break level  at 0-3 each when Cian Smith stroked over a free after a Kilsheelan player fouled the ball as he came out of defence.

Commercials began to open up more in the second quarter and started to get on top scoring five in a row without reply.

The game’s outstanding player Cian Smith kicked the first of his four points from play in the 20th minute for the lead for Commercials, stretched to two when Conor Parker converted a free won by Oisin Forristal’s run being illegally halted.

A sweet left-footed point from Cian Smith when he took on the responsibility himself against a hard-working Kilsheelan rearguard made it 0-6 to 0-3 in the 24th minute as the physically stronger town side began expressing themselves more.

Ruairí Leahy then found himself unmarked 30 metres out and seized the opportunity with a well-taken point. And when ‘man of the match’ Cian Smith was fouled Alex Creed temporarily took over the free-taking duty and ably bisected the uprights to send his side to the half-time break leading 0-8 to 0-3.

Inside 30 seconds of the restart Commercials took up from where they left off. Ben O’Dwyer who had come on just before the interval for the injured Conor Parker put in a shout for a start the next day with a point. The score was created by the endeavours of Oisin Forrestal, Cian Smith and Alex Creed in the build-up before O’Dwyer delivered the finish for a six points advantage.

Kilsheelan, who had beaten this Commercials side earlier in the competition, then enjoyed their best period of the game, scoring three points without reply to halve the deficit back to three. Two frees from Patrick Ormonde were followed by an excellent point by captain Oisin Lavin showing to win possession before turning to score in the 35th minute.

A quick break upfield by Commercials was rounded off with another point from Cian Smith, but Kilsheelan, with a strengthening breeze behind them, replied in the 39th minute with Eoin Barry finding Liam Freaney to score.

Kian O’Reilly who put in a particularly impressive second half then pointed from 30 metres for Commercials, quickly followed by another Smith free, won by the work of Darragh Landers who had just come on minutes earlier.

Commercials were beginning to cut through a tiring Kilsheelan defence that little bit easier as the game developed and Kian O’Reilly was unlucky to see his blaster at goal clip the top of the crossbar and go over. The signs were ominous.

A marked difference between the sides was undoubtedly the strength in depth of the Commercials bench and another sub introduced, Tadgh Sheehan, raised a white flag with a fine effort from 30 metres out shortly after being introduced.

There was but a brief respite for Kilsheelan with a well-deserved point for Harry Roche-Nagle's efforts in the 46th minute before the game’s only goal arrived. 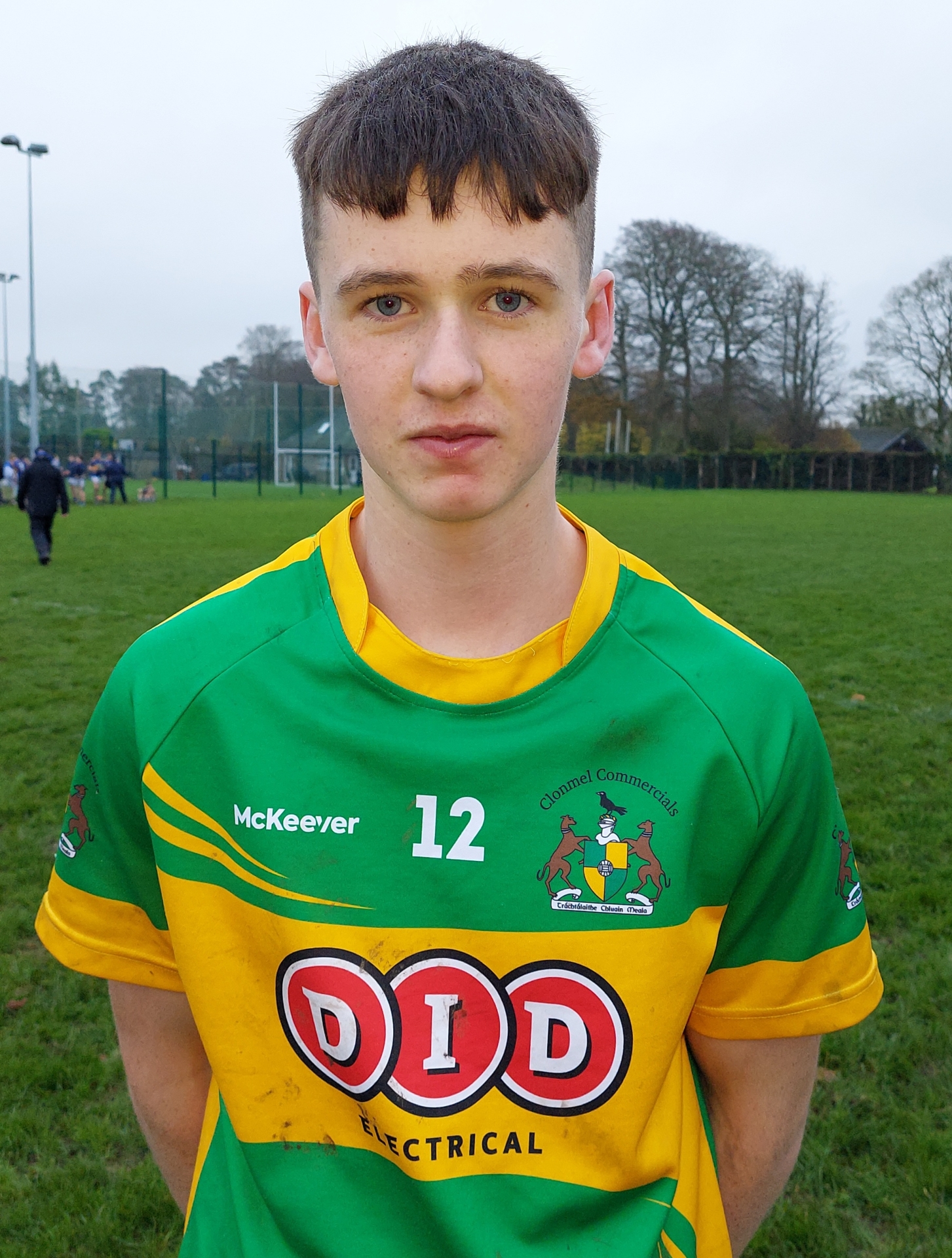 That move was started in the Commercials half-back line by a determined break by Thomas Charles, a late replacement for Darragh O’Connor who was injured in the warm-up. The possession was continued upfield via Alex Creed and Kian O’Reilly before Ruairí Leahy finished superbly with a rocket to the roof of the Kilsheelan net. Game over it seemed as the sides headed for the second half water-break at 1-14 to 0-8.

Down the stretch the traffic was pretty much relentless in the direction of Oisin O’Donoghue’s goal. Commercials added on five points without reply from Kian O’Reilly (two frees), Ruairí Leahy, Cian Smith and Ben O’Dwyer (after Leahy had again rattled the crossbar) before the last score of the day went to Kilsheelan’s Liam Freaney.

Both sides are still in the county competition with expected quarter-finals next weekend. Commercials will be hoping to improve in the quest for further silverware, while for Kilsheelan/Kilcash, after the disappointment of the day, will be looking forward to redeeming themselves and perhaps getting another tilt at the town side before the competition concludes.

For Commercials there were many excellent displays all over the pitch, none more so than from Cian Smith, ably assisted by Oisin Forristal, Kian O’Reilly, Alex Creed and Ruairi Leahy. In defence, when there was plenty of work to be done in the first half, Eoghan Walsh, Alex McSherry and Conor Guiry stood out.

For the young Kilsheelan side there were good and honest efforts from the Freaneys, Michael and Liam, Alex Hanrahan, Tommy O’Connor, Matthew and Harry Roche-Nagle, Ruairí Kelly, Patrick Ormonde and Senan Butler.