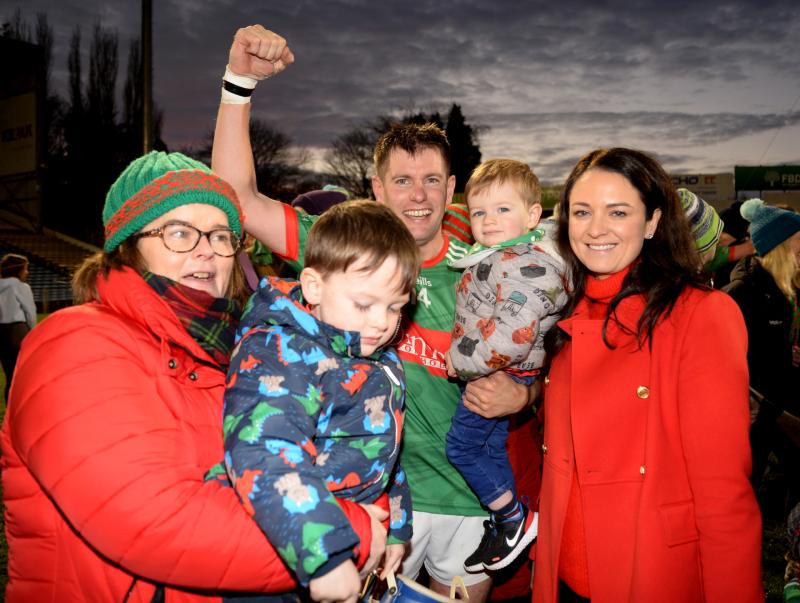 The tone of this game changed in three stunning minutes of the third quarter.

Sarsfields had enjoyed the better of the scoring exchanges in the first quarter to establish a three point lead – a lead they would maintain into the half time break 0-9 to 0-6.

But the writing had been on the wall – Loughmore Castleiney had endured a splurge-fest in the first half as they drove twelve wides into the Killinan End. They would hit just four wides in the second half – the same as Sarsfields into the same Town End in the first.

So, Loughmore Castleiney had been creating the chances and in reality, had they been taking them, Sars' would have been out of the picture by the break.

They had both missed a decent goal chance apiece – Michael Cahill for Sarsfields and Ed Connolly for Loughmore Castleiney, but it was the accuracy of Pa Burke which set the sides apart. The veteran enjoyed a fine outing in the drawn game and he turned in another great first half, hitting four points from play – two of them won by Denis Maher who was causing a lot of problems for Loughmore Castleiney. One of the keys to the victors turning the game in their favour was the taming of Maher who enjoyed far less opportunity to wreak havoc in the second half.

But, to those game altering three minutes. John McGrath started the ball rolling – who else? - with a fourth minute beauty. Evan Sweeney, just on as a sub, didn't take long to make an impact with a score, followed by a long range effort from John Meagher. The match was tied but the momentum had swung in favour of Loughmore Castleiney and when Brian McGrath bagged the goal three minutes after John had started the momentum shift, Sarsfields were in trouble.

The only saving grace from a Blues perspective was that they still had plenty of time to rescue the situation – Denis Maher's goal right at the second water break was a major shot in the arm to them, it coming off a Pa Burke pass.

So, the title was there for whoever wanted it – especially after David Corbett tied the game up just after the last quarter began.

To give Sarsfields their dues, they came back time and again as the finish line came into view. They did it in the drawn game and led right at the death before Loughmore Castleiney found a leveller. And, they did it in the replay with Maher's goal, and then Darragh Stakelum's goal in the 26th minute, which effectively cancelled the blast from Liam McGrath three minutes earlier.

But, there was to be no comeback after John McGrath pointed from a free from a tight angle under Ardán Úi Chuinneain in the 32nd minute. Sarsfields piled forward in search of an extra time forcing equaliser, but it would not come – Loughmore Castleiney pulled down the shutters and ensured that nobody could win clean possession in that last gasp pile-up which went on for quite some time.

Sarsfields did not get into stride for any decent period of time in this game – in the drawn game, the first quarter was their only opportunity to make hay. After that, Loughmore Castleiney brought the game into the trenches and conducted affairs on their terms. They tightened the screw; didn't give the Sarsfields players and inch; ensured that the game would be hurled in bunches; and then went and won the lions share of those rucks. There was plenty of dirty ball to be won on Sunday and Loughmore Castleiney won most of it – especially in their own backline.

Sarsfields had shoved in Billy McCarthy in the hope of making the ball stick in the half forward line. It worked to a degree, but not enough. And, they did not have enough players on song in that attack to win the game.

Loughmore Castleiney are the masters at winning tight games. Their 2013 county title was won by mining the same scoreline (1-17) against Eire Og Nenagh, and they won by the same margin as the 2021 final – one point. They won the '83 final against Borris-Ileigh, again after a replay, by 2-7 to 1-8. The exception to the tight game rule was their 2017 victory over Drom-Inch which they won by 0-22 to 0-13. This campaign alone, they have eked out victory in so many tight games that they know going down the final straight that they have an edge.

So, Sarsfields did not need this game to be a tight affair if they were to win it – they needed it to be like the mid final which was a runaway victory secured by midway through the second half.

Ahead of the county final, Loughmore Castleiney Manager Frankie McGrath rightly said that the mid final counted for nothing – how right he was. Loughmore Castleiney had Liam McGrath and Ciaran Connolly back in action, and what a difference they made to their set-up. Connolly was unrivalled for energy and drive in the replay, whereas Liam McGrath bagged the second goal, won great ball and was a general nuisance for the Sars' defence which, over the hour, coughed up a lot of possession.

So, Loughmore Castleiney are the champions and have repeated the feat of 2013 by winning the double – the enormity of that achievement must be cast against the backdrop of the devastation of last years double defeat. To journey back to the finals in the first place speaks volumes of the character of the dressingroom; to win them is simply stunning.

Thurles Sarsfields must learn from their neighbours and have to acquire the art of hurling in the trenches. Games are won not in straight lines, turning around cones, hurling snappy, fast ball from hand to hand – fantasy hurling if you like; they are won in coping with the chaos, the carnage and the madness of championship fare; the rough and tumble; the physicality; the body on the line; the overcoming of adversity; and the ability to dictate the terms of engagement.

Sars' didn't win those battles, but they certainly tried. That they failed is testimony to the champions who didn't give an inch and were in their faces from the throw in - they have the lethal cocktail of skill and application - that's why they won.
Hats off to Loughmore Castleiney.