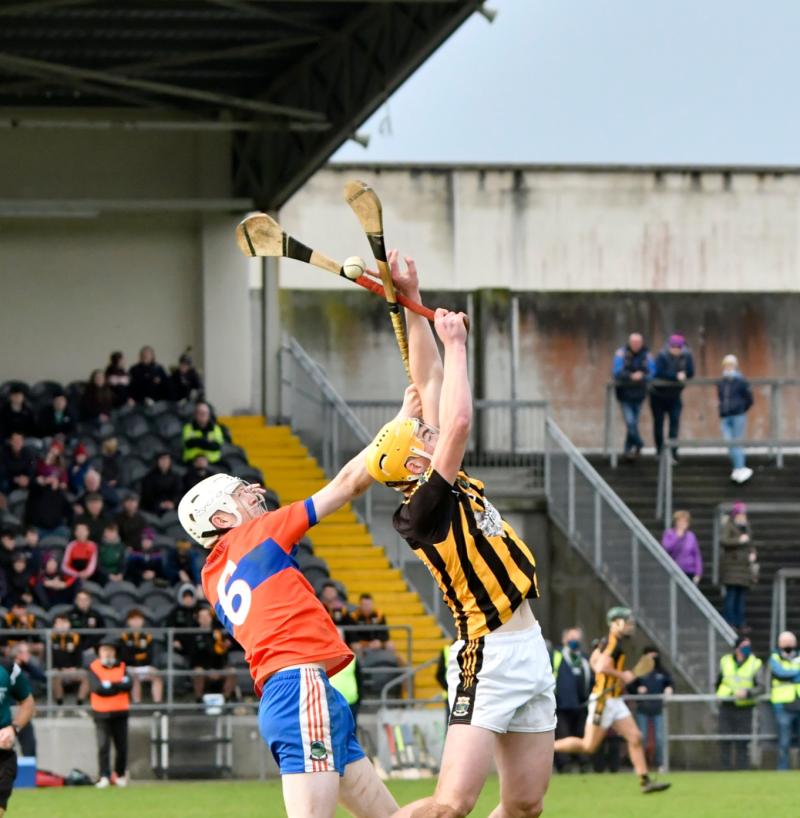 It took extra-time in Mallow to separate Skeheenarinky and Ogonelloe in a closely-contested Munster junior club hurling championship semi-final on Saturday.
In the end, the Tipperary side prevailed to record a three-point win and reach next month’s Munster final, which will played on January 8 or 9 against neighbours Ballygiblin from Cork, who had two points to spare over Caherline of Limerick (1-9 to 0-10) in the other semi-final on Sunday.
Skeheenarinky led from start to finish and were never behind on the day, and so were deserved winners.
However, Ogonelloe struck a goal and a point deep into second half injury time to bring them back from the dead and dramatically send the game to extra-time.
Five points from Tomás Vaughan in extra-time proved the difference for the winners, who defended resolutely to close the game out.
Playing with the breeze in the opening period, a point from Darragh Brennan and two Tomás Vaughan frees gave Skeheenarinky a three-point lead before a point from Ogonelloe wing back Peter English and a free from Gearoid Sheehy reduced the deficit to one by the tenth minute.
Three further points from play from Skeheenarinky from Mikey Maher, Conor Sweeney and Dean Finn extended the lead to four, before Gearoid Sheehy responded with a free just before the water break to leave it at 0-6 to 0-3.
In the 25th minute, Adrian English struck for Skeheen’s first goal to open a seven-point lead at 1-8 to 0-4.
However Ogonelloe ended the half better and reduced the deficit to five at the interval, with two frees from Gearoid Sheehy and a point from play from Barry Kiely. The score at half-time was 1-9 to 0-7 in favour of Skeheenarinky.
Ogonelloe’s upturn in fortunes continued after the break and they hit the first three points of the half to reduce Skeheen’s lead to two, before John O’Callaghan responded for the Tipp team with a well-taken goal in the 43rd minute, following a fine run and pass from Conor Sweeney.
When Tomás Vaughan landed a free, the lead was increased to six at the second water break on a scoreline of 2-10 to 0-10.
To Ogonelloe’s credit they ended the game the better and won the final quarter by 1-4 to 0-1, which culminated in a last-gasp goal from team captain Danny Cunnane in the sixth minute of injury time to send the game to two extra periods, when Skeehan’ proved the stronger.
Skeheenarinky are looking to become only the second Tipperary team to win this competition after Moyle Rovers in 2007, and are the first Tipperary side to reach the final since Ballybacon-Grange in 2017.
Skeheenarinky: Aidan Treacy, Seamus O’Callaghan, David Hyland, Eoin Morrissey, Fionan O’Sullivan, Riain O’Callaghan, Oisin Brennan, John O’Callaghan 1-0, Mikey Maher 0-1, Conor Sweeney 0-1, Noel Vaughan, Dean Finn 0-1, Adrian English 1-1, Tomás Vaughan 0-11 (8 frees), Darragh Brennan 0-1.
Subs: Kevin O’Mahony for Seamus O’Callaghan (41 minutes), John Martin for Mikey Maher (42 minutes), Harry English for Adrian English (54 minutes), John Ryan for Eoin Morrissey (60 minutes), Tommy Sweeney for Harry English (72 minutes) and Christy English for Fionán O’Sullivan (81 minutes).
Ogonelloe: Robert Dreelan, Liam Hart, John O’Brien, Adam Sheedy, Sean Kikkers, Colm Quinn 0-3 frees, Peter English 0-2, Barry Kiely 0-1, Colin Hart 0-1, Gearoid Sheedy 0-8 frees, Henry Vaughan, Danny Cunnane 1-0, Aaron Fitzgerald-Bradley 0-1, Cian Fitzgerald-Bradley, Adam Cunnane.
Subs: Rory Skelly (1-0) for Cian Fitzgerald Bradley (23 minutes), Cian Fitzgerald Bradley for Aaron Fitzgerald-Bradley (39 minutes), Mark Walsh for Adam Cunnane (51 minutes), Noah Sheedy for Peter English (58 minutes), Paul McGee for Henry Vaughan (59 minutes), Peter English for Paul McGee (60 minutes), Aaron Fitzgerald-Bradley for Barry Kiely (61 minutes), Henry Vaughan for Mark Walsh (70 minutes), Paul McGee for Henry Vaughan (75 minutes).
Referee: Eamonn Stapelton (Limerick).