Cashel lie in third position in Division 2A table 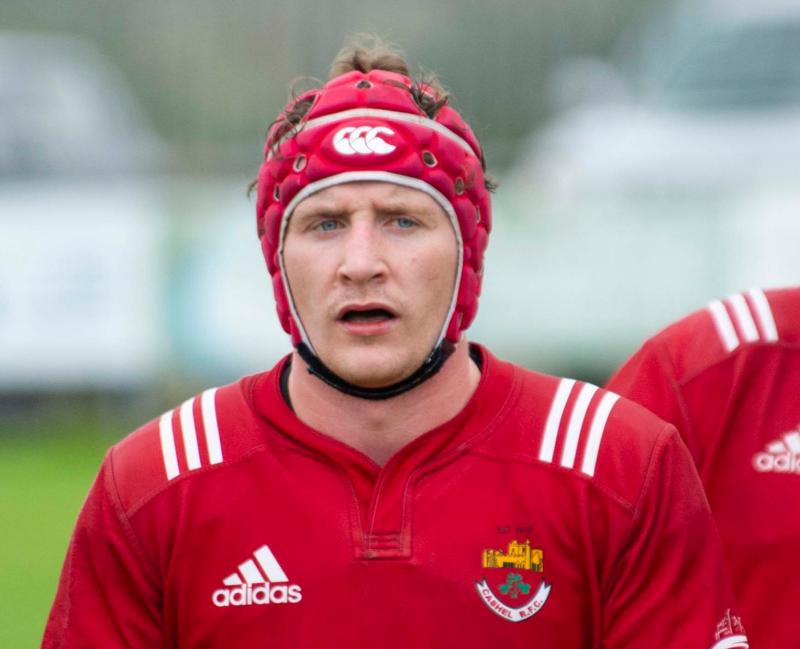 Many superlatives have been used over the past number of weeks to describe the performances of the Cashel rugby team in Division 2A of the All Ireland League.
Magnificent describes last Saturday’s performance at MU Barnhall, as they came back from 14 points to 7 down at half-time and 21 points to 10 down with twenty minutes left to turn the deficit into a four-try bonus point win against a strong home team.
Prior to the game Cashel were in fourth position, four points ahead of Barnhall, which made it a battle to stay in the top four. MU Barnhall, the home club of the great Heineken Cup player and Irish international Trevor Brennan, have an association with Maynooth University, hence the MU in their club title.
This was the fifth meeting of the teams and the win gave Cashel their fourth win. The game was played in damp conditions, with a wind blowing across the field that didn’t favour either side. After his heroics of the previous week, Ed Leamy took a rest and into the team came Aidan O’Connor, who turned in an outstanding performance.

Cashel made the early running and were making progress to the try line on three minutes but were penalised for holding on.
Nine minutes into the game Barnhall set up a maul on the Cashel 22. Cashel were penalised for an infringment and received a yellow card. Barnhall kicked the penalty to the corner, set up a maul and were over the line for what looked like a certain try.
Out of nowhere came Niall Fitzgerald with a crunching tackle to force a knock on.
After eighteen minutes a high tackle earned Cashel another yellow card and the penalty count began to mount up. Down to thirteen men, it was all hands to the pump but they could not hold out a Barnhall maul, which resulted in a converted try.
It took Cashel 27 minutes to register their first score. Going through the phases, they brought play to the Barnhall five metre line. The pressure told on the home team, who collapsed the maul and Cashel were awarded a penalty try to level the game.
Six minutes later Cashel were on the attack again. Unfortunately a stray pass was intercepted and Barnhall were in under the posts for a converted try. It was a lucky break for them and kept them ahead 14 points to 7 at half- time. Cashel could not understand how they had 65 per cent of the possesion but were in arrears, had eight penalties against them and only two awarded to them and they also had two yellow cards.
Five minutes into the second half Cashel won a Barnhall lineout and brought play to the ten metre line, where they were awarded a penalty that Steven McMahon converted to narrow the gap.
Then a handing error on 55 minutes gave Barnhall a scrum on the 22. They went through the phases and forced their way over for another converted try to put them 21 points to 10 ahead.
Cashel were now in deep trouble but they continued to work hard and stick to the game plan. As the clock drifted into the last quarter Ciaran Ryan broke away from a maul and barged over for a try, which Steven McMahon converted. The Cashel pack at this stake had won back control of the game with Cathal Ryan, Niall Fitzgerald and Brendan Ryan on top in the front row. Richard Moran was carrying hard and along with Aidan Butler was powering through the tackles.
Richard Moran earned a very well-deserved man of the match award. Ciaran Ryan and Fearghail O’Donoghue were outstanding and very difficult to stop when in possession. The real star of the day however was Aidan O’Connor, who lorded it in the lineout and was in no way overawed as he made his first AIL start of the season.
Cashel took the lead with ten minutes left. They were powering to the line when Barnhall collapsed the maul and the referee awarded a penalty try.
With time ticking away Ciaran Ryan made another of his powerful runs bringing play to the 22. Barnhall were penalised and Cashel kicked to the corner. It was a wonderful attacking position but what unfolded almost cost Cashel the game. The lineout was lost and Barnhall ran from their own tryline. Their outhalf chipped the Cashel backs, followed up his kick and fed his winger on the halfway line. As the winger headed for the Cashel line with nobody in front of him Josh Pickering and Steven McMahon gave chase. Josh slowed him down and Steven put in the try-saving tackle. Richard Moran arrived on time to rob the ball at the breakdown and Cashel cleared their line.
Two penalties brought Cashel to the five metre line. A maul was set up and to ensure a try would be scored all fifteen Cashel players joined in to force the maul over the line for Michael Hickey to touch down. From a position where Barnhall were almost in for a four-try bonus point- winning try, Cashel changed the result in those last-gasp two minutes to take all five points and leave Barnhall without a point, which they deserved for their contribution to this excellent game.
We have now reached the halfway stage of the competition. Queens are way ahead on 40 points, with only one defeat - to Cashel. Ballymena are in second place on 31 points 2 points ahead of Cashel in third position. Cashel have also beaten Ballymena.
Cashel’s next game is on January 14 when they entertain Barnhall in Spafield, as the second round of games commence in reverse order.
Cashel: C Ryan, N Fitzgerald, B Ryan, R Moran, A Butler, C Ryan, A O’Connor, F O’Donoghue, J Pickering, C Mullane, A Dunne, C Cashman, A McMahon, R Kingston, S McMahon, J Blair, L Shine, M Hickey, D O’Neill, H O’Donoghue.