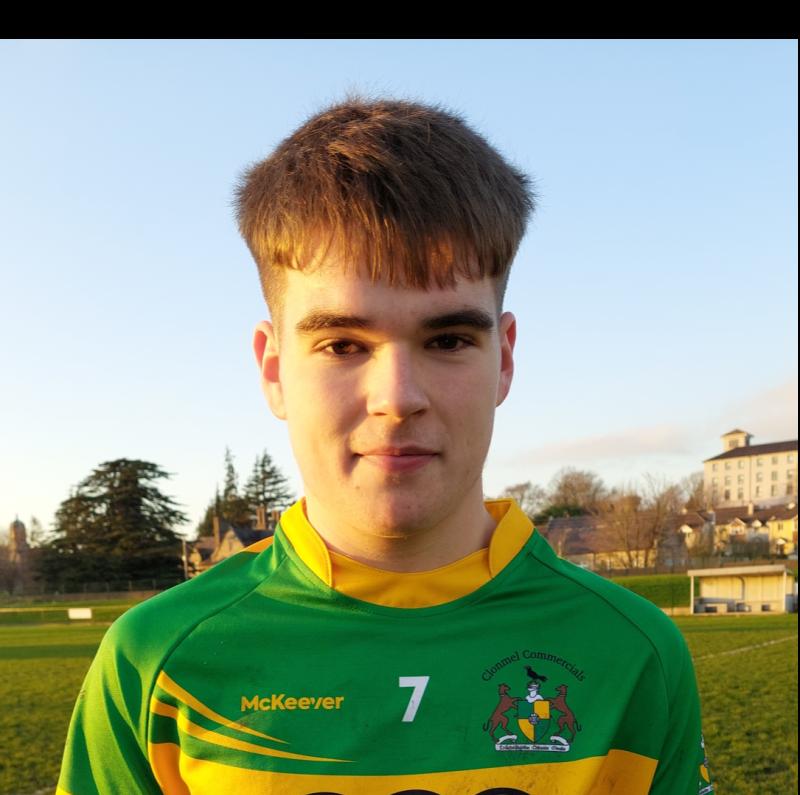 Evan Kiely scored the game's only goal in the sixth minute finishing in a good Clonmel Commercials move with a rocket to the roof of the net.

County Under 17A Football Semi-Final

Clonmel Commercials’ minors booked themselves a place in this year’s County Under 17A Football Championship final by virtue of a six points victory over JK Brackens at Clonmel Sportsfield this afternoon (Saturday).

It was a blistering opening by the Commercials in which they scored 1-3 without reply inside the first seven minutes that was to ultimately decide this game - coincidentally the same margin they had at the final whistle. The game’s only goal came as early as the sixth minute when a move linking Cillian McNamara and Tadgh Sheehan set up wing-back Evan Kiely who finished superbly with a rocket high into the net.

Commercials should have had a goal two minutes earlier when Ben O’Dwyer’s shot was deflected over for a point, and they doubled that positive start in the fifth minute with a point by wing-forward Kian O’Reilly to lead 0-2 to 0-0.

Following the goal for a brief period one sensed that with the advantage of their home pitch, the Philly Ryan managed Clonmel side might run riot, especially when Cian Smith added to Kiely’s goal to make it 1-3 to no score in the seventh minute.

Brackens eventually got themselves on the scoreboard with an excellent point off the outside of the boot by Brian Quinn after eight minutes, replied to almost immediately by Ben O’Dwyer’s second point of the day a minute later.

The Templemore lads, who were finally beginning to settle, went to the first half water break trailing 1-4 to 0-2 after Jamie Ormond cut in from the left to score a nice point into the town end in the 12th minute.

Immediately on the resumption Commercials had a further goal chance but Cillian McNamara’s effort was well saved by Tom Bourke. A minute later they did stretch their advantage when Adam Brannigan’s delivery was collected and pointed by Ruairí Leahy to push the hosts six points clear once again. That however was to be Commercials’ only score of the entire second quarter.

Brackens’ wing-back Michael Delaney was one of their best players all through and he began a flowing move from defence, helped on by Michael Cahill and Jamie Ormond, before Ned Walsh finished it with a point in the 21st minute.

And the Templemore boys finished the first half with a third point in-a-row when Brian Quinn put over a free after one of his fellow forwards was tugged at when about to shoot.

At just three points down at the interval, 1-5 to 0-5, having looked in trouble very early on, the Brackens were right back in it and with the breeze at their backs for the second half.

With just one point scored in the concluding 21 minutes of the opening half, Commercials came out for the second period in determined fashion and rectified that statistic within 40 seconds. Joe Higgins, Kian O’Reilly and Cian Smith were all involved in a move that Tadhg Sheehan finished well.

Two minutes after the resumption it looked like Commercials had their second goal when Joe Higgins' excellent run and pass was touched home by Ben O’Dwyer only for the referee to disallow for a square ball infringement.

JK Brackens who were beginning to threaten with their passing game through the middle had two stabs at goal in the 36th minute bravely defended by the Commercials backs before Ruairí Leahy punished that profligacy with his second point of the day to make it 1-7 to 0-5.

Again Brackens came upfield only to be twice again denied by a double save by Shane Ryan in the Clonmel goal, getting down low to save from Brian Quinn and gathering himself quickly to deny Ned Delaney with the rebound. This passage of play was under the advantage rule and with nothing positively accruing for Brackens, Brian Quinn had to be content with a pointed free.

In the 44th minute Cian Smith tapped over a free for Commercials, Brackens responding with a similar score this time off the ground by Joe Bourke into the Cantwell Street end.

However, very strangely the second half continued on without a water break before Brackens’ sub Cormac Bourke pointed 26 minutes after the second half had begun and only then did the referee  whistle for the ‘sos uisce.’ Commercials were three points clear but still both sides had it all to play for.

The final quarter was controlled better by Commercials, Kian O’Reilly unlucky not to goal immediately on the resumption when his effort came back off the upright with the goalkeeper well beaten.

Darragh Landers, who had come on in the second half, earned the free which Cian Smith converted to stretch the home side’s lead to four, and they finished off with the last two scores of the game, well-taken efforts by the freshly-introduced Alex Creed and Cian Smith.

Finally, 45 minutes after the second half had commenced the referee brought proceedings to an end and Commercials will go to the Christmas break with a county final against Durlas Og to look forward to in the first week of January.

It was an all-round team effort that pulled Commercials through on a day when they had to battle hard. The defence battled tirelessly throughout, Eoghan Walsh was pivotal at full-back, well supported by Adam Brannigan, Darragh O’Connor and Alex McSherry. In midfield Oisin Forristal and Tadhg Sheehan had their moments while Kian O’Reilly, Ruairí Leahy and Cian Smith were responsible for most of the scoring.

No doubt the fast start by Commercials cost Brackens dearly and aside from that seven minutes or so, they were a match for the Clonmel side in most departments.

Their defence had plenty to do all day and with captain James Ryan at centre-back, Sean Collier at full-back, and the excellent Michael Delaney at wing-back, they stood up well to the stern test.