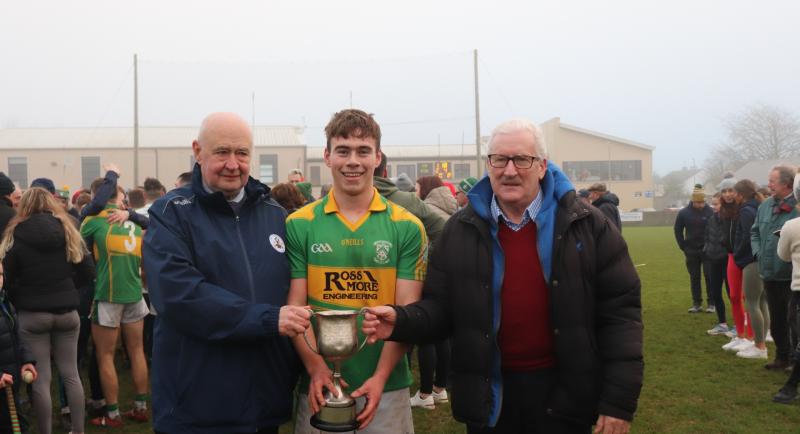 Chairman of the west board, Tom Hayes, presented the Bill Hayes Memorial Cup to Clonoulty Rossmore captain Tommy Ryan, in the presence of Jerry Ryan from Ollie’s Bar

Stephen Ferncombe’s pointed free deep in injury time sealed victory for Clonoulty Rossmore in an entertaining Ollie’s Bar west U21B hurling championship final in Golden on Sunday afternoon.
Kickhams looked to have taken control of the game with two second half goals but a determined Clonoulty Rossmore outfit refused to give in.
In a tense finish Jamie Davern goaled for Clonoulty Rossmore in the 54th minute to give them the advantage.
Conor Horgan levelled for Kickhams in injury time and the possibility of extra time loomed large. But in the last play of the game Clonoulty were awarded a free, with the resulting score from Stephen Ferncombe seeing them claim a third title in the grade.

The early morning fog lifted for the battle of the neighbours’ children, though there was always a threat of it returning.
The sides were meeting in the final for the first time, with Clonoulty having won their two previous final appearances, the most recent back in 1993, while Knockavilla Donaskeigh Kickhams had been beaten finalists in their only previous final appearance in 2018.
Kickhams justified their slight favourites tag in the early exchanges, opening up a four points to one lead by the sixth minute, Shane Farrell and Declan Ryan scoring from play with Conor Horgan pointed twice from placed balls. Stephen Ferncombe was on target for Clonoulty/Rossmore.
Stephen Browne and Jamie Duncan were going well for Kickhams in defence, with Shane Farrell getting onto a good bit of possession in the forwards.
Clonoulty, though, kept the defence tight, limiting Kickhams’ space. For the remainder of the half they outscored Kickhams by 0-10 to 0-2. Clonoulty were also winning the midfield battle, with Tommy Ryan and Aaron Kennedy now on top.
Kennedy opened his account with Clonoulty’s second from play while Stephen Ferncombe pointed two frees to tie the game. Just before the water break Stephen Ferncombe opted to go for goal from a close range free but his effort was blocked on the line, with the resulting 65 going wide. The sides were level at the first water break, 0-4 apiece.
The resumption saw the sides trade points. Kickhams went one up but each time Clonoulty drew level. When Conor Horgan pointed in the 21st minute it was Kickhams’ last score of the half.
Frees had a say over the course of the opening 30 minutes, with referee Richie O’Connor ensuring the handpass was executed properly, with errors punished. Jack Kennedy equalised before three pointed placed balls in-a-row from Stephen Ferncombe saw Clonoulty in the ascendancy for the first time.
Oisin Fryday and Jamie Davern completed the scoring, as Clonoulty retired at the break leading 0-11 to 0-6.
There was a frantic start to the second period. Jamie Duncan cut the lead to four with a point from play but Ferncombe showed his accuracy from placed balls yet again.
Kickhams hadn’t threatened the Clonoulty goal much up to now but in the blink of an eye they were level. Orrin Jones cut inside two Clonoulty defenders before sending the sliotar slow past Jason O’Dwyer and into the net.
This was followed by pointed frees from Conor Horgan and Jack Breen to level the game for a fifth time. In the 11th minute Kickhams retook the lead, Shane Farrell collecting possession unmarked before turning for goal and releasing Ben Ryan for goal number two.
Clonoulty were undeterred, however, and Robert Doyle was a central figure in keeping them in the game, as he broke the tackle on a number of occasions to clear his lines.
The sides went in level for a sixth time at the water break, with Stephen Ferncombe again on target from placed balls (Kickhams 2-9 Clonoulty 0-15).
Shane Farrell edged Kickhams in front with his second point but in this tit for tat game, Clonoulty were soon back in front. Goal chances had been limited but Jamie Davern found the back of the net. The story of the goal started back between the Clonoulty 21 and 45 yard lines. Twice Jack Ryan blocked down Shane Farrell, with the latter’s third pass intercepted by Stephen Ferncombe. Ferncombe in turn found Oisin Fryday, who set up Davern to goal to ensure a very tense finish, with the possibility of extra-time.
Fryday had a big impact on the latter stages of proceedings with some good fielding. Lorcan Carr cut the gap to one but Ferncombe responded at the other end, the lead chopping and changing between one and two before a Conor Horgan free in the 64th minute tied the game and now extra-time loomed large.
The game would have one more twist, however, when Tommy Ryan was fouled after gathering possession from a ruck. Up stepped Ferncombe to split the posts and with that came the long whistle, with Clonoulty Rossmore crowned champions.
Clonoulty Rossmore will now face the south champions in the county semi-final.
Scorers: Clonoulty/Rossmore: Stephen Ferncombe (0-13, 12 frees), Jamie Davern (1-2), Aaron Kennedy (0-1), Jack Kennedy (0-1), Oisin Fryday (0-1).
Knockavilla Donaskeigh Kickhams: Conor Horgan (0-7 frees), Orrin Jones (1-0), Ben Ryan (1-0), Shane Garrell (0-2), Declan Ryan (0-1), Reuben Bourke (0-1), Jamie Duncan (0-1), Jack Breen (0-1 free), Lorcan Carr (0-1).
Clonoulty/Rossmore: Jason O’Dwyer, Patrick Ryan Lanty, Jack Ryan Casey, Keelan Ryan, Danny Slattery, Robert Doyle, Jack Kennedy, Aaron Kennedy, Tommy Ryan, Stephen Ferncombe, Oisin Fryday, Sean Ryan, Cathal Ryan, Patrick Kennedy, Jamie Davern
Subs used: Aidan Slattery, Cormac Quirke.
Kickhams Donaskeigh Kickhams: Jack Breen, Cathal Carr, Ben Loughman, Ger O’Dwyer, Jack Ryan, Stephen Browne, Jamie Duncan, Conor Horgan, Eddie Daly, Reuben Bourke, Lorcan Carr, Shane Farrell, Alan Butler, Declan Ryan, Ben Ryan.
Subs used: Orrin Jones, Turlough Breen, Aidan Duggan.
Referee: Richie O’Connor (Arravale Rovers).