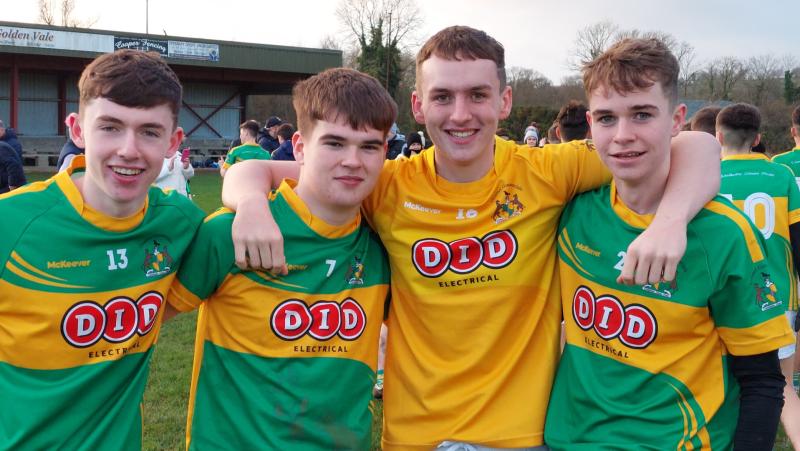 Some of the Commercials players celebrate after the county final win against Durlas Og at Dundrum today. On the left is Cian Smith who was top scorer with five points from play.

COUNTY UNDER 17 A FOOTBALL CHAMPIONSHIP FINAL

We may only be into the second day of 2022 but will we see a more exciting and entertaining game of Gaelic football over the remaining 363 days as the one witnessed in the County Tipperary Under 17 A final at Dundrum this afternoon (Sunday)?

Clonmel Commercials and Durlas Og served up a thrilling contest that needed extra-time to separate them, and while it was a huge pity there could only be one winner on the day, the Clonmel side just about deserved their victory in the end.

Seven minutes into the second half Philly Ryan’s side trailed by six points, 1-8 to 1-2, and looked in serious trouble against a strong physical Thurles side who, in all fairness, might have been even further ahead. But to their credit, Commercials stayed at it and slowly inched their way back into the game, point by point.

Following six points in-a-row, parity was restored by the 56th minute, only for Thurles to edge ahead again with what looked like a match-winning free in the 66th minute, but once more a never-say-die Clonmel side refused to capitulate.

Cometh the hour cometh the man and magnificently Commercials responded. An attack was stonewalled across the 45 metre line by a determined Durlas Og defence and it would take something special to force an equaliser from out there.

That something special came from Ruairi Leahy on whose long range do-or-die effort his side’s county final aspirations rested. In the few seconds between boot and destination the Commercials’ players and followers held their collective breath, before the ball descended  gloriously between the uprights and extra-time was secured.

Durlas Og did once again, for the final time, get ahead with an excellent Jock Fogarty point two minutes into extra-time. However, Commercials took over from there and the last three scores of a most memorable county final came from a Cian Smith free, another superb point from Ruairi Leahy, and the game’s final score, once more from Cian Smith.

The Michael Hogan Cup was deservedly heading back to the south division, and with it some much-needed encouragement for a club that had lost both the senior and under 21 county finals towards the end of 2021.

Pre-match, the form book suggested Commercials might prevail having beaten JK Brackens in the county semi-final; the Templemore side victors over Durlas Og in the Mid final. That line of thinking was dismissed early by Tony Lanigan’s side though. In the second minute Aidan Stakelum opened with a point and they were two ahead by the fifth minute when the influential Jock Fogarty pointed.

A solid Thurles defence led magnificently by Kieran Purcell were giving the Commercials forwards few opportunities and it took 12 minutes before they eventually raised a white flag when Conor Parker worked a one-two with a teammate before scoring.

Robbie Stapleton, who was a thorn in the Commercials side throughout the first half, played in a low pass to Aidan Butler who put Durlas Og 0-3 to 0-1 ahead after 13 minutes, and they were certainly going the better at this juncture.

Tragedy struck for them soon afterwards and that momentum was surrendered needlessly on the quarter hour mark when one of their defenders picked up the ball inside the small square leaving referee Fergal Horgan no choice but to award a penalty. Bravely Daniel Purcell parried Kian O’Reilly’s initial effort but the rebound was cooly despatched by O'Reilly to the net and Commercials, by their own admission, scarcely deserved to have the lead.

A converted Robbie Stapleton free for Durlas Og then sent the sides to the first half water break all square at 1-1 to 0-4.

The second quarter was notable from the point of view of Thurles having three goal opportunities that ultimately came to nothing. Aidan Butler’s shot was deflected out for a 45 by Commercials’ keeper Shane Ryan shortly after the resumption; a minute later Ryan did very well to smother a low shot from 20 metres that came through a forest of players; and just before half-time the promising young keeper saved bravely from Aidan Stakelum at the expense of another 45.

The Thurles side will no doubt reflect on those lost chances, while Commercials can thank their custodian for his crucial interventions.

The only scores that the second quarter did in fact produce were a well-taken point from 35 metres by Commercials’ Cian Smith, followed by two frees just before half-time from Robbie Stapleton, the second one particularly sweet from a tight angle, to put his side 0-6 to 1-2 up at the interval.

Twenty-five seconds into the second half Durlas Og created another goal opportunity with Aidan Butler setting up Aidan Stakelum but the latter’s goalbound shot agonisingly came back off the post with the keeper for once beaten. Perhaps it was an omen to suggest it wasn’t going to be Thurles’s day after all.

They quickly put that disappointment behind them and following another Robbie Stapleton free in the 31st minute, the goal their efforts richly deserved came five minutes into the second half.

A free from the left wing was delivered into the danger zone by Jock Fogarty and when it bobbled about in the air Aidan Butler seized the initiative, took possession before burying it into the net for a decisive boost to Durlas Og.

Two minutes later Aidan Stakelum got through and his rising shot just went over the crossbar much to the relief of Commercials who were now facing a 1-8 to 1-2 deficit. It would be a long road back, if they could find a road at all.

Perhaps Clonmel Commercials best on the day, wing-back Darragh O’Connor, started the revival with a point from 35 metres in the 41st minute. And he was involved in the creation of another point a minute later when feeding Ruairí Leahy who pointed well.

That six points deficit was halved in the 49th minute, when the Durlas Og defence who were beginning to look a little jittery stood off and allowed Cian Smith to point from 20 metres out.

Two further points followed in quick succession, both from Kian O’Reilly, the second a free won by Cian Smith’s probing run at the Durlas Og defence.

The momentum had swung towards the Clonmel side who in the space of 10 minutes had scored five points without reply, their opponents not helping their own cause by inviting them on instead of sticking to what they were doing best earlier.

Cian Smith’s third point of the afternoon levelled the game with four minutes to play and Commercials now looked the more likely winners after all.

But Durlas Og broke upfield deep into time added-on and when Robbie Stapleton was fouled he dusted himself down to kick what seemed the winning free from 40 metres, much to the delight of the Cathedral Town supporters.

But it took Ruairi Leahy, a young man with pure Tipperary GAA lineage, to rescue the day with his match-saving point that forced extra time, the Commercials' cheers stretching almost over to Boherlahan.

Finally in extra-time as bodies tired on a stamina sapping soft pitch, Commercials' belief in themselves came through eventually, when outscoring their opponents 0-3 to 0-1 for the win. Credit though to both of these under 17 sides who were magnificent in their efforts all day long in serving up a thriller. The honour of the first-ever Under 17 A title memorably went to Clonmel in the end, but only just. But if for nothing else they earned it for their mighty efforts when it looked like they were down and out, and they deserved it.

Overall this was a tremendous and tenacious all-round performance from the victors. Aside from the already mentioned heroics of Ryan, Leahy, Smith and O’Connor, others to play their parts on the day were Tadgh Sheehan who was an engine throughout, Adam Brannigan who defended the edge of the square and who soldiered on with a shoulder injury, Alex McSherry, Oisin Forristal, Evan Kiely, Joe Higgins and Cillian McNamara. While Alex Creed and Darragh Landers worked hard on their introductions.

Spare a thought also for the joint captain Eoghan Walsh who couldn’t attend today, along with teammates Ben O’Dwyer and Paraic Bond. They took had all played their parts along the way to county final success.

Durlas Og were best served by the likes of Kieran Purcell, Paul Noonan, Conor Wall, Jock Fogarty, Philly Hayes, Aidan Stakelum, Aidan Butler and Robbie Stapleton. They can take heart from contributing to a great county final that could easily have gone their way on another day.