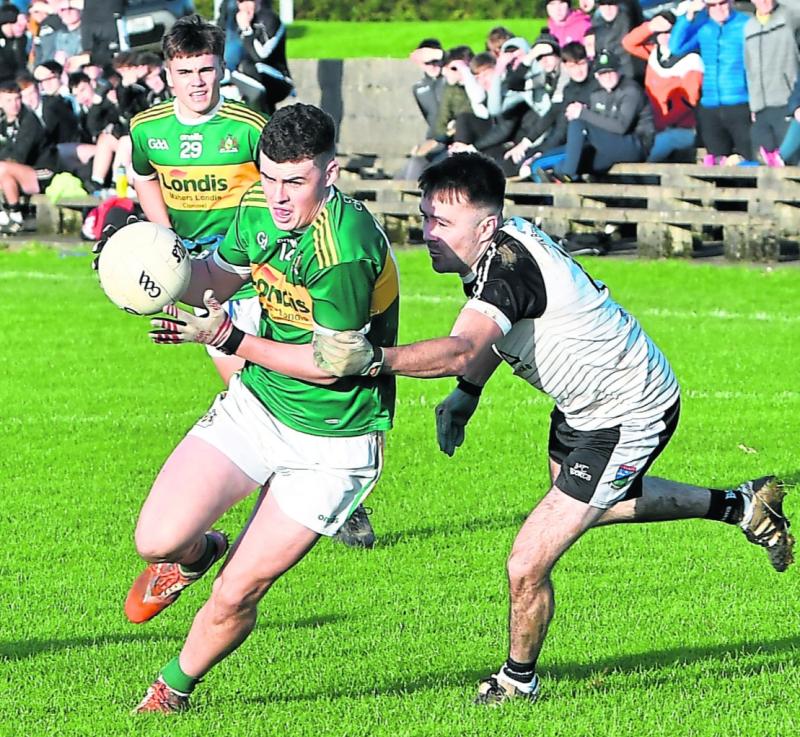 Clonmel Commercials Sean O'Connor who scored 1-7 for Tipperary today in their McGrath Cup win over Limerick at Rathkeale. (File photo)

Tipperary senior footballers got both the year and their McGrath Cup campaign off to a morale-boosting winning start at Rathkeale this afternoon overcoming the hosts by the minimum at the end of an experimental yet entertaining encounter.

The victory came late for David Power’s side who had to produce the last four scores of the day, coming from 0-14 to 1-8 behind to win, courtesy of two added-time points from Jack Kennedy - the JK Brackens Jack, that is, who had just come on as a 53rd minute debutant.

While the final score is never the be-all and end-all of McGrath Cup encounters, the win, nonetheless, will be a boost to Tipperary as they face Kerry on Wednesday night next in Dr Morris Park, Thurles. The performance is generally more important in these early-season duels, and overall Tipp will be well satisfied with what they came up with today from the 26 players who crossed the white line - the permitted 11 subs all getting an opportunity, albeit of different durations, to play their part.

Conditions were difficult for football all through, the game played on a softish surface in a constant light drizzle. But to their credit, both sets of mainly developmental sides, served up another tight Tipperary v Limerick contest, with never more than a kick of a ball between them all through.

Only five of Tipperary’s championship side from last July started - Evan Comerford, Shane O’Connell, Jimmy Feehan, Colm O'Shaughnessy and Conal Kennedy (Bill Maher was later introduced) while the starting team showed four late changes from that selected on Friday with Jack Harney, Niall Heffernan, Martin Kehoe and Mikey O’Shea absent for different reasons. Senior debuts were the order of the day, Ciaran Cannon and Leon Kennedy two who started but many more first-timers were added as the subs mounted over the 70 minutes.

Two early Sean O’Connor frees had Tipp well settled in the first 10 minutes before Limerick replied with two from play inside a minute from Darragh Ranahan and Tony McCarthy to leave it all square after 13 minutes.

A good move up the left wing started by Leon Kennedy and continued by Luke Boland brought about Tipp’s third point when O’Connor pointed the resultant free. But almost immediately the Shannonsiders were level again this time Tony McCarthy finishing off a flowing move up the centre of the field.

Tipp had edged back in front by the first water break, 0-4 to 0-3, courtesy of Sean O’Connor’s fourth free of the day.

When play resumed the home side enjoyed a spell of dominance and produced the next three points unanswered, from midfielder Josh Ryan, Peter Nash and a free from Hugh Bourke after a swift counter-attack coming when a Tipperary forward was forced into a turnover by good defending.

Trailing by two, Tipperary needed to get going again and it was a powerful run by Luke Boland that brought about the game’s only goal. The Moyle Rovers man’s run was stopped illegally but playing the advantage rule the loose ball was worked quickly through a few pairs of hands before Sean O’Connor was at the edge of the square to shove home a waist high pass. The goal certainly came against the run of play, but there was positivity in the composure shown by the Tipperary forwards when the opportunity presented itself.

Tipp soon edged two ahead on 31 minutes with a well-taken point from 35 metres from Shane Foley from the outside of the boot, again the spade work done by his clubmate Boland.

Two Limerick points between then and the interval, both from placed balls, a free from Peter Nash and a “somewhat contentious” 45 by Josh Ryan, made it all square at the half-time whistle, 1-5 to 0-8.

Ninety seconds into the second period Conor Ryan kicked Tipperary to the front once again but the sides were levelled for the fifth time in the 41st minute after Liam O’Sullivan’s run resulted in a Hugh Bourke converted free.

Aherlow's Mark Russell who worked his socks off all day then kicked a rousing point from 35 metres, and Tipperary’s advantage was doubled to two when Sean O’Connor sent over a free in the 44th minute coming from a good move that brought a foul on Eanna McBride.

Limerick instantly responded with a James Naughton point and they were back on level terms when Oola’s Josh Ryan kicked another free in the 51st minute.

A crucial moment came just before the second water break. For once Limerick weaved a way through the Tipperary defence and when Hugh Bourke played a low ball across the square to Josh Ryan it seemed he had to goal. Impressively, Michael O’Reilly who had come on in the second half for Evan Comerford, somehow denied Limerick, sending the sides to the second half water break still locked together, 1-8 to 0-11.

Subs were going in and out for both sides like Lanigan’s Ball at this stage, and Limerick looked to be finishing the stronger when two further frees from Josh Ryan, indicative of the pressure on the Tipp rearguard, sent them two clear. When Cillian Fahey put them three ahead with a fisted point, nine minutes from time, they certainly looked hosed in the continuous rain if not entirely home just yet.

Sean O’Connor kicked his first point from play in the 68th minute and just before the fourth official signalled an extra three minutes of play, the Commercials man pointed his sixth free of the afternoon to leave just two points between the sides.

Three subs were introduced in a flash at that moment for Tipp in an effort to save the day, but it was a substitute introduced a few minutes earlier, JK Brackens’ Jack Kennedy, who was to prove the hero of the day. Operating at top of the right, he twice found himself on the end of Tipp moves and with unerring accuracy nailed both. He levelled the game for the seventh time in the 72nd minute and when a further chance presented itself two minutes later he crowned his debut by sending the winner inside the far upright much to the delight of the Tipperary camp.