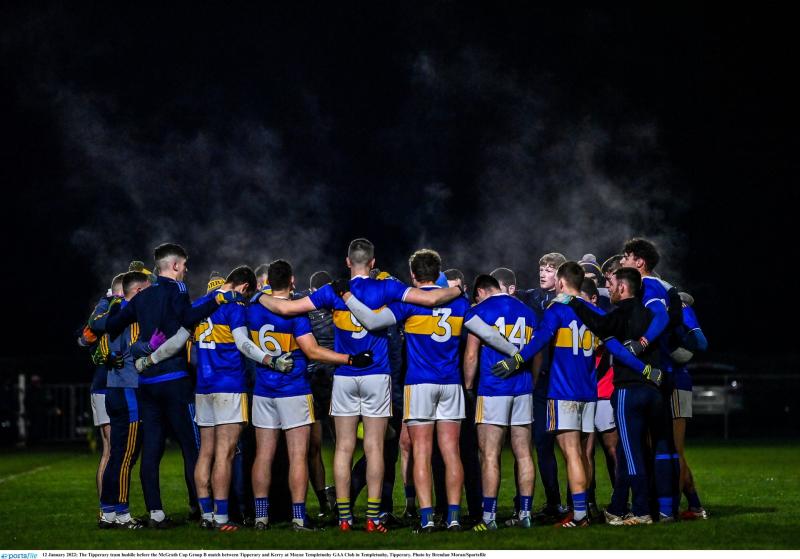 The game was played at a cold Templetuohy

The gulf in class between the top-flight teams and those in the lower echelons of football was strikingly highlighted at Templetuohy on Wed last as a rampant Kerry side romped home the most emphatic of winners over Tipperary in the semi-final of the McGrath Cup Munster senior football competition.

At full strength, Tipperary would have found it hard to live with the pace, intensity, and movement of the Kerry team but with a very experimental side sampling competition at this level, Tipperary were well out of their depth. However, manager David Power rejected any suggestion that this defeat was a major setback to his plans to win promotion from division four of the National football league which kicks off on January 30th against Waterford.

The Kilsheelan-Kilcash man said afterwards – When I saw the strength the of the Kerry line-out I knew we were going to be under a lot of pressure. I could not believe how strong a side Kerry fielded for this game. This was a division one team with ten or twelve of their likely first choices facing a division four team. I would have preferred not to be facing a division one side at this stage but you just have to take what comes your way.

He added – I am not being flippant when I say that this was not a setback. Our younger players now know the level we have to get to if we are to compete with the stronger counties. We got a good lot out of the two games in this competition with the guts of forty players getting game time. Our win over Limerick as more important to us in terms of our league outing against Waterford at the end of the month.

As a contest this was a non-event. From the word go Kerry dominated, going at Tipperary in waves and with speed and purpose and by the first water break they had eight points on the board without reply from Tipp.

Things improved slightly in the second quarter but Kerry still outpointed the Premier boys to be 0-12 to 0-2 in front at half-time. A pointed free by goalkeeper Michael O Reilly and a point from play by Conor Sweeney just at half-time were the Tipperary response to the Kerry barrage.

Kerry were still rampant after the break, reaching the second water break with a 0-18 to 0-4 advantage and two minutes after resuming Paudie Clifford signed off on his own fine performance with the Kerry goal after yet another bout of slick inter-changing by the Kerry attack. The final whistle could not come too quickly for Tipperary as the manager emptied his subs bench, using all eleven players. The final score of the game fell to Tipp’s Conor Sweeney who pointed a free.

So now Tipp’s focus turns to the National Football League and the opening round against Waterford. David Power will be hoping to have a much stronger fifteen lining out then and that his charges will have benefitted from the McGrath Cup outings. It was not a night that made reputations but the endeavour of Jimmy Feehan, Jordan Moloney, Shane Foley, Bill Maher, Stephen Quirke and Eanna McBride was admirable.