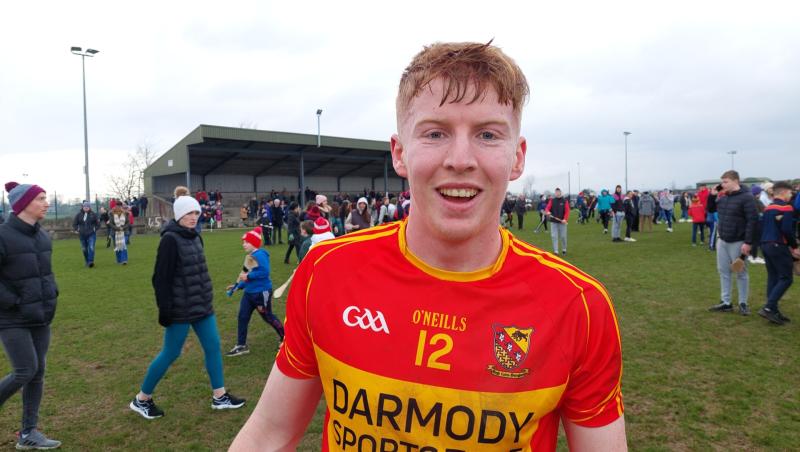 Moycarkey/Borris are Tipperary under 21 ‘A’ hurling champions for the first time ever following a closely contested and fiercely-fought final played before a big crowd at Golden this afternoon (Saturday).

The Mid Tipperary side, who were never headed over the hour, held off the challenge of a brave CJ Kickhams outfit who apart from a brief few minutes towards the end of the first half matched the winners in every department. But it was that spell between the 23rd minute and half-time that Moycarkey stole a march in edging four clear - four placed balls all converted by the Shelly brothers, Kyle and Rhys, which sent the Mid champions to the break leading 0-8 to 0-4.

Mullinahone re-emerged for the second half more determined than ever and had four of first five points to throw the gauntlet down once more to Moycarkey. Significantly though they could never level and at the three quarters stage the Red and Yellow jerseys managed to keep a two points advantage at 0-11 to 0-9.

Again after the second half water break Sean O’Meara’s side came to within a single point and with 10 minutes to go it was anyone’s game. But the Littleton/Two-Mile-Borris/ Moycarkey parishioners finished the stronger, roused by a magnificent sideline cut from Jack Morrissey, and another from play by centre-forward Max Hackett to claim a deserved victory in the end by three points.

It was an honest man-to-man contest all through with defences on top with neither goalkeeper forced into any real save of significance over the 60 minutes.

The first two scores of the day went Moycarkey’s way from midfielders Thurles Harty Cup man Stephen Walsh and Jack Fallon, but it was all square by the ninth minute following frees from Mikey O’Shea and Conor Whelan for the CJK.

Kyle Shelly’s opening free of the day edged Moycarkey ahead again but in the run-up to the first half water break Mullinahone left a few scores behind them, with balls dropped short into the Moycarkey keeper and a free that might have been converted sent wide. The Mid side led 0-3 to 0-2 at that first ‘sos uisce.’

Max Hackett doubled his side’s lead with a point off his left almost in the corner but clear opportunities for both sets of forwards were few and far between with excellent dogged defending by both units.

Two Mullinahone points in quick succession from Mikey O’Shea, a free and an effort from 50 metres, made it 0-4 apiece after 22 minutes. The remainder of the first half scoring went to Moycarkey though - three Kyle Shelly points (a 65 and two frees), followed by a monster of a free from inside his own half by goalkeeper and captain Rhys Shelly just before the half-time whistle sent the John Kelly managed Midmen to the break leading 0-8 to 0-4.

Early second half pressure yielded two further frees for Mullinahone, taken by Conor Whelan and Mikey O’Shea, before Darren Flood responded with a huge point from inside his own half for Moycarkey. Flood, named at corner-forward, operated as a sweeper for the most part, and put in a serious shift in securing his side’s victory.

Mullinahone captain Martin Kehoe responded with an excellent score from the sideline and when corner-forward Eoin O’Dwyer finished off a fine move with a point off the stick it was back to just a single point game after eight minutes of the second period Moycarkey 0-9 to 0-8 up.

The Shelly brothers with another free apiece widened the gap to three before Conor Whelan with a 65 brought the third quarter to a conclusion with Moycarkey tenaciously hanging on at 0-11 to 0-9 to the good.

Conor Whelan with his fourth placed ball of the day in the 50th minute kept the Mullinahone hopes of a first county win at this grade since 1989 alive. However, it wasn’t to be, with Moycarkey determined to get their hands on the Jimmy Doyle Cup for a first time ever. The piece of skill demonstrated by Jack Morrissey in cutting over his sideline ball for a point nine minutes from time would have greatly pleased the Thurles Sarsfields maestro after whom the silverware on offer was named.

Another free from Kyle Shelly, his sixth of the afternoon, and a point from play by Max Hackett - Mullinahone may have felt they could have been awarded a free out - made it a four points game, before Mikey O’Shea tagged on another free to leave just a puck of the ball in it after 56 minutes.

However the last four minutes of normal time and three minutes of added time, produced no further scoring, and referee Alan Tierney’s final blast saw a surge of delight and a sigh of relief from the Moycarkey/Borris followers and a first-ever county under 21 success.

The club will have great hopes now for the future with this team who, by and large, have remained unbeaten since their under 12 days and perhaps that barren spell without a county senior title - going back to the two won in 1982 and 1984 - might be brought to an end in the coming years.

This county final was a tight battling game all through with scoring opportunities at a premium and 16 of the 25 scores coming from placed balls - 17 if you include Jack Morrissey’s sideline cut. Tight defending counted most.

For Moycarkey/Borris Peter Melbourne at full-back, Bill Maher, sweeper Darren Flood and the half-back line of Cathal Corcoran, Tom Ryan and Rory Darmody were very solid. Stephen Walsh and Jack Fallon at midfield were busy all through while upfront Max Hackett and another Thurles CBS Harty Cup player Joe Maher had their moments too.

For a gallant Mullinahone there was much to admire in the performances of the likes of Cillian White, Daire O’Brien at full-back, Conor Whelan and Riain O’Halloran in defending. In midfield Martin Kehoe and Conor O’Brien gave no ground. In the forwards Mikey O’Shea, Shane Morris and Eoin O’Dwyer tried their very best.