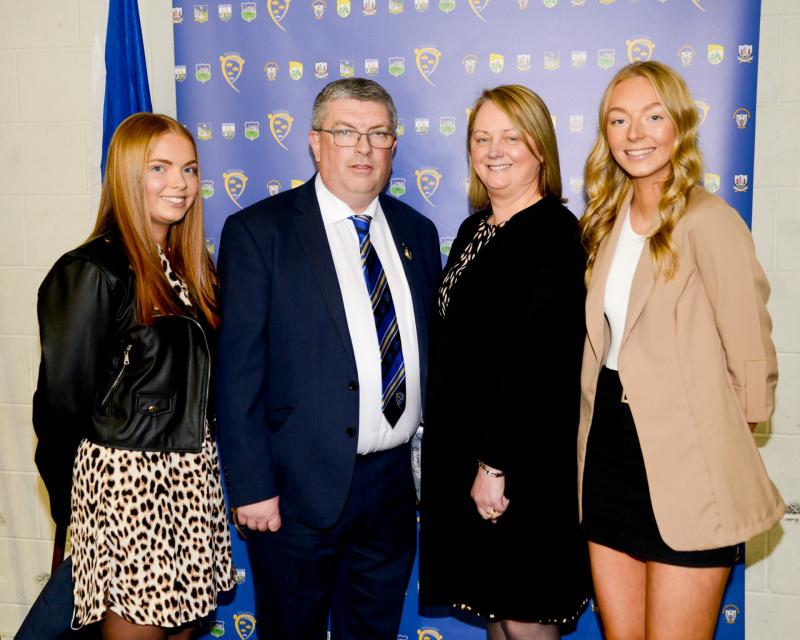 The Templederry man was elected at The Dome, Semple Stadium and told delegates the favours the Green Proposal for the proposed new football championship format

Templederry Kenyons clubman and former PRO of the Tipperary County GAA Board, Ger Ryan, was unanimously elected Cathaoirleach of the Munster Council at the AGM in The Dome, Semple Stadium at the weekend.

Following in a very distinguished line of Tipperary men to hold the office, Ger, who was very involved in the Tipperary Supporters Club for many years as well as holding a number of other key administrative positions , has been Vice Chairman of the council for the last term before taking over from Limerick's Liam Lenihan.

Ger, who is living in Moyne Templetuohy was joined at Convention by his wife Maria and daughters Dearbhla and Orlaith on what was a very proud day for all the family.

Convention was attended by GAA President Larry McCarthy and he listened to the new Chairman stating that it is a good time to reflect on the role as a provincial council and how best they can fulfil that role and support the counties of Munster.

“I believe that Provincial Councils play a significant role in CLG. They are best positioned to provide support, services, resources and advice to the counties and clubs in their geographic areas but to do this effectively it is essential to have the strategies, plans and capabilities in place to fulfil their responsibilities and obligations. 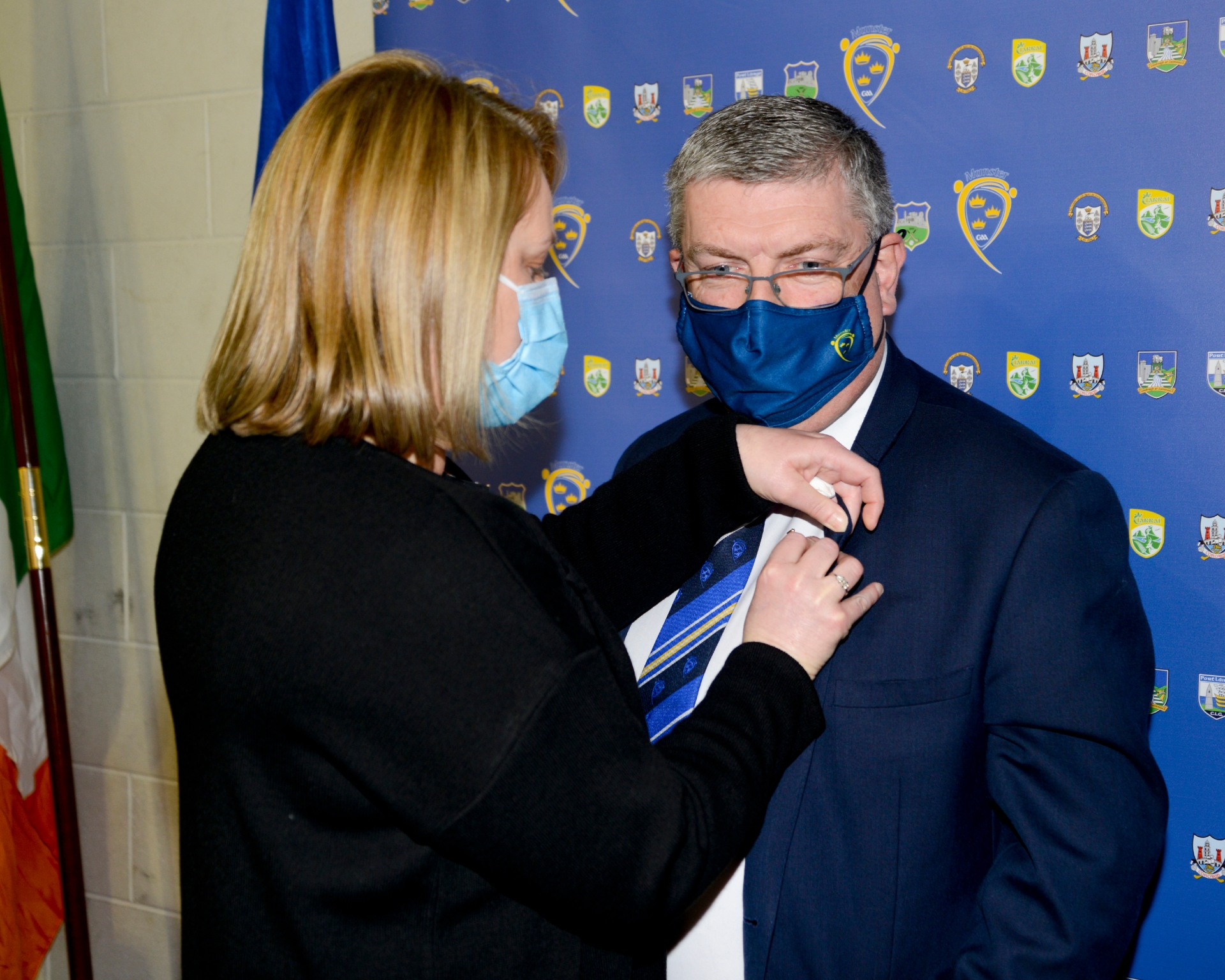 Above: Ger Ryan's wife Maria places the Chairman's medal on his lapel following his election as Chairman of the Munster GAA Council.

“ We have commenced the process of preparing a development plan for Comhairle na Mumhan and I look forward to working with my fellow officers and council members to complete it in the coming months.

“We need to be clear on the role and priorities of the Council. A key focus area for us as mentioned by the Rúnaí in his report is to look at how we at provincial level can provide enhanced services and support to counties and clubs on matters such as general administration and governance, finance, commercial matters and games development. We need to listen to, and understand, the needs of our volunteers, full-time employees, clubs and counties and make sure our activities are aligned with those needs as well as being aligned with national CLG strategy.

“The response to the pandemic reminded us of the very important role our clubs play in their communities and in a time of great upheaval and change, we need to support our clubs in every way to remain focal points for sporting and cultural activities in their local communities.

“It is also vitally important that we remain focused on ensuring our players have a meaningful programme of games and I want to compliment the counties on the good work being done in this regard. Also in relation to supporting clubs, I hope we will be able to reinstate the club development grant scheme this year,” he said.

Streaming of games has become a major element of GAA life since the pandemic and Ger Ryan offered their view that it is something which should be developed and expanded as time goes on.

“ There used to be a view that broadcasting of these games had a negative impact on attendances. However, I think the last 2 years have shown that we can increase the audience for all our games through the effective use of streaming.

“I believe that we need to continue to stream games even when we can return to full attendances. The challenge is to do it in a manner that delivers good quality and reliability and makes financial sense at county, provincial and national level. I believe it presents a great opportunity for Cumann Luthchleas Gael to develop an overall structure that will enable streaming to become mainstream, reliable and a great way for people who can’t attend games to enjoy them live,” he said.

The new chairman also revealed a plan to establish a working group to look at physical development of facilities to cope with the changing natue of games.

“One of CLG’s great assets is that its clubs and counties have invested in having their own property for playing our games. However, it is also an area for which we require significant future planning. Changes in demographics mean that we will have many different needs in future. We need to have engagement with local authorities and input to their development plans. We need to identify our likely property needs.

“We also need to ensure that we can fund and maintain our existing properties whether they be large stadia or small club facilities.

“Floodlighting has become an increasingly important requirement for games as well as for coaching and training. Centres of excellence are also of critical importance. I propose to establish a work group to look at all of these matters with a view to ensuring Comhairle na Mumhan has an effective strategy in these areas, can provide better support to counties and has a clear strategic basis for providing funding,” he said.

He also had a word for referees and stewards: “Our stewards play a major role in staging our games and we are very fortunate to have a dedicated group of stewards throughout the province and I am very grateful to them. We will need to look at stewarding to ensure that we will have enough stewards in the years ahead.

“I want to echo the Rúnaí’s commitment in his report to referee recruitment and development. We all know the importance of our referees and I want to thank them for the great effort and commitment they make to achieving the highest standards.
“We will need to look at new ways to recruit and develop referees if we are to avoid a serious shortfall so this will be a key focus area over the next couple of years. It is a tall order but one thing we must work harder to do is to ensure greater respect for referees, that is a key step in attracting new people to refereeing and maintaining high standards,” he said.

The football championship proposals were addressed by the new chairman of the Munster Council, Ger Ryan, as he spoke to delegates at the Munster Convention in The Dome, Semple Stadium on Saturday.

And, he outlined his preference for the Green Proposal as he said:

“I want to thank the Uachtarán for the opportunity to serve on the taskforce which considered options for the football championship restructure following Special Congress.

“As you are all well aware, there are now 2 proposals to be put to Ard Chomhairle for consideration at its meeting on 22nd January. The Red Proposal is an improved version of Proposal B put to Special Congress and provides for a league-based championship with round robin provincial championships earlier in the season.

“The two proposals reflect the desire of Special Congress and the wider Association for change and provide a clear choice for counties. I would encourage all counties to give close consideration to both proposals and to bring their views to the Ard Chomhairle meeting on 22nd January.

“My personal preference is for the Green proposal which I believe provides change for the better while preserving what is good in our current structures.

“I look forward to a new structure being adopted and it would be a great to see consensus emerge around one proposal,” he said.