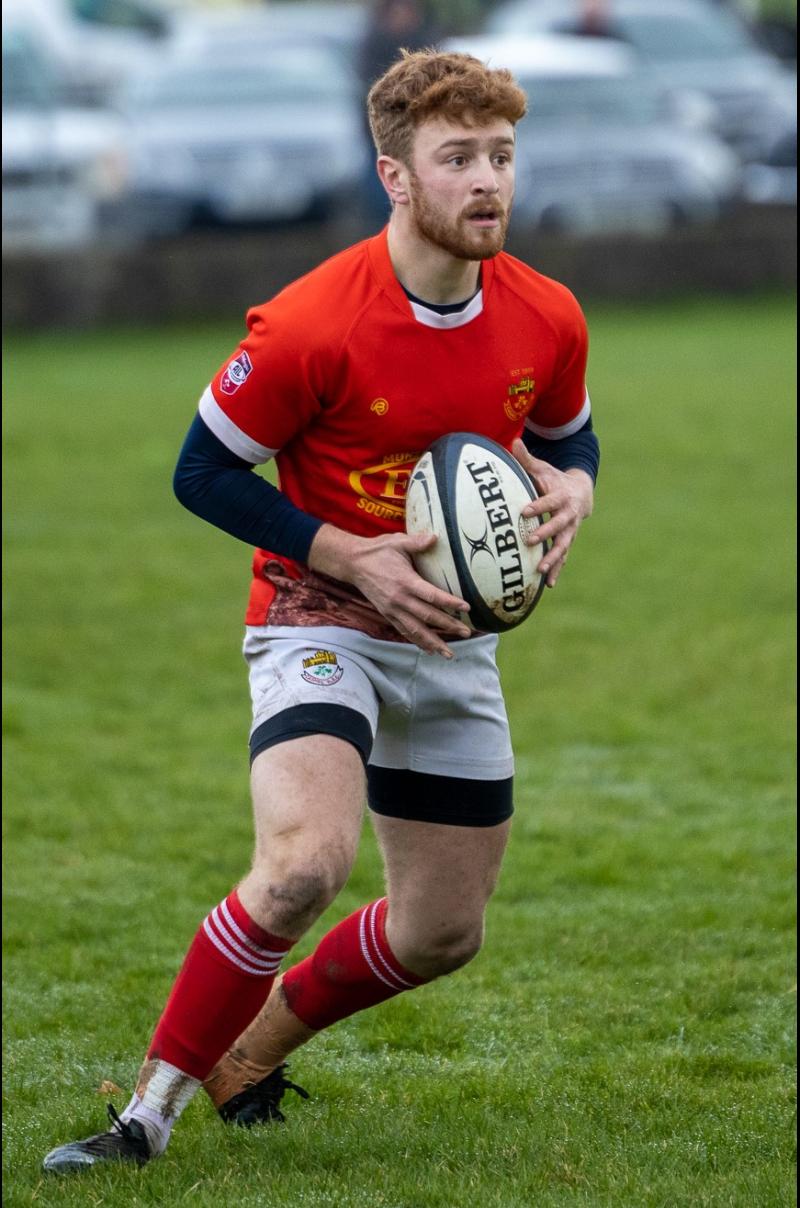 Josh Pickering was his usual busy self in Cashel's 36-24 win over Dolphin in Division 2A of the AIL at Musgrave Park on Saturday last.

ENERGIA ALL IRELAND LEAGUE DIVISION 2A

Round 11 of the All-Ireland League took Cashel to Musgrave Park, Cork on Saturday last.
There were fears of a Dolphin backlash, as they had suffered a heavy defeat at the hands of Nenagh the previous week and Cashel had come through a tough encounter with Barnhall. They also had home advantage on the excellent 4G artificial pitch that hosts some of Munster’s games in the United Rugby Championship.
In addition to the excellent quality of the pitch, the weather conditions were also perfect and the crowd was treated to an excellent rugby game that for much of the game looked like an easy victory for Cashel. But as they almost snatched defeat from the jaws of victory late in the game, the result was not settled until the final whistle of this nine-try encounter. Cashel were without captain Cathal Ryan due to injury but Brendan Ryan was fit to come back into the squad and take his place on the bench.
Due to the top of the ground conditions, the pace from the start was frantic, with Cashel on the front foot early on. Dolphin quickly came into the game and put pressure on the visitors’ defence, resulting in a penalty after eight minutes that put them ahead. It took Cashel 15 minutes to gain territory and when they did they went about their business in a determined way.
In the words of the great Young Munster and Ireland forward Tom Clifford, it was controlled fury and it was required, as they had to go through a good number of phases before Aidan Butler charged over for a try that Cian Mullane converted.
The pace did not drop at any stage in the first half as the scrums were evenly matched, though Cashel did gain the upper hand in this area later in the game. Once again both teams were willing to run the ball and this made it most entertaining for the faithful.
After 30 minutes it was still 7-3 in favour of Cashel, with play going from end to end with excellent passing and excellent tackling.

After 30 minutes Cashel won a penalty in the scrum on halfway. Dan O’Neill kicked to the corner, Cashel won the lineout, set up the maul and Ciaran Ryan crashed over for a try that Cian Mullane converted.
The forwards were now dominating for Cashel with Niall Fitzgerald, Richard Moran, Aidan Butler and Ciaran Ryan carrying with great effect, and James Ryan using all his experience at the breakdown to turn over ball. Johnny Blair was excellent in the scrum, with Fearghaill O’Donoghue and Aidan O’Connor excellent in the lineout.
A feature of the first half was the carrying of Ciaran Ryan. So effective was he in this area that a Cashel supporter commented that the Ryan twins were playing well, when in fact there was only one of them on the field.
Approaching half-time, Cashel were on top. Ciaran Ryan carried deep from his own half and set up the backs, who put the ball through the hands for Alan McMahon to score an excellent try in the corner. Cian Mullane hit the post with the conversion attempt. The half-time score was Dolphin 3 Cashel 19.
Early in the second half Dolphin got into a good attacking position but James Ryan tidied up a loose ball to relieve the pressure. Cashel were now on top and playing with confidence. Josh Pickering was his usual busy self and Dan O’Neill was pulling the strings at out half. Conor Cashman was carrying well and Alan McMahon was attacking at every opportunity.
Wingers Richard Kingston and Adam Dunne were good in defence but were not getting much go- forward ball.
Cian Mullane was very assured at full back. He got Cashel into good attacking positions with clever kicks from inside his own half, his kicks at goal were good and he was solid under the high ball.
Fifteen minutes into the second half Cashel kicked a penalty to the corner. The lineout maul was used to great effect and Brendan Ryan scored Cashel’s fourth try. Cian Mullane converted from the sideline.
He was on hand again five minutes later when the forwards set up a movement for the backs, which he finished with a fifth try for Cashel. He hit the post with the conversion attempt.
With 12 minutes left to play Cashel had what looked like an unassailable lead of 31 points to3. Something stirred deep in the Dolphin minds and they began to play with pride and passion. A convereted try narrowed the gap.
Five minutes later they ran from halfway and were in again for a converted try. Suddenly Cashel looked vulnerable and Dolphin began to hope as they piled on the pressure to score another converted try.
Now Cashel’s lead was down to seven points with two minutes left. Alan McMahon came to Cashel’s rescue as he sliced through the defence to score a try. The gravitational pull of a possible try bonus point and a losing bonus point kept Dolphin going right to the end. However Cashel held out for a victory that looked certain with 20 minutes to go but very doubtful with two minutes left.
The win keeps Cashel in third position and they will be well tested this Saturday at 2.30pm at Spafield when they take on Old Crescent, who are coming off the back of two good wins.
A good turnout of supporters would be an advantage.
Cashel team (1-20) C Ryan, N Fitzgerald, J Blair, R Moran, A Butler, A O’Connor, J Ryan, F O’Donoghue, J Pickering, D O’Neill, A Dunne, C Cashman, A McMahon, R Kingston, C Mullane, B Ryan, M Kelly, L Shine, M Hickey, J O’Dwyer.

OTHER FIXTURES
Cashel’s seconds XV took on UCC on Sunday last at Spafield and in an entertaining Munster Senior League game lost 19- 12.
Cashel’s under 16s played Shannon in the Munster League in Limerick and though on top for most of the game lost by 10-5 after Shannon scored a try in the last minute.
Our U13s beat Clonmel by 24-12.
Cashel/Thurles U18s travelled to Youghal and were beaten by 27-12 in the Munster League. Overall it was a busy weekend of rugby.