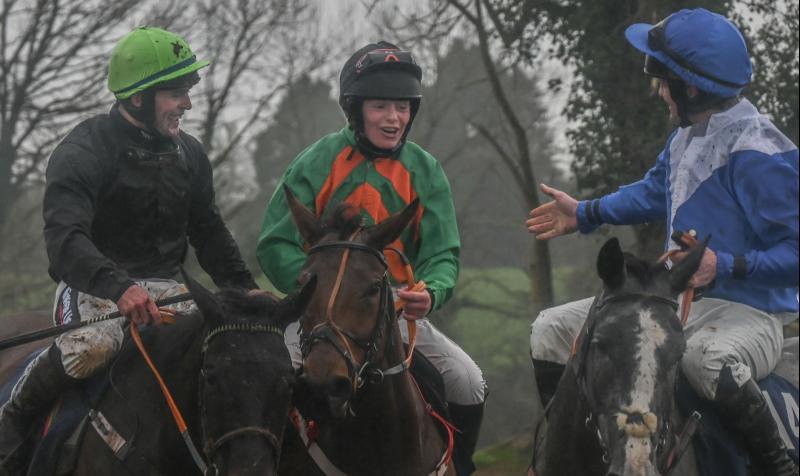 Clonmel woman Liz Lalor (centre) is congratulated by her fellow jockeys at Comea, near Kilfeacle having broken the Irish point-to-point record

The point-to-point horse racing course at Comea, Tipperary may be only a few hundred miles, and a quick jaunt across the Irish Sea, from Cheltenham and Aintree. However, in reality it’s light years away from those famous English racecourses, which were the scene of Rachael Blackmore’s historic successes of just under a year ago, triumphs that made headlines all over the world for the Killenaule woman.
For all that, though, the humble course at Comea, near Kilfeacle, was recently the setting for another major achievement by another Tipperary female jockey, Liz Lalor, when she broke the Irish record for the most point-to-point wins by a female jockey.
During what is the veteran rider’s final year in the saddle, she will bow out in style at the conclusion of the point-to-point season in May, having broken Helen Bryce-Smith’s longstanding record when guiding the 6/1 shot Read to Return to victory at Comea a week-and-a-half ago to record her 110th victory.
“I was delighted to break the record,” she says.
“It has stood for so long and with Covid it was so prolonged waiting for the chance to equal it and then break it.”
It has been a long road for the Clonmel woman on her journey to rewriting Irish horse racing’s history books. Since riding her first winner in Kinsale all of 23 years ago she has overcome many obstacles, including one that was much more difficult and demanding than any she will ever have encountered on a racecourse.
Nine years ago Liz had the misfortune to suffer a bleed on the brain following a crashing fall at a point-to- point meeting at Athlacca in County Limerick.
She was sidelined from May to December, finally returning to the saddle at Leopardstown some six months after the fall, having failed the concussion test to resume riding on a few occasions.
It was an injury that has slightly affected her memory to this day.
She says that she missed riding while laid up and was greatly relieved to have recovered sufficiently to return.
Her subsequent success is a tribute therefore not only to her skill and durability as a jockey, but to her mental and physical fortitude to have first survived and then conquered such a serious injury.
Liz’s victory on the David Christie-owned On The Sod at Moig South in County Limerick towards the end of last November saw her equal Helen Bryce-Smith’s all-time tally of 109 winners by a female jockey. That achievement saw her rewarded with an Annerville award for 2021 by the Tipperary United Sports Panel, which will be presented at the panel’s annual awards ceremony at the Talbot Hotel Clonmel (formerly the Park Hotel) on Saturday night May 7. 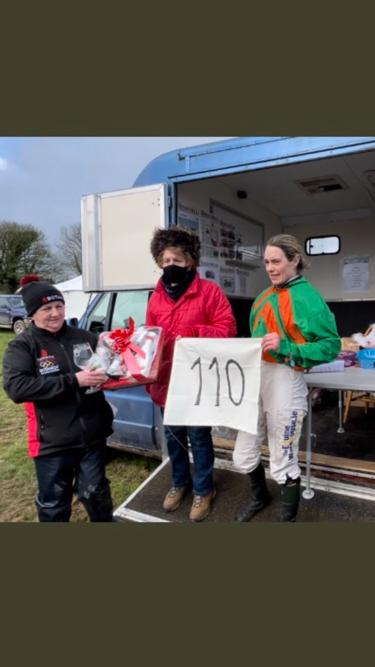 Above: Liz Lalor's record-breaking achievement is celebrated at the point-to-point meeting in Comea, Tipperary

Her record-breaking success on Read to Return was a family affair, as the horse is owned by her partner Tom Keating. The couple live at Grange, near Clonmel, with their three-year-old daughter Alex.
The daughter of Anne and Dick Lalor from Lisronagh, Liz is often seen carrying the distinctive blue and red silks of her father Richard, colours that are synonymous with the Carrigeen prefix, such as the two-time champion mare Carrigeen Acebo.
Just four days after her historic win at Comea, Liz was back in action and sporting those blue and red colours of her father at Clonmel Races last Thursday, when she steered 250/1 chance Carrigeen Konini into third place out of 18 runners in the Surehaul Race Day Mares Maiden Hurdle.
“All our horses seem to be in good form at the moment,” she says.
She has won the ladies point-to-point title nine times, having first lifted the title when sharing it with Jennifer Pugh in 2009.
The 2018/19 campaign was particularly memorable, when she enjoyed her 100th career winner following the birth of her daughter Alex.
She was back on the racecourse just five weeks after Alex’s arrival when riding at the Nenagh point-to-point. In her role as a trainer she saddled her first double on the track at Clonmel in 2007.
Among the many messages of congratulations she received following her historic win on Read to Return was a card from the previous record holder Helen Bryce-Smith.
“That was really nice,” says Liz.
She says that because she has been “so busy with point-to-points, racehorses and foals” there hasn’t been time to celebrate her historic success.
However she is planning a party for the summer, when she will finally call time on a riding career that began when she was just 16.