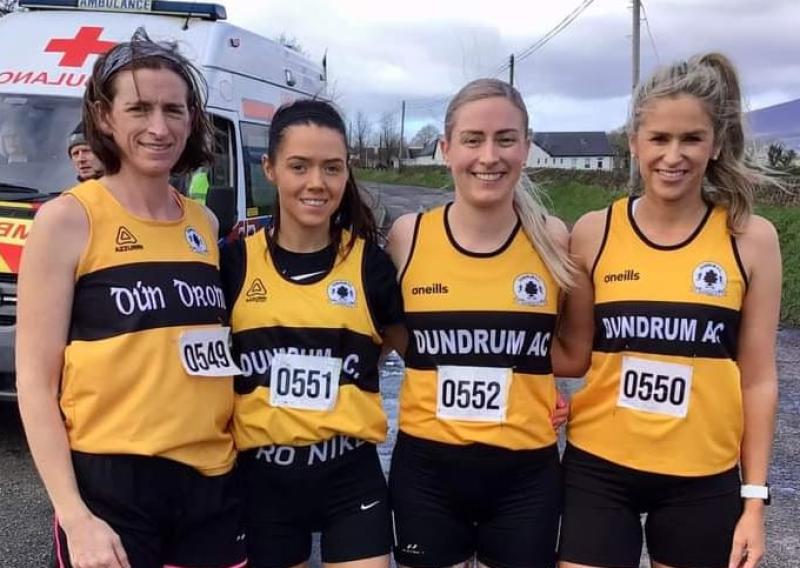 All roads led to Ballyneale last Sunday for the County Intermediate Road races.
The women’s 4k got proceedings underway. Soon after the initial surge, Aisling Ryan for Dundrum, making her debut in these Championships, went to the front and set a strong pace.
This strong pace saw her open a slight lead on the chasing pack. Then midway through the race she was joined by Suzanne Shine of Clonmel, and these two athletes matched stride for stride for the next mile. Then as the leaders came back into the village, Aisling put in a strong surge that saw her make every stride a winning one as she was crowned a worthy and convincing champion when finishing in 15 mins 30 secs.
This was a brilliant performance by this young athlete, and I am sure we will hear more about her in the months ahead.
Then we had Suzanne Shine also running very well when winning the silver medal in 15 mins 34 secs.
The battle for the bronze medal was a close affair. Then over the closing stages Mary Keane of Dundrum made her move and went clear to win the bronze medal in 16 mins 23 secs.
For the record Aisling English of Clonmel was 4th in 16 mins 31 secs. Caroline Godard of Clonmel was 5th in 16 mins 39 secs with Karen Coughlan of Dundrum 6th in 16 mins 48 secs.
In the team event Dundrum edged out the holders, Clonmel, by just one point to win the gold medals and win back the Cup last won in 2011.

MEN’S RACE
The men’s race was also competitive. Here the early lead was shared by the two main contenders, Mossy Bracken of Moycarkey Coolcroo and Aaron O’Donnell of Carrick-on-Suir, who won the gold and silver medals respectively in the County Novice last month. Then as they came back into the village with 5k to go, Mossy had opened a lead on Aaron.
From here on Mossy maintained that strong pace to come home a very worthy and convincing Champion in 26 mins 4 secs, brilliant performance by Mossy who is running very well at the moment.
Then we had Aaron also running well to win the silver medal in 26 mins 49 secs.
The battle for the bronze medal was decided midway through the last lap with Paddy Cummins of Moycarkey Coolcroo emerging from the chasing pack to win it in 28 mins 28 secs.
For the record Barry O’Shea of Carrick-on-Suir was 4th in 28:33, Paddy Bowden of Moycarkey Coolcroo was 5th in 29:01 with Conor Fleming of Clonmel 6th in 29:15.
In the team event the host Club Carrick-on-Suir pulled out all the stops and were crowned worthy champions. Their team consisted of Aaron, Barry, Patrick Roche 7th in 29:22 and Eugene O’Keeffe, in front of the home crowd, 9th in 29:35.
The silver medals were won by the Moycarkey Coolcroo quartet of Mossy, Paddy Cummins, Paddy Bowden and Paul Bowe.
The bronze medals were won by the Clonmel team of Conor, Cormac Healy 8th in 29:28, Michael Molony 16th in 31:57 and Eddy O’Donoghue 17th in 32:04.
The Carrick-on-Suir team of Aaron, Barry, Patrick and Eugene made club history as they were winning this title for the very first time, brilliant.
At the presentation of the awards, the County Chairman, Owen Fanning thanked the Carrick on Suir Club for promoting two great races. He also thanked all the Clubs for supporting these races.

County Road Relays
Moyne is the venue this Sunday for the County Road Relays which get underway at 12 noon. Both the women and men’s relays have the same distances, which are 800m, 1500m 800m and 3000m. In the relays a Club can have junior competing in the 800m legs of the events, so a good way to encourage Junior athletes to compete along side their senior members.