WOMEN’S RELAY
In the women’s race we had four teams competing. Right from the start Dymphna Ryan of Dundrum and Muireann Duffy of Clonmel set a strong pace that soon had them well clear of the chasing pack. Then as they came back into view Dymphna, the Munster Senior Road Champions had opened a good lead on Muireann. Then Dymphna handed over to Mary Keane with Muireann handing over to Ruby Carroll and here Ruby cut into the lead as they reached the third leg, the 1,500m, with Aisling Ryan, the County Intermediate Champion having a nice lead over Emma Murray. Here Emma began to close the gap as the race unfolded with her taking a slight lead over to the fourth member of the Clonmel team, Emma Murray with Catherine Fogarty on the last leg for Dundrum.
As this part of the race unfolded Emma maintained a strong pace all the way to the line to win in a combined time of 20 mins 10 secs with Dundrum winning the silver medals in 20 mins 44 secs.
The battle for the 3rd spot was between the two Moyne teams and here the combined efforts of Edel Delaney, Orla Healy and Sharon Cantwell edged it from their clubmates Lisa Quinlan, Brigid Gleeson, Aisling Maher and Ber Spillane for the bronze medals while the Moyne 2nd team won the gold medals in the B Section. 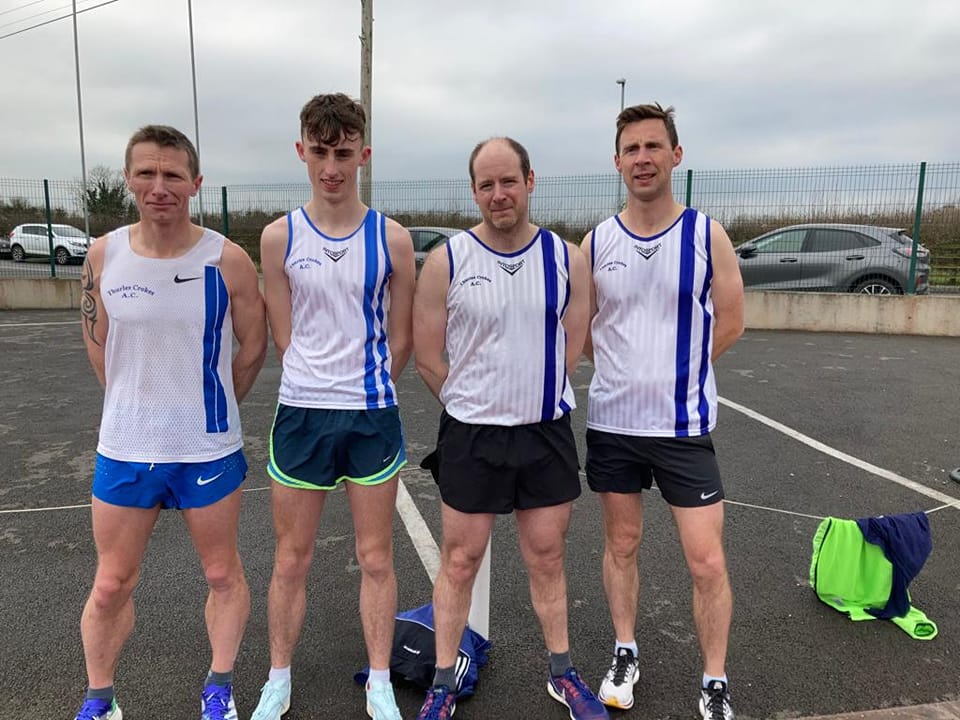 MEN’S RELAY
The Men’s event also proved very competitive and interesting right up until near the finishing of the combined distance of 6.1km and great credit must go to both Clubs, Thurles Crokes and Moycarkey Coolcroo. I tis also worth noting that the battle for the bronze medals was also very exciting between Dundrum and Moyne.
Back to the race. Here we had the County Novice and Intermediate Champion Mossy Bracken of Moycarkey Coolcroo and John Fitzgibbon of Thurles Crokes setting a very strong pace from the start. Then when they came back into view Mossy had opened a good lead on John and he passed the baton over to Paul with Shane Dorney running the leg for Thurles Crokes and he cut the lad as they approached the second changeover with Paddy Cummins of Moycarkey Coolcroo having a slight lead over Alex Crowley of Thurles Crokes and when they came back into view, the roles were reversed at the final change over with Liam Shanahan just ahead of James Dunne. These two athletes had a right battle over the final 800m with Liam just staying ahead of James despite a strong late challenge form James, brilliant efforts.
The battle for the bronze medals came down the last 800m leg where the combined efforts of the Moyne team of Brian Carroll, Jake Bowe, Michael O’Mahoney and Pakie Bowe went clear of the Dundrum team of Martin Keane, Sean Carew, Michael Moore and Declan Buckley.
Moyne are to be complimented on promoting these two Championship events for the very first time with both, the Clonmel women’s team setting a new Course record of 20 mins 10 secs, while the Thurles Crokes team also set a new course record of 18 mins 16 secs, just 2 seconds ahead of the gallant effort from Moycarkey Coolcroo.