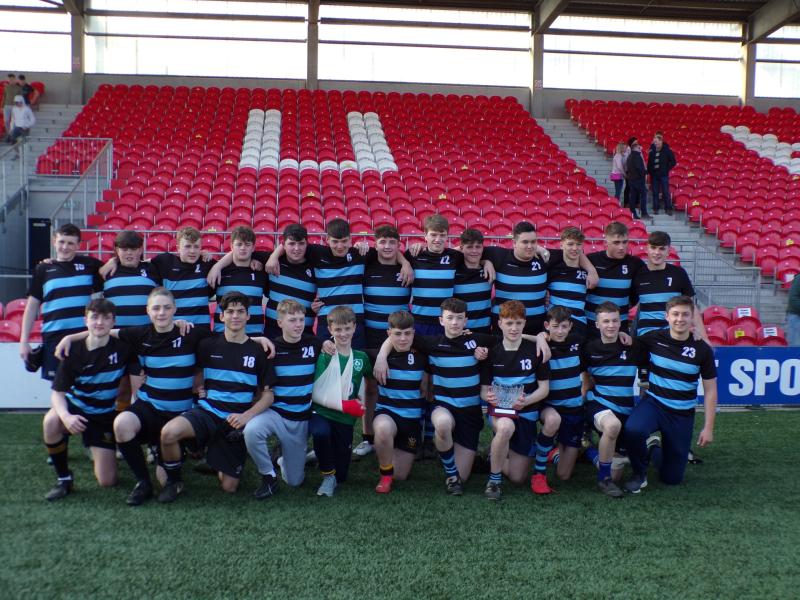 The Galtee Rugby team who won the East Munster Bowl when defeating Dungarvan RFC by 14-7 in the final played at Musgrave Park, Cork last weekend.

Galtee Rugby came of age in the intense bowl surroundings of Musgrave Park, Cork last weekend.
A concept developed to keep boys playing rugby delivered in spades as players from the combined Kilfeacle and District RFC, Clanwilliam RFC and Galbally RFC defeated Dungarvan in a pulsating encounter.
Galtee Rugby dominated the opening phases but Dungarvan held out and cleared, setting the tone for a cut-and-thrust encounter. A superb penalty from wide on the left by number eight Cian Ryan gave Galtee Rugby the lead on 10 minutes. Dungarvan turned over a sloppy lineout to force a goal-line stand on 15 minutes but committed and well- organised defence held them up, with captain and leader Evan Ryan getting under the ball. A goal-line drop out cleared the lines.

Another towering penalty by Cian McGrath made the score 6-0 after 18 minutes.
Galtee Rugby now took the initiative and after several heavy carries by the pack, notably by second row John Ryan, quick hands and clever footwork put the quicksilver fullback Josh Creighton- Snow over for an unconverted try on the right. A last-ditch covering tackle by the outstanding Creighton-Snow just saved a Dungarvan try before half-time, leaving Galtee Rugby in a commanding 11-0 lead.
A disastrous exit from the kick-off allowed Dungarvan in immediately on the restart to cut the lead to 11-7. The Galtee Boys composed themselves to force field position and another superb McGrath kick put them 14-7 ahead.
There followed 15 minutes of unrelenting Dungarvan pressure. A goal-line stand on 50 minutes was repulsed by brutal tackling and the ball was eventually held up over the line by Ryan Lonergan for a drop out.
Galtee Rugby are noted for their superb defence and it took two simply sensational interventions from Josh Creighton-Snow to keep the line intact.
The first tackle brought down Dungarvan’s impressive centre in the 22 after he had broken tackles on the left. The second was worthy of any rugby final. Following a searing break in the centre, during which Creighton-Snow was sidestepped, he miraculously recovered, made up the ground and, from a standing start, as Dungarvan players prematurely celebrated, he somehow caught and grounded his opponent under the posts.
A hectic final few minutes resulted with Galtee Rugby being forced to tackle for their lives.
The final whistle was greeted with jubilation as parents and supporters from all the three clubs invaded the pitch to celebrate.
Munster branch chairman Ralph O’Leary presented to bowl to Evan Ryan. Evan has played a captain’s role both on and off the pitch and gave an eloquent speech that made not only his own club but all three clubs proud.
Evan thanked all involved but gave special mention to the three men who gave selflessly of their time to coach, mentor and lead these young men on what has been a fantastic journey. They were Noel Leahy, Eamonn Buckley and Shane Kelly.