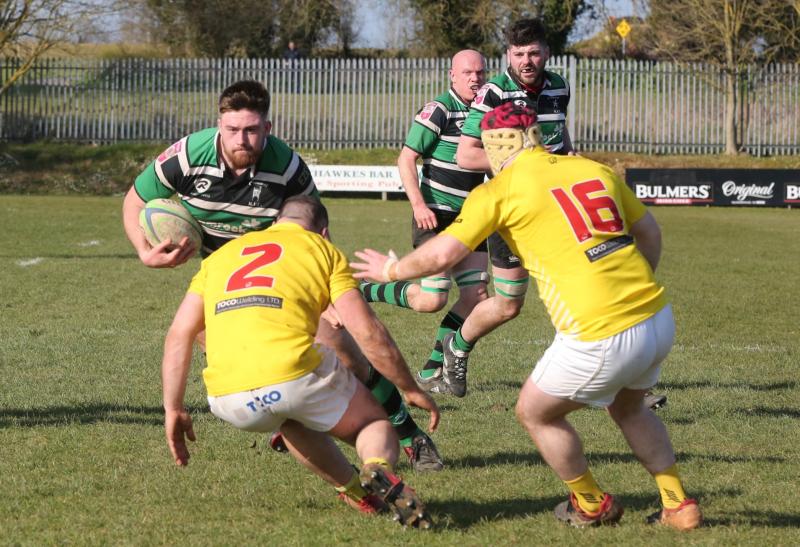 Clonmel’s number eight JJ McIlwrath crossed the line in the corner for Clonmel’s third try during the first half of last Saturday’s game against Bruff played at Ard Gaoithe.

Clonmel came up a point short in last Saturday’s round 16, All-Ireland League Division 2C fixture at home to Bruff RFC. The County Limerick visitors took the honours by the slimmest of margins, winning 24-25 in a game that Clonmel could have and really did need to win.
With only two games to go in the league, Clonmel’s young team is now four points adrift at the bottom of the table, with a long spin north to take on third placed Bangor and a final home game against ninth placed Sundays Well the remaining opportunities to pull something out of the bag and leapfrog two places out of the relegation play-off zone.
It’s a big ask, but entirely possible.
Throughout this campaign Clonmel have shown grit and determination and while not matched with winning results, it’s still all to play for.

Conditions on Saturday were perfect for rugby, with a light breeze, somewhat uncharacteristic for Ard Gaoithe, and brilliant sunshine encouraging a large crowd to come along and support both teams.
An opening penalty against Clonmel allowed Bruff early access to the scoreboard and the visitors went 0-3 up after only three minutes.
The next 25 minutes remained scoreless, with Clonmel and Bruff battling it out in continuous end to end play. Clonmel’s early attacking play was good, with frequent visits into the Bruff 22. However a knock-on and a turnover meant nothing accrued to the home side from the most promising moves. At the clubhouse end, Bruff pushed hard and Clonmel defended its line well.
However, it was a fumbled Bruff clearance on 30 minutes that allowed the chasing Luke Hogan to grab the ball and after a great run, drive over the line to register the game’s first try. The conversion attempt by Darren Cass was just wide of the mark. Clonmel nudged into a 5-3 lead.
The lead was short-lived however, as Bruff were awarded a penalty from the kick-off and went 5-6 up. Minutes later a break from Luke Noonan resulted in a well-worked home try under the posts, with the resulting conversion expertly dispatched by Cass.
Clonmel’s third try of the half followed an excellent lineout maul that had number eight, JJ McIlwrath crossing the line in the corner, but the conversion was just wide. The teams went to the half-time break with Clonmel holding a 17-6 lead.
The second half started with Bruff back on the attack from the get-go, with the visitors commanding much of the possession and territory. The pressure paid off with two converted tries in relatively quick succession changing the complexion of the scoreboard, with Clonmel suddenly trailing 17-20. Bruff continued to dominate play in the Clonmel half and were rewarded with their fourth try on 70 minutes. The conversion was wide of the mark and the score was 17-25.
Clonmel battled continuously in the final 10 minutes and Luke Hogan crossed the line for the home side’s fourth try, which Darren Cass converted. At 24-25, it was an agonising closing few minutes as Clonmel threw everything at Bruff in an effort to overcome the one-point deficit. However, it was not to be on the day and the final whistle blew with the spoils going to the visitors.
Saturday’s loss means Clonmel remain in 10th place in the table, with two games remaining. The bottom two teams will face each other in a home and away play-off, with the winner continuing to ply their trade in Division 2 next season and the losing team relegated to the Junior League. Clonmel can still avoid that fate, with games against Bangor away on this Saturday, April 2 and Sundays Well, the final game, at home on April 9. It’s a nervy couple of weeks ahead, but the lads are up for it. Fingers crossed!