Tipperary Rugby: Cashel run in six tries but still go down to Buccaneers in AIL 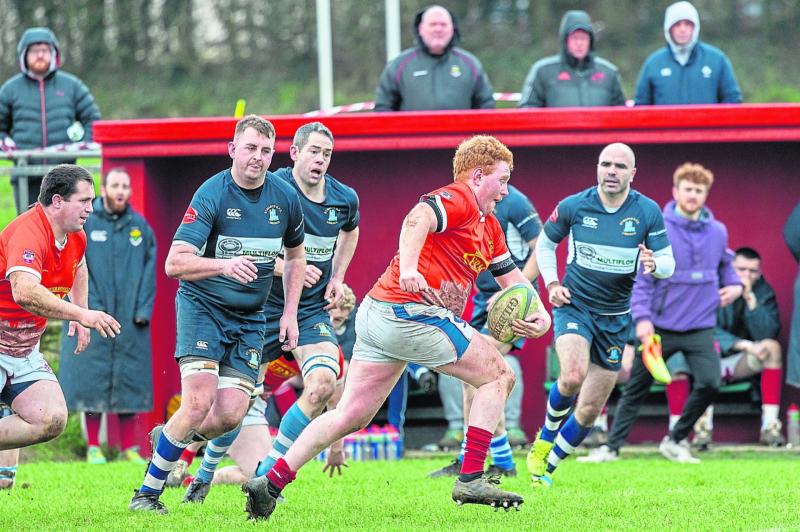 Philly Ryan, whose pick and dive enabled Cashel to score the fifth of their six tries against Buccaneers on Saturday last in a high-scoring AIL Division 2 game at Spafield. (file photo)

After 18 games in the All- Ireland League the sorting out has been completed. The top four teams in each division go into the semi-finals for the one promotion spot. The bottom two teams play each other home and away, with the winning team holding its place in the division. The other four teams have completed their season.
The fate of Cashel and Buccaneers was known before last Saturday’s encounter at Spafield, as they will now meet each other again in the semi-final at the same venue on April 23 and last Saturday’s result does not alter their finishing position in the league table with Cashel finishing second after a difficult start to the campaign.
In spite of all that both teams, while not fully loaded and one would think, not showing their hands, turned in an exciting and enjoyable performance to entertain the crowd.
There was a carnival atmosphere as the Sping sunshine obliged to take away the biting cold of recent times.
It took Cashel five minutes to register their first score after good work by the forwards resulted in Michael Kelly diving over for a try which Dan O’Neill converted.
Five minutes later the Cashel defence was caught narrow and Bucs took advantage to level the game. They went ahead with another try three minutes later when an attempted clearance was blocked.
Back came Cashel winning two penalties which they kicked to touch. A lineout maul rumbled to the line and Brendan Crosse was credited with a good forwards try.
Bucs kept the pressure on and were on the prowl again but a long Michael Hickey clearance pushed them back into their own half. Bucs were back again when Cashel were penalised for holding on at the breakdown. From the lineout they ran to the right wing and scored again. They had the try bonus point secured before the half hour mark following a 50/22 which gave them a lineout inside the Cashel 22. They ran to midfield and sent a clever grubber kick to the corner which their winger grounded to put them 26 points to 12 ahead. It was a huge lead which they held until half time.
From the kick-off Cashel started the second half on the attack. From a lineout Aidan Butler carried to the line. Brian O’Connor was on hand to touch down for a try which Dan O’Neill converted.
However poor defending allowed the Bucs number ten a clear run to score under the posts.
At 19-33 down something clicked in the Cashel brain and they went on the rampage. On 57 minutes a penalty was kicked to touch. Aidan Butler carried and Brendan Crosse went over for a try.
Young Herman O’Donoghue came on to make his AIL debut and did not look out of place as he carried to the line following a fine run down the left wing by Adam Dunne. Philly Ryan was on hand to pick and dive over for another Cashel try which Dan O’Neill converted.
With ten minutes remainging Bucs were running again on the half way line. Up stepped Adam Dunne again. He intercepted and ran from half way to score under the posts. Dan O’Neill converted and unbelievably Cashel were 38-33 ahead.
This was the time for cool heads and it was here the experience of Bucs came to the fore. From a lineout they whipped the ball to the backs, the ball was chipped through and they scored a converted try under the posts.
They scored three tries during the game from chips through to be chased down-certainly a takeaway for Cashel when the game is reviewed.
Bucs had the last word with a penalty on the stroke of full time to run out winners on a scoreline of Cashel 38 Buccaneers 43.
For a game with nothing at stake it turned into a twelve try event with both teams scoring six tries each. There will be learnings for each side but it will be a different story in two weeks time when the winner will take all.
Buccaneers have won their two encounters with Cashel this season and will be favourites.
Queens University will play Ballymena in the other all-Ulster semi-final.
The two winning teams will meet in a play-off to then decide the promotion spot, so three games to decide the division 2A champions. It promises to be an intriguing battle.
Cashel team (1-20): C O’Donnell, M Kelly, T Allen, B O’Connor, B Crosse, L Shine, A Butler, A O’Connor, M Hickey, D O’Neill, D Gallagher, J O'Rourke, A Dunne, O O’Sullivan, J O’Dwyer, J Blair, P Ryan, H O’Donoghue, J Pickering, M McCormack.