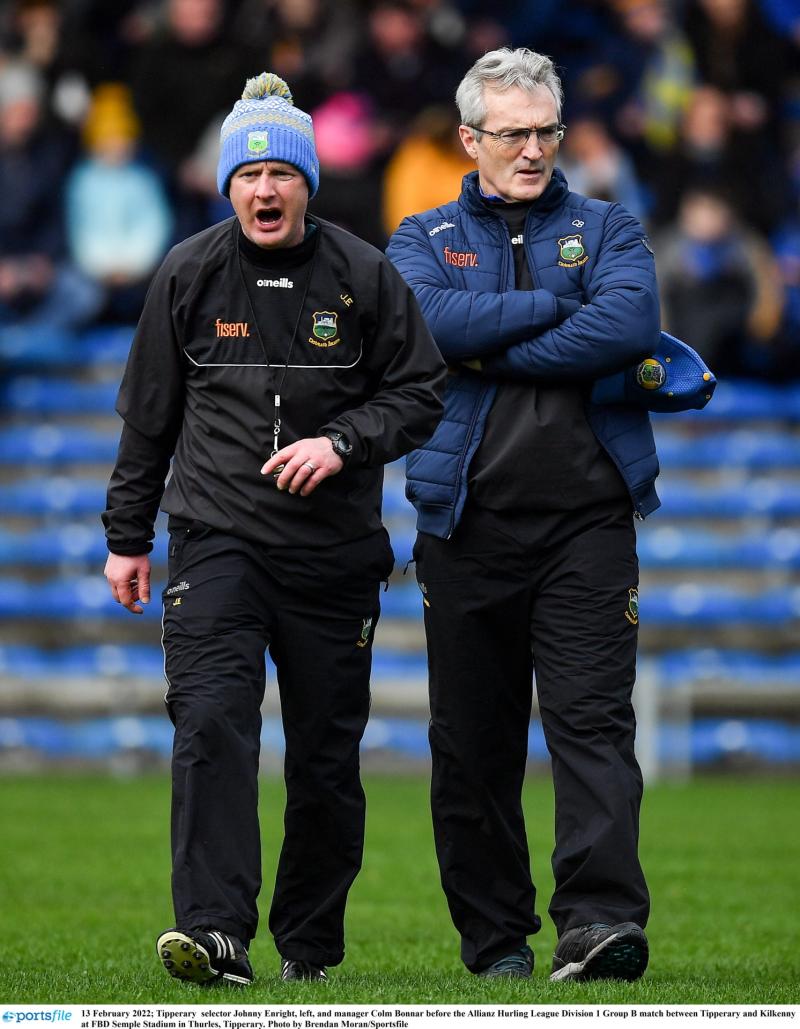 By their nature, Tipperary hurling supporters tend to be cautiously optimistic people.

Plenty of years of heartaches have ensured that the vast majority of those following the fortunes of the senior hurling team, don't get too carried away when it comes to making judgements about their credentials. And, even when confidence is flying high, there has always been that caveat - ‘if we hurl like we can’.

So, with all of this in mind, there are not too many people heading to Walsh Park, Waterford on Sunday, or turning in on TV, who would be making bold predictions about Tipperary’s prospects of emerging with victory - especially considering the scintillating form the Deise are showing at the present time.

At this outpost it is difficult to predict the Tipperary team, and that is not a good sign. Granted, we might be able to name twelve of the fifteen likely to take to the field to commence the battle, but where they will actually play is very much up in the air. The positive to be taken from this fact though, is that Tipperary have a multiplicity of options with players capable of adapting to many positions throughout the field - the key though is finding the best combinations.

Colm Bonner, Johnny Enright, Tommy Dunne and Paul Curran have spent the last few weeks fine-tuning their preparations and getting their own thoughts clear in the head. And, by the looks of it, in training, the players are sharp, focused and really looking forward to the stern challenge Waterford will bring to the opening round.

Tipperary will go in as rank underdogs for this one and Liam Cahill will be in the unusual position of having to ready his men for shouldering the favourites tag. That won't bother him unduly and he will spend his days emphasising to all the Deise hurlers that what has happened in the league matters not a whit now - championship is where it’s at and the league winning feat will soon be forgotten over the next five weeks or so.

While there are those who would suggest that Tipperary could have been better served with further league games to help nail down the team and gain further experience of their 'hybrid' style in high octane contests, there is also the counter-argument to be made. That is, that Tipperary needed the time to encamp; spend time together perfecting their approach; and really focus the minds on what is coming down the track.

They have engaged in a new style of play which takes time to ferment and this process only happens when all the ingredients are in the mix at the right time and at the right temperature. So, while fitness was being worked on, first touch might not necesarily be where it needs to be. While off-the-shoulder movement is being encouraged, doing it April daylight rather than in the floodlighted winter evenings is a different prospect. And then, you have the personnel issue - Tipperary had committed to throwing in the bodies during the course of the league in order to ascertain the credentials of as many players as possible - they managed to get a look at quite a few and many of those will be featuring again in the coming month or so as Tipp bid to get out of Munster and into the All-Ireland series.

Yes, Tipperary are in a state of flux. With up to five usual championship players not available this year, there had to be change and Colm Bonner has made a very determined effort to give everybody a chance to stake a claim. So, transition is the buzz word. But, with two educators in the management team, they know that, unlike in secondary school where transition year affords a chance to relax a bit, shoot the breeze and dare we suggest, even doss a bit, that will not cut the mustard when it comes to the Tipperary senior hurling team in Munster championship action. No, transition in this sense suggests the emergence of a new Tipperary with the blue and gold jersey being entrusted to a fresh cohort - the pressure is on them to deliver now.

Winning in Waterford would be nice, but we must remember that the Munster championship now is a marathon, not a sprint. And, the endline does not come into view until May 22 when Tipp take on Cork in Thurles. By that time, a lot of hurling will have been played, and the key will be to get to that day and still be in with a shout of progressing.

So, if the points cannot be gathered up in Walsh Park on Sunday, Tipperary will be looking for something to suggest that there is cause for optimism for the remaining games - especially the two home ties against Clare and Cork. Win those two games and the liklihood is that they will progress to the All-Ireland series where anything can happen. Lose either of those two games and Tipperary’s championship interest will likely be over before the last week in May.

So, Sunday is an important day for Tipperary. Easter Sunday could either see the Premier men rising to new heights, or finding themselves locked in a tomb of self-doubt and negativity.

Tipperary will improve as the championship progresses, so by producing a good solid performance, confidence can sky-rocket ahead of the clash with Clare.

There are still plenty of leaders in the squad to help drive the momentum, nurture the younger players and help with the mobilising of a movement towards better days ahead.

Losing in Walsh Park would not be the end of the world for Tipperary, but it would be a different story were the game to go in a similar manner to the league tie in the same venue, just over a month ago. We need to see progress; we need to see more hunger; we need to see more of a willingness to fight to the bitter end.

Let's hope we do.