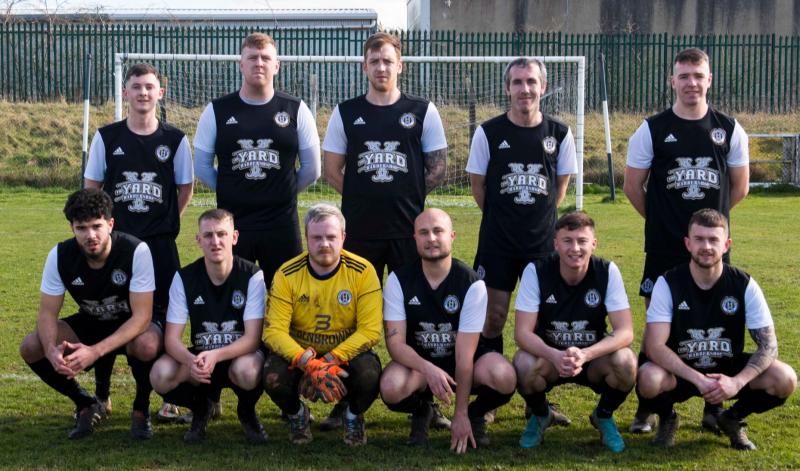 The Wilderness Rovers team who are through to the Paddy Purtill Cup final after their 4-3 against Galbally United in the semi-final on Sunday last. Pic: Michael Boland

Wilderness Rovers 4 – 3 Galbally United
After a disappointing league result the previous week, Wilderness Rovers bounced back on Sunday afternoon and claimed a place in this year’s Paddy Purtill Cup final, after a pulsating game against Second Division side Galbally United.
The hosts started the game well, creating a few half chances, but were rocked when a defensive error was punished and the resulting corner saw Declan Dineen score to put Galbally United ahead in the 20th minute.
The home side responded well and five minutes later good work by Ben Brown and Dean Clark created space to send a perfect ball into the back post for Danny Hogan to power an effort to the back of the net to make it 1-1.

All the weekend soccer results from Tipperary's TS&DL

Dominant now, the Wildies piled the pressure on, and got their reward just after the half-hour mark, when a great save by the visiting goalkeeper landed kindly at the feet of Cillian Hogan, who on the half volley stuck the ball in the top corner to put his side in front.
This was how the game went to the break, and it went into a bit of a lull in the early part of the second period.
It finally emerged from that lull in the 62nd minute when the county Limerick side again stretched the home defence and Jordan Dineen pounced on a mistake to return the game to parity at 2-2.
The wet conditions were starting to take their toll across the pitch and both teams turned to their respective benches to try to make a difference. But 11 minutes from the end, it was Ben Brown who found himself all alone in the box, and finished it into the bottom corner to put the home side back in front.
Three minutes later a great ball in from the wing found Graham Kelly in a pocket of space, and he held his composure well and added a fourth, and making it look like the hosts had finally broken their opponents’ resistance.
However, Galbally United just wouldn’t give up, and a minute from the end of normal time they pulled a third goal back through Declan Dineen to reduce the deficit to a single goal once more.
But that was to be the last score of the game and the home side held on, to give themselves another big game to look forward to in the coming weeks.