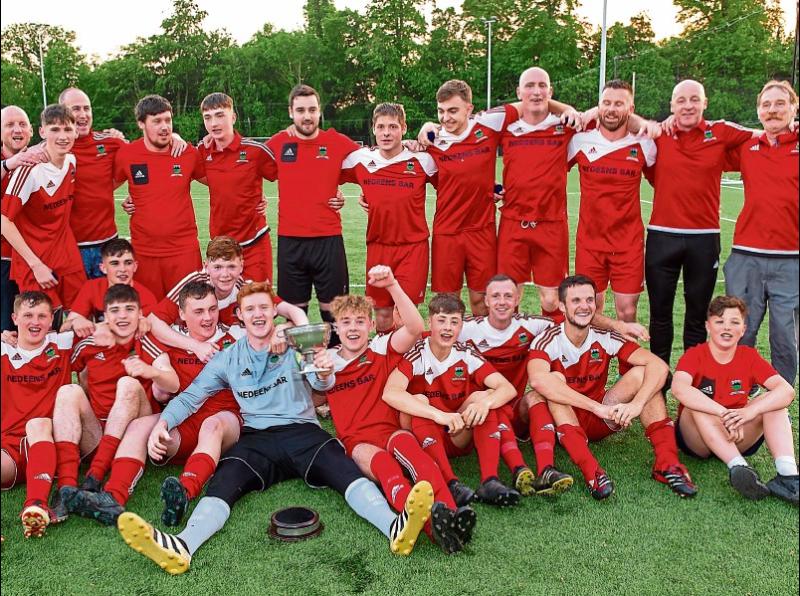 File Photo: Happy days of a Paddy Purtill Cup win for Vee Rovers from 2018 in a final against Peake Villa. Will they be smiling after next Sunday's game with Premier League survival at stake?

Two Mile Borris 2 – 1 Vee Rovers
Two Mile Borris continued their fine run of form of late to come from behind and garner a win that gives them their best league finish in years, but also condemns Vee Rovers to a final day shootout with local rivals Cahir Park to see who retains their Premier League status next season.
It was a game in which the driving rain made any kind of free flowing football difficult, but both sides still managed to create some half chances before the visitors took the lead in the 15th minute, courtesy of a goal from the penalty spot that was despatched to the net by Shane McGrath.
The rest of the half saw both sides trying to gain the upper hand in the midfield areas, but in the end they cancelled each other out and there were no more scores before the break.
This suited the visitors, but they were still in break mode when Borris equalised in the first minute of the second period, thanks to a brilliant header by Jamie Carey, who gave the visiting ‘keeper no chance.
After that the home side began to dominate, but looked like they had given up their advantage when they were reduced to ten men midway through the half. That gave the visitors an extra incentive to push, but despite a period of pressure they were unable to breach the home defence.
And things got worse for them when they were caught cold ten minutes from the end when a long free kick into the box broke to Lorcan O’Toole at the edge of the area and he swept the ball to the net to put the home side back into the lead.
After that is was a backs to the wall effort for Borris, as Vee chased desperately for a way back into the game, but in the end they were unable to do so, and left themselves an all-important game to stay up in the weeks ahead.

Sunday's game between Vee Rovers and Cahir Park will go ahead at 3 pm, with the Clogheen based side having home advantage.