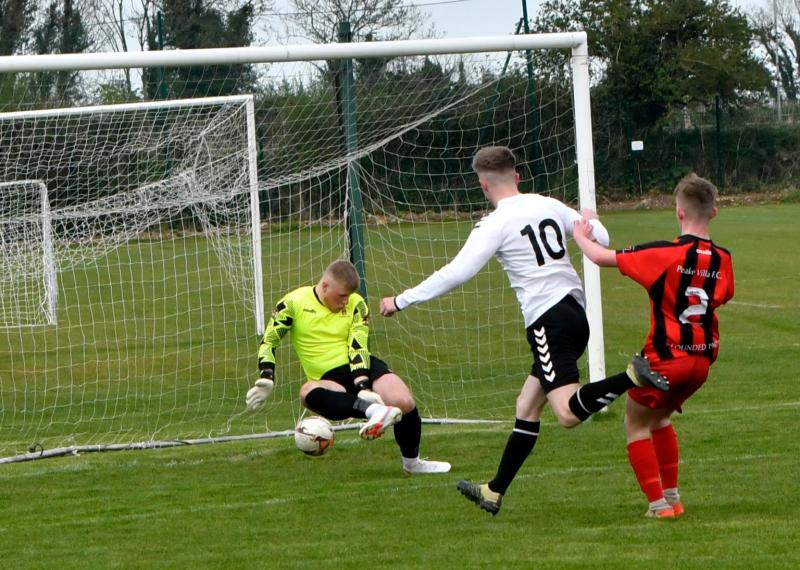 PEAKE VILLA 0 GALBALLY UNITED 1
In a huge game that has implications for where the final destination of this year’s Division 1 Youths title, Munster Youth Cup semi-finalists Galbally United travelled to league leaders Peake Villa on Saturday afternoon.
The strong breeze in the early part of the game made it impossible for both sides to play their normal passing game, but despite that Villa went close on two occasions in the first ten minutes.
But just as they thought they had taken the initiative in the game, they were caught cold by the visitors who broke down the field and got in behind the home defence to score a well taken goal scored by Cathal Mahoney.
The rest of the half saw Villa trying to get back into the game but the Galbally United defence held strong and kept Villa out.
The second half saw the home side playing against the wind and as they needed to strike back, the game opened up more seeing chances arise for both sides.
But despite Villa needing a goal the best chances kept falling to the visitors, and it took an inspired performance by home keeper Josh Coady to keep his side in the hunt. They eventually threw caution to the wind in the last half hour, but Galbally United showed why they are having such a successful campaign this season, and managed the game perfectly to take the three points and install themselves as favourites for the title.