Tipperary comfortably advance to Munster semi-final after win over Waterford 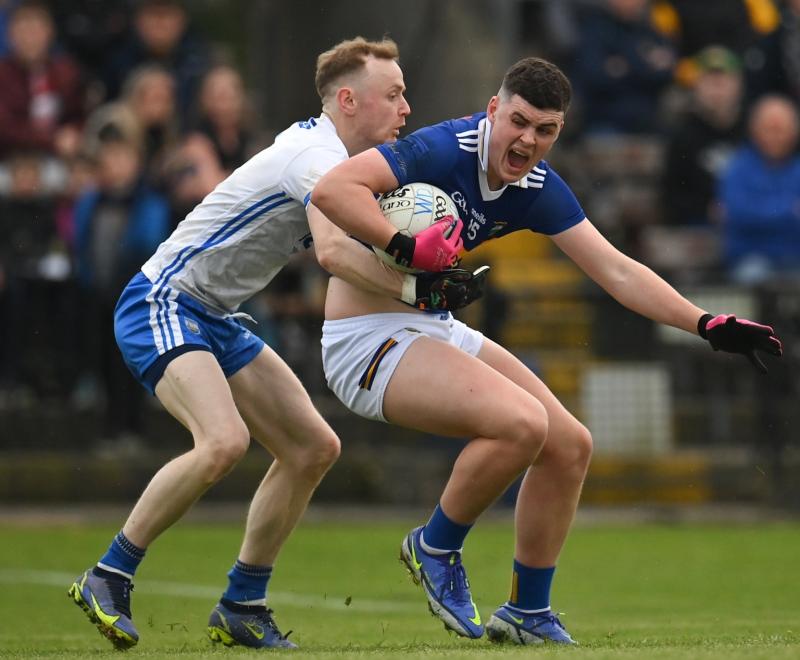 Sean O'Connor (Tipperary) under pressure from Michael Kiely (Waterford) in this evening's Munster Championship quarter-final game at Dungarvan. The Commercials man put in a fine performance with 4 pts

Tipperary footballers justified pre-match favoritism with a comfortable eight points victory over Waterford by 2-13 to 1-8 at Fraher Field, Dungarvan, this evening (Saturday). In what was a disappointing spectacle overall the visitors were much the better side throughout and fully deserving of advancing with this game well over as a contest long before the final whistle.

While the game itself lacked a lot in terms of excitement for the good-sized attendance, Tipperary manager David Power will be well satisfied that his side came through without too much stress in the end. His main concern may well be the injuries suffered by both Bill Maher and Kevin Fahey and whether they will be available for the semi-final against Limerick in Thurles on May 14.

With the exception of a brief few minutes at the start of both halves, Tipperary pretty much had it all their own way, and once they eventually got back on level terms after 24 minutes of the first half, there was never any doubt after that as to which team was progressing.

Tipperary went in at the break leading by 1-8 to 1-2, and while Waterford had the first two points of the second half to briefly stir the home support, Tipperary kicked on again. Once their second goal arrived in the 48th minute, they were home and hosed.

That goal was the highlight of the game, scored by the returning Steven O’Brien who missed the whole league campaign due to injury. Having come on in the 43rd minute, the towering midfielder instantly demonstrated what followers have been missing all year. O'Brien took a pass under the stand about 50 metres from goal and with power and pace cut through on a solo run before blasting home to put Tipp 2-9 to 1-5 in the clear.

Thereafter there was no way back from Waterford who had held Tipperary to a draw in the league opener in January. This time however there was a big difference and even when fielding seven championship debutants on the night Tipp never looked likely to go down to a shock defeat.

Tipperary had started slowly and found themselves 1-1 to 0-0 in arrears after just four and a half minutes. Dermot Ryan kicked them ahead in the third minute,  and soon after that the home side were awarded a penalty when James Walsh was fouled at the end of a promising move. Up stepped Jason Curry with an excellently struck spot kick and Waterford were four points up and ready to give the visitors a run for their money it seemed.

It took Tipp until the seventh minute to get on the scoreboard, a fine point from 35 metres out by Jack Kennedy. Two frees from Conor Sweeney followed, Tipp putting excellent pressure on the Waterford kick-outs with Conal Kennedy fielding superbly.

In the 11th minute Waterford replied with a Jason Curry free to lead 1-2 to 0-3 but this score was to be their last of the opening half - they failed to raise a flag over the next 25 minutes or so.

Slowly Tipperary began to assert themselves and a super point by corner-forward Sean O’Connor had it back to a one point game after 15 minutes.

Parity was restored in the 24th minute when a lovely flowing movement linking Bill Maher, Kevin Fahey and the two Kennedys saw Jack kick his second point of the game to level matters at 1-2 to 0-5. That action, however, was to be Bill Maher’s last of the game, the Kilsheelan/Kilcash man pulling up with a hamstring injury. 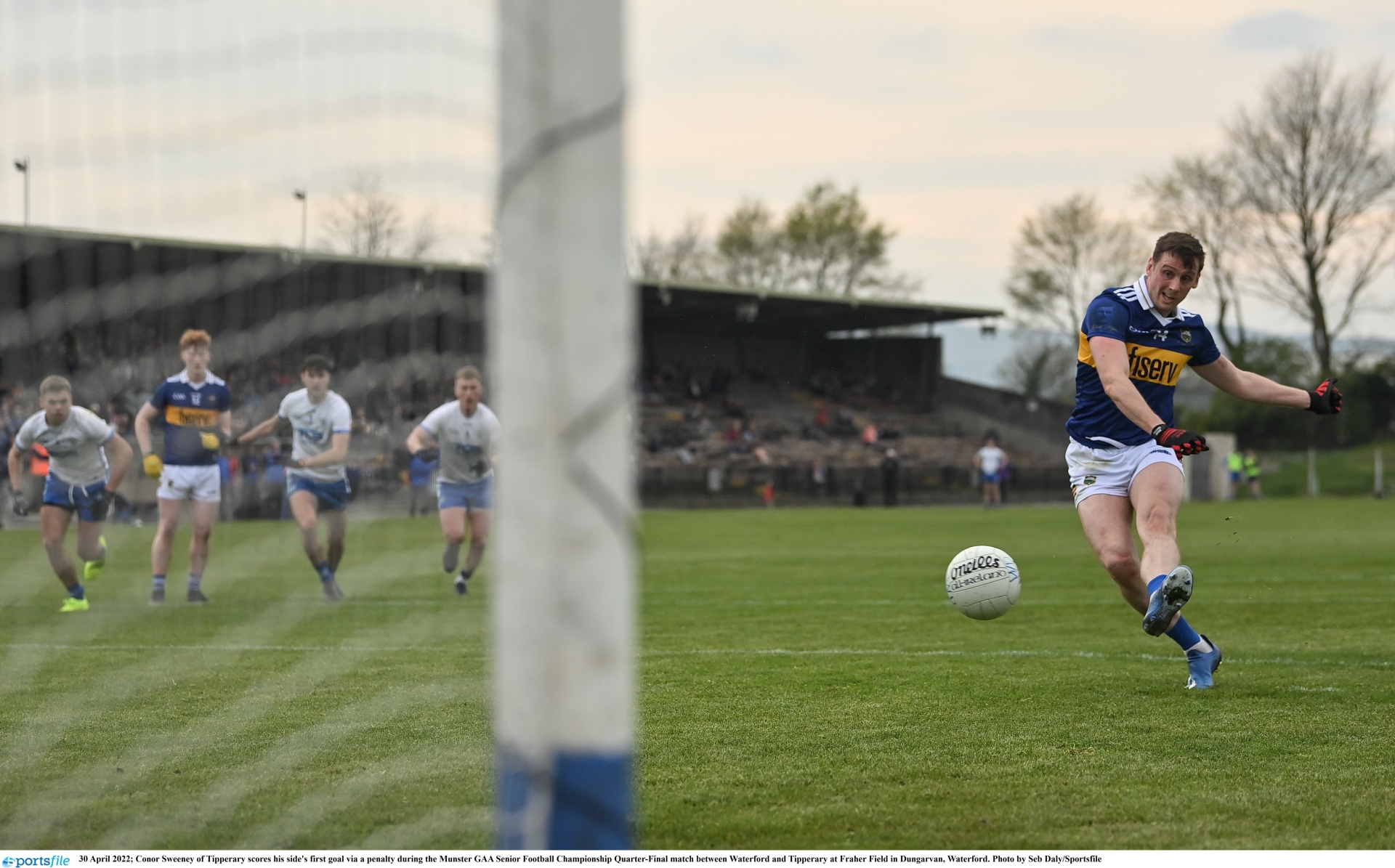 The game’s second penalty came the way of Tipperary in the 26th minute. A counter attack saw Colm O’Shaughnessy feed Sean O’Connor with a delicate pass into space and when the Commercials man was fouled by Michael Kiely on the edge of the area, up stepped Sweeney with a trademark penalty sending Paudie Hunt the wrong way.

With the pressure now somewhat off the visitors, debutant Mikey O’Shea added two points within two minutes to stretch the lead, the second  point was briefly a goal chance after Conor Sweeney's well-executed pass but the Mullinahone clubman wisely opted for the safer flag to make it to make 1-7 to 1-2 after 31 minutes.

The final score of the first half was another free by Conor Sweeney won by the hard-work of attacking wing-back Jack Harney.

Going to the break Tipp were full value at 1-8 to 1-2 and seemingly well on their way to a Munster semi-final.

As he had done at the start of the first half Dermot Ryan kicked a Waterford point, soon followed by a Jason Curry free to narrow the gap to four points. Two further placed balls by Jason Curry in the early minutes of the second half were kicked wide, opportunities definitely going abegging for the home side.

Nine minutes after the restart Sean O'Connor pointed superbly from a tight angle to get Tipp ticking over again, answered quickly by a long range point for Waterford from wing-forward Conor Murray.

Two Waterford frees within a minute of each other were both won by the hard-working Darragh Corcoran and converted by Jason Curry to make it 2-9 to 1-7 after 51 minutes of play.

But there was to be no magnificent comeback from the Déise, with the remainder of the game dominated by Tipperary who outscored their opponents by four points to one over the last 20 minutes.

In time added-on Tipperary's Liam McGrath, making a welcome return to inter-county football, was black-carded, having only come on 10 minutes earlier.

Overall there were some very decent displays from Tipperary with Conor Sweeney ably assisted in the scoring stakes by Mikey O’Shea and Sean O’Connor. In midfield the Kennedy brothers were prominent while in defence the likes of Sean O’Connell, Willie Eviston, Colm O’Shaughnessy and Jack Harney did well.