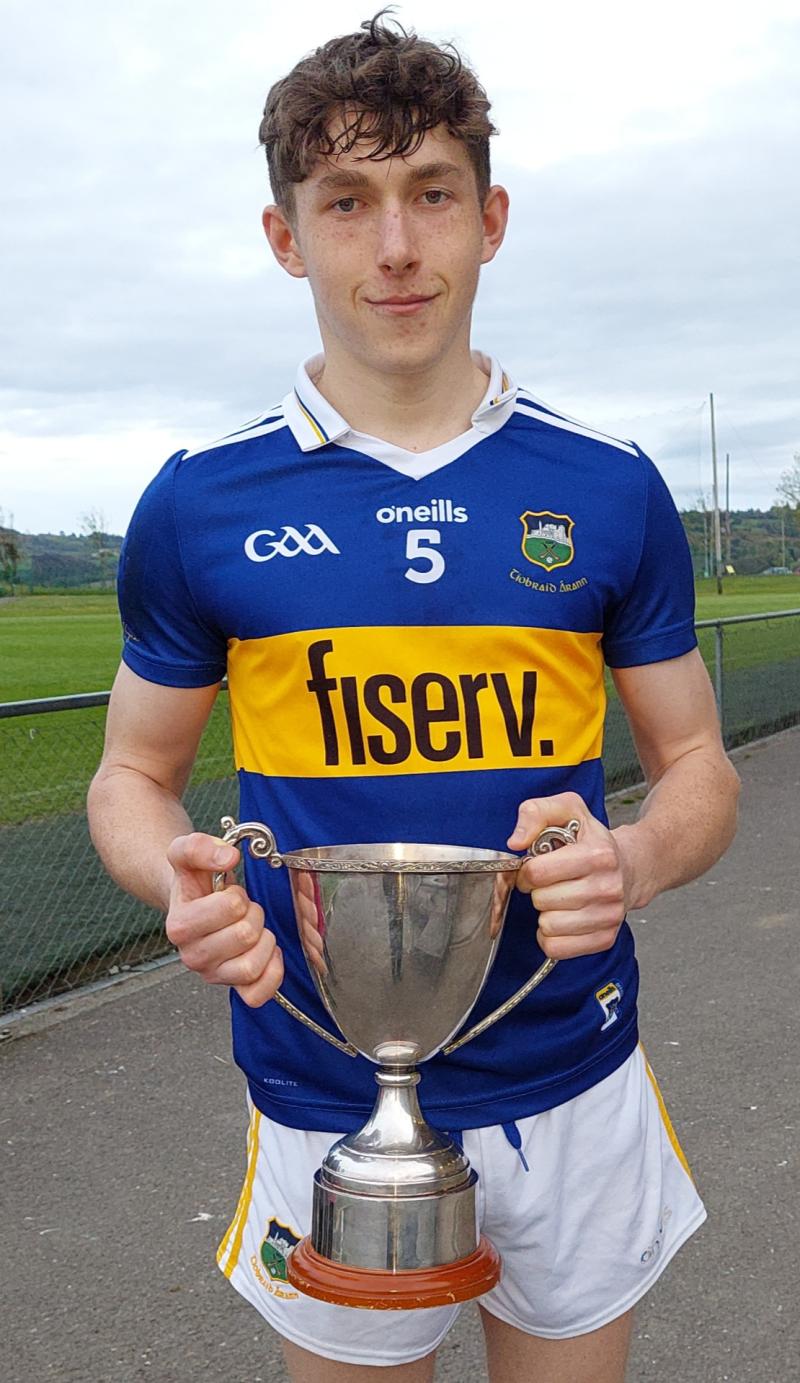 Tipp wing back, Eoin O'Connell, was proud to pose with the Daryl Darcy Cup after Tipperary had defeated Limerick in the Phase 1 final at Mallow this evening. The team was captained by Charlie King.

Tipperary minor footballers advanced to a Munster Championship semi-final in a fortnight’s time after a comprehensive victory over Limerick at Mallow this evening in the Electric Ireland Munster Phase 1 final. In the process they claimed the Daryl Darcy Cup, named in memory of the young Shannon Rovers and Tipperary footballer who died in 2008.

An early second half spurt in which they scored 1-5 without reply saw Tipperary repeat their round one victory over Limerick, this time in an even more emphatic manner than four weeks ago in Thurles.

But it took a goal after two and a half minutes of the second half by Limerick’s Aidan O’Shea to awaken Tipp who suddenly found themselves just a point to the good having gone in at half time comfortably enough ahead at 0–5 to 0-2.

But this improving Tipperary side responded magnificently when Limerick threw down the gauntlet with O’Shea’s early second half goal, and two excellent points in quick response from Daithi Hogan and Fionn Fitzgerald made it 0-8 to 1-2. Tipp had opened the second half with a Conall Grogan free after Ben Carey was taken down, a foul that saw Limerick’s Paddy Downey black carded for his troubles.

But as he had in the first round game against the same opposition, Fionn Fitzgerald goaled in the 37th minute when coming in from the right hand side and playing a one-two with Darragh Landers, the Killenaule corner forward blasting high to the net.

Soon the advantage was out to all of nine points with another free from Conall Grogan added to by man of the match Daithi Hogan.

After that the game was over as a contest and Tipperary went through the motions down the stretch to eventually win by 10 points, the last scores coming from Grogan (free), Hogan and Oisin Shelly who had just come on.

The second half performance was significantly better than the opening period.

The first half had been a tense 30 minutes full of turnovers, frees and misplaced passes by two nervous sides in their first real knockout game of the championship. Tipperary who had the better of possession in that opening 30 minutes of football would have been fairly satisfied to go to the half time break leading 0-5 to 0-2.

Tommy O’Connor had kicked them ahead in the second minute but it was back level by the fifth with Bobby Smith finishing a fine run with a lovely equalizer for Limerick.

Points from Ben Carey and Paddy O’Keeffe had the Premier leading 0-3 to 0-1 inside 10 minutes and after a lull in the scoring Joe Higgins kicked a 45m free in the 20th minute to stretch the advantage to three, 0-4 to 0-1.

A super solo effort by the always exciting Daithi Hogan made it a four point game after 23 minutes with Limerick having the last score of the half, an excellent effort by Tommy Ryan who ran 35 metres to point.

A huge moment in the game came in the 26th minute when Limerick were awarded a penalty at the end of a flowing movement, Luke Walsh hauled down by Tipperary full-back Ciaran Byrne. The Golden/Kilfeacle player was black-carded as a result but the damage was limited to just a 10-minute numerical disadvantage when Robbie McGrath saved the resultant penalty from Limerick vice-captain Bobby Smith.

Had Limerick scored that goal it would have sent them to the break level and with a huge psychological boost. It didn’t happen and Tipp were to make them pay in the second half.

While both midfielders and five of the starting six forwards scored, there were also excellent performances in defence with Ciaran Byrne, Charlie King and Thomas Charles starring. A notable feature was some brave blocking of attempted Limerick shots, Charlie English, Eoin O’Connell and King doing so magnificently. But as a unit, limiting Limerick to just 1-4 over the hour was an excellent night’s work.

Darragh Landers who came on at half-time also put in a big game and Oisin Shelly, as he has already proven, knows where the posts are and kicked a nice point with the only chance he got.

Tipp now await the semi-final next week between Cork and Kerry, with the losers of that game having a second chance of a place in the final when they play Tipperary.

Tipperary will have home advantage for that encounter against Cork or Kerry.